Tomatoes can now be grown in greenhouses faster and year-round, thanks to a gene identified at the University of Guelph from natural germplasm. This gene will ultimately allow growers to take advantage of increased sales from year-round production, and get higher market value for their produce in the winter months. 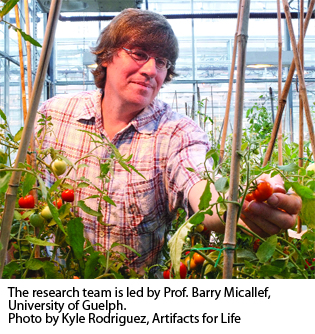 Tomatoes can now be grown in greenhouses faster and year-round, thanks to a gene identified at the University of Guelph from natural germplasm. This gene will ultimately allow growers to take advantage of increased sales from year-round production, and get higher market value for their produce in the winter months.

Prof. Barry Micallef of the Department of Plant Agriculture at the University of Guelph, along with his research team, identified the germplasm and discovered that it has a special gene called the extended photo-period gene. This allows it to thrive under 24-hour exposure to supplemental light, something other tomato cultivars haven’t been able to do.

“This germplasm responds so well to supplementary lighting, which will enable growers to extend the growing period into the
winter to take advantage of increased sales and higher prices,” says Micallef.

To overcome the challenge, the researchers examined various tomato cultivars to see how they responded to various photoperiod lengths. They were particularly keen to identify cultivars that thrived under longer periods of supplemental lighting.

What they found was that some tomato plants  didn’t respond to photoperiods longer than 14 hours, and in some cases responded negatively if exposed to light for more than 18 hours. However, a miniature tomato cultivar proved the exception and was able to survive under 24-hour lighting conditions.

They found plants without the extended photo-period gene lacked co-ordination when exposed to long periods of supplemental light. This meant the plants had irregular uptake of solutes and had difficulty incorporating nitrate fertilizers into protein and other nitrogen compounds, necessary for the plants to grow. When plants without the gene were exposed to an extended photoperiod, nitrite – a toxic compound – would develop when the plant was trying to convert the nitrate fertilizer into proteins. As the nitrite builds up, it renders the proteins in the plant leaves inactive.

To effectively control the photoperiod in the trials, the research team used special greenhouse chambers at the Vineland research station. The chambers simulated greenhouse conditions and ensured consistent supplementary lighting.

Now the researchers are taking the nitrite problem down to a biochemical level to see why it’s occurring and find a solution.

They are also studying if the extended photoperiod gene can be implanted into other cultivars to allow them to grow under those conditions.

For more information on this research project, contact Prof. Micallef at bmicalle@uoguelph.ca.

Other partners involved in this project include Prof. Bernard Grodzinski, post-doctoral fellow Malgre Micallef, master’s student Lorraine D’Silva, and research associate Mary Robison, all of the Department of Plant Agriculture.

This research is sponsored by the Ontario Greenhouse Vegetable Growers, the Ontario Ministry for Agriculture, Food and Rural Affairs, and the Natural Sciences and Engineering Research Council. n

Kaitlyn Little is a writer with the SPARK (Students Promoting Awareness of Research Knowledge) program at the University of Guelph.