Ron Wray’s passion for plants, dedication to teaching and unyielding pursuit for improvement put him in the top spot for the 2021 Grower of the Year award. 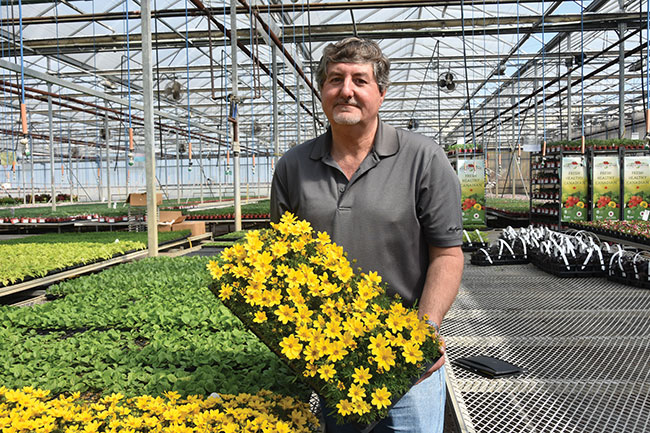 When Ron Wray first stepped into the greenhouses of Fernlea Flowers in Delhi, Ont. 37 years ago, little did he know that it would be the start of a fulfilling decades-long career.

Graduating from an undergraduate plant science program at the University of Guelph, Wray was hired as an assistant grower by then production manager Melhem Sawaya and owner Joe Howe Sr. Within two years, Wray was promoted to grower, moving through the plugs, cuttings and finished product departments. He became head grower in 2015, overseeing a team of 12 in Delhi, while collaborating with Fernlea’s four nurseries in Florida and one in California.

“In my job, I work with many skilled growers who do their jobs very well,” says Sawaya, who now consults for Fernlea. “What differentiates Ron is his character of solving problems …calmly, systematically, [while] getting the input of anyone that he thinks could be of benefit. His ultimate goal is solving the problem, [no matter] who does it.”

Described as a fountain of information, no question is too little. But Wray doesn’t simply provide the answers. He often challenges his staff to put on their thinking caps as well.

“He has this ability to [help] a person come up with a solution to a problem without telling them the solution,” says Bobbi Robinson, an assistant grower at Fernlea who has worked with Wray for over 20 years. “He sees potential in people and draws it out.”

“I first worked for Ron while he was the plug grower at Fernlea, many moons ago. This was back when we watered mostly everything by hand, and I was on the end of a hose all day, every day,” she recalls. “Even then, he was always so kind to us ‘little people.’ He always stopped to say hello and encouraged us to ask questions.”

Continuous improvement is key for Wray, who always looks for ways to take things to the next level. He encourages staff to advance their knowledge and put it into practice. His management style has fostered a collaborative environment for the sharing of ideas, information and workload.

“If we have a project or trial we are working on, he will push us to take it to the next step, to see if we can improve more,” says Robinson. Currently trialling new lighting and fogging techniques, the team is already seeing improvements to their product.

Over the years, Wray’s work has also reduced the use of conventional pesticides in the greenhouse and kept Fernlea at the forefront of this rapidly evolving practice.

“I remember spraying weekly or sometimes twice a week throughout the whole range, just to keep insects under control,” Robinson recalls. “Now, using biologicals and bio-friendly chemicals to reduce pest populations in our propagation houses, we have very much improved the quality of our finished product as we have been able to use far less pesticides in the finishing areas.” 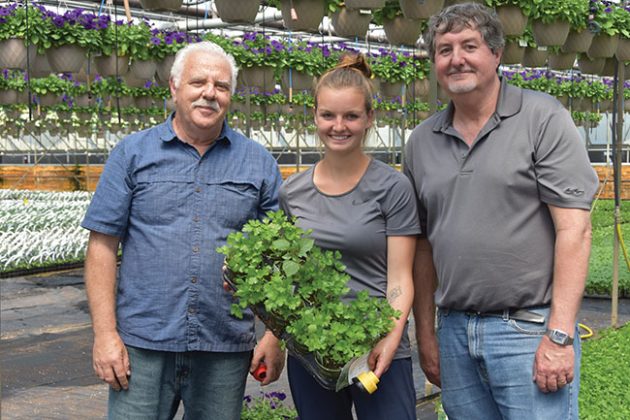 The people at Fernlea, both past and present, are another source of motivation for Wray, who’s pictured here with Larry Nigh [left] and Jette Vanadrichem [middle].
PHOTO: M. Sawaya

While some growers will find a growing recipe that works and stick to it, Wray looks to the plants for cues.

“A plant tells you a lot of things just by looking at it. It can tell you a lot about its environment, its past, whether it’s stressed,” he explains. “You have to be very, very flexible…and be in-tune with what’s going on in the greenhouse.”

While working as a grower in Fernlea’s plug area, Wray would pull out his sketchpad, documenting the roots, leaves and general morphology as the plantlets progressed. The sketchpad was eventually replaced by a digital camera and phone, amassing hundreds of thousands of images that would become essential training tools for new employees.

“I think some people need that visual,” he says. “This is what you’re looking for at a certain day. If you’re not there, why aren’t you there?” Cross-referencing with other greenhouse records, they revisit what was done from planting onwards, helping staff understand the crop’s needs at different stages of development and whether they’ve been met. And while modern software has helped to automate control of the greenhouse climate, Wray finds that the user still needs to understand plants before they can make the most of it.

“If they’re growing too aggressively, if they’re not growing fast enough, if the roots are in good shape or not in good shape – the plant will tell you.”

When asked what motivates him to do what he does today, Wray says he originally came for the plants but has been completely taken by the people in the industry, both in and outside of Fernlea.

“The people I work with every day are the ones that make all the magic happen,” he says. “I’m really grateful for that.”

One of the highlights of his job has been working with students spending their summers or after-school hours at Fernlea. “You get to watch them evolve…and then to see them go on and be successful doing other things.” Teaching and passing down his knowledge, especially to the next generation, he finds great satisfaction in showing others how to appreciate the complexity of plants while continuing to discover them himself.

“I never stopped being a student, especially in growing plants,” he says. For almost four decades, he’s collaborated with the greenhouse sector all over North America and around the world, forming a network for sharing and learning.

The average career length at Fernlea speaks volumes. Most on Wray’s team have stayed for over 20 years, with one recently retiring after 47 years. As more approach retirement, Wray says they’re on the lookout for young, budding horticulturalists.

COVID has been a wakeup call, he says. While the industry was heading towards automation, he feels that the pandemic has emphasized a greater urgency for automated solutions and a call to be less reliant on a seasonal labour force.

Luckily, he’s noticed a resurgence in horticulture in recent years, which was accelerated by COVID. Though Fernlea lost out on early sales due to COVID closures in 2020, they quickly sold out of product once garden centres were able to reopen, particularly in their ‘Harvest Thyme’ vegetable line. This year, items sold ahead of schedule, where some meant for week 21 were gone by week 19 or 20.

Perhaps that appreciation for plants will bring new interest to careers in horticulture, as it did for him over three decades ago.

“Love what you do and do what you love. If you enjoy what you’re doing, it’s never really a job.”

Growing with the times

Started in 1939 by Lloyd and Mary Veit, then succeeded by their daughter Virginia and husband Joe Howe in 1974, Fernlea Flowers has grown to become one of the largest greenhouse operators in North America.

As Wray’s team winds down their spring bedding plants for Canadian sales, they gear up to propagate tropicals for their southern locations in the U.S., including four nurseries in Florida with 250 acres of production space, plus one leased location in California. The products will then continue to grow over the winter for Home Depot U.S.

Next spring, some of those tropical materials will make their way back to Ontario for repotting, in time for late spring sales at Lowes and Walmart in Eastern Canada. 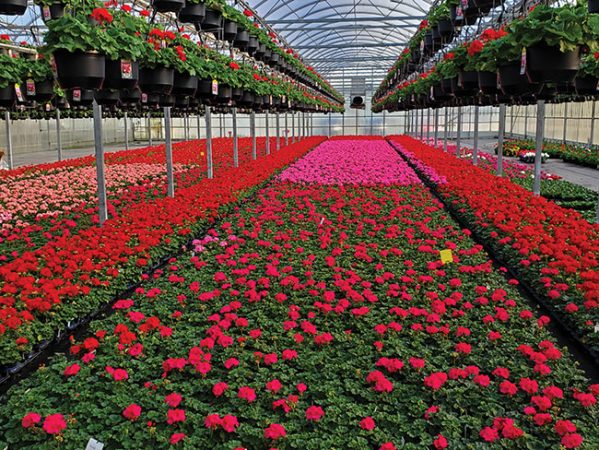 The business is markedly different from Wray’s early days. Growing mostly flats and baskets at the time, plants had generic tags and labels that could be sold to whomever wanted them. “Now every customer has their own labels, their different pots,” he says.

The crops have also changed. “When I started here, we were probably the largest poinsettia grower in Canada. We were doing about a million and a half poinsettias,” says Wray. The operation ceased poinsettia production in 2004. They’ve also reduced their Icicle pansies program in the past 20 years, using most of the outdoor area for fall mums.

Over the past few decades, Wray’s witnessed a progressive move towards containers and higher end products such as tropicals. They currently grow dipladenias, hibiscus, Red Star spike, flowering cucurma, ferns and more – all of which have filled the gap between spring and fall crops.

When he’s not in the greenhouse, Ron Wray can be found in his backyard tending to giant pumpkins and squash grown for the annual Norfolk county fair and other competitions. It’s a hobby that he says many people, including his wife of 36 years, don’t quite understand.

“We’ve grown giant pumpkins ever since we’ve been married, and my wife still to this day doesn’t know why I work in a greenhouse with plants all day and then come home and work in the garden,” he shares.

The largest pumpkin he’s grown so far has reached 1,301 Ib. 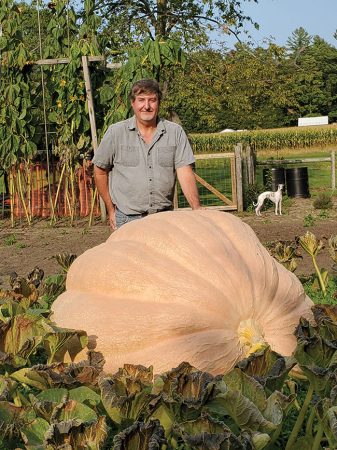 Looking to nomination someone for the 2022 Grower of the Year Award? Check out the details here.