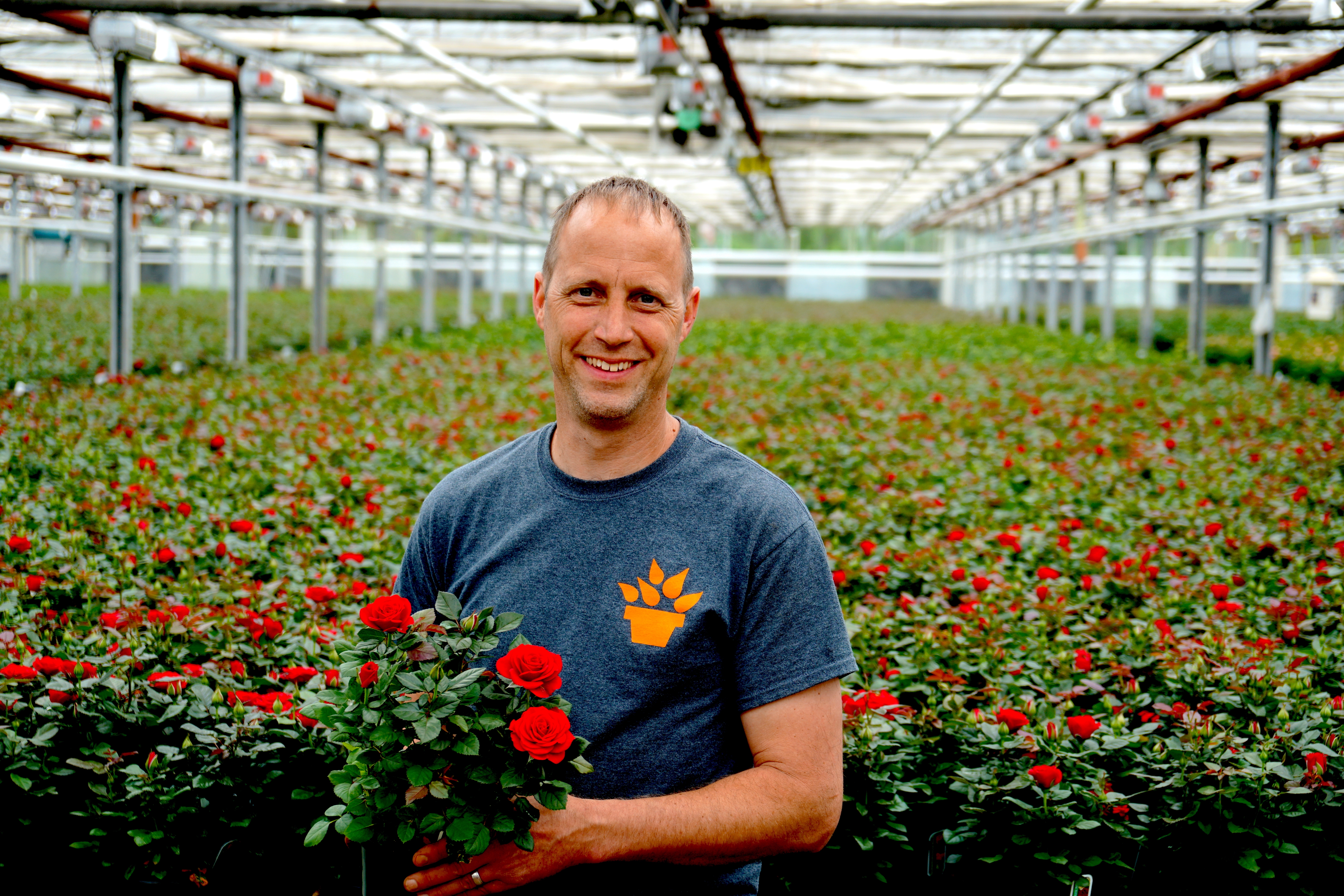 “I started working part-time for Harster Greenhouses when I was about 15 years old,” says Adrian Kemper. His first summer was spent painting heating pipes. From there, he went on to tackle numerous different roles, ranging from order processing to greenhouse building.

That path eventually led him to Aldershot Greenhouses where Kemper is now head grower.

Described as a phenomenal, hard-working individual with a strong passion for flower growing, Kemper can be found in the greenhouse at almost any time of the day. “Whether it be 3 am or 3 pm, you will find Adrian in the greenhouse getting his hands dirty,” says Duane Vander Lugt, inventory and procurement manager at Aldershot Greenhouses.

Having worked for the past 12 years at Aldershot, Kemper has become a key member of the operation and instrumental to their flower production program. From propagation and finishing to growing mother stock, Kemper oversees different stages of production for their miniature roses, hydrangeas, poinsettias, hellebores, gerbera and chrysanthemums.

“I love working with plants,” he says. “I love how you can manipulate a plant with climate, PGRs, light, [and other factors].”

Always on the lookout for new products, Kemper travels to Europe two to three times each year to attend tradeshows, and at the same time, visits some of the industry’s leading operations to learn and better understand their production processes. He then adopts these techniques and implements them in his own work at Aldershot, says Duane.

Through his travels, Kemper has found that the technology and practices in Holland are ahead, taking about 10 years’ time before they reach North America.

It’s no surprise, then, that all the ornamental genetics grown at Aldershot originate from European breeders. When overseas, Kemper searches for new varieties of roses and hydrangeas, then works with breeders to better understand the genetics and discuss growing techniques before trialing and introducing them to the North American market.

Aldershot’s hydrangea program in particular has benefited from Kemper’s work, which has now been expanded and tailored to include varieties that better suit the climate at Aldershot and those of their customers, says Aaron Vander Lugt, general manager at Aldershot Greenhouses. “Whether it be a new crop, a new method for growing an existing crop, or new product trials, you can always find a few benches in Adrian’s greenhouse where he is trying something new.”

A forward-thinker, Kemper is known for his meticulous notes and taking detailed records each season. He puts them to good use, helping himself and his colleagues overcome new and different obstacles each year. “Whether it be notes on PGR applications, new variety selections, new crop development, crop spacing plans or pest management, Adrian has a library [of them] that has proven invaluable time after time,” Aaron remarks. “Many times, if one grower is struggling in a particular area, Adrian will trial different methods alongside the grower to help overcome the obstacle faster.”

Humbly accepting the news of his award, Kemper credits his two assistant growers and Aldershot Greenhouses for their progressive thinking and commitment to growing quality product. It would be impossible without them, he says. “They have given me every tool and the means to be able to succeed at what I do.”

Related
Grower Day highlights new greenhouse technology
How does a consumer value a plant?
Looking back towards the future: State of the industry
Making the most of your predatory mites