Possible interactions among biocontrols for fungus gnats.  Simultaneous release of several biocontrols that occupy the same niche could have a negative effect 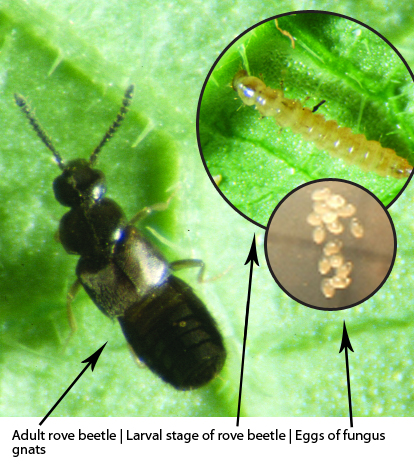 The rove beetle is still very new to commercial users of biocontrol, and while simultaneous release of all these available biocontrols for fungus gnats could result in wonderful suppression of this insect pest, it is also possible that we may not achieve the results anticipated. Research at the University of Guelph was completed a few years ago (Sarah Jandricic – M.Sc. thesis) that shed some light on how release of Hypoaspis and S. feltiae and application of some pesticides impacted the effectiveness of the rove beetle as a fungus gnat biocontrol.

THE ROVE BEETLE AS A PREDATOR OF FUNGUS GNATS, SHORE FLIES AND THRIPS PUPAE
Laboratory studies showed that given a choice, adult rove beetles eat similar numbers of eggs of both fungus gnats and shore flies. One adult ate an average of 2.6 fungus gnats and 1.7 shore fly eggs
within 24 hours, when both pests were present at the same time. However, rove beetle adults preferred first-stage larvae of fungus gnats over those of shore flies, and also over thrips pupae. Rove beetle adults ate, on average, 4.4 first-stage larvae of fungus gnats within 24 hours, but only an average of 2.0 and 2.6 first-stage shore fly larvae and thrips pupae, respectively, within the same period.

INTERACTIONS OF THE ROVE BEETLE AND HYPOASPIS
Laboratory trials showed that the rove beetle attacks all stages of Hypoaspis, particularly younger nymphal stages. Within a 24-hour period, adult rove beetles ate all 20 Hypoaspis eggs that were offered
to them. Regarding consumption of Hypoaspis nymphs, a rove beetle ate approximately 14 younger nymphs (two to five days old) and six older nymphs (seven to 10 days old) in a 24-hour period, while only negligible numbers of adult Hypoaspis were killed. On the flipside, Hypoaspis attacked all larval stages of Atheta, but preferred first-stage larvae, consuming about six within 24 hours.

EFFECT OF PARASITIC NEMATODES ON ROVE BEETLES
These tests were conducted using 10-cm plant pots filled with standard potting mix, in closely simulated greenhouse conditions. Here, the parasitic nematode (S. feltiae) were applied to the pots at the rates of 25, 50 (recommended rate), and 100 infective juveniles per cm2. Twenty juvenile beetles were then added, and the number that survived to adulthood was counted. Compared to pots treated with water only, the highest nematode treatment (100 infective juveniles per cm2) only killed about 25 per cent of the beetle larvae before they could turn into adults, which would be considered non-toxic by pesticide standards. Other trials also indicated that the nematode was not able to infect adult rove beetles or reproduce inside them.

EFFECT OF INSECTICIDES ON ROVE BEETLES
Soil drenches of cyromazine (Citation 75WP), diflubenzuron (Dimilin 25WP), and imidacloprid (Intercept 60WP) were applied to a commercial potting mix as per Canadian label rates. Another treatment consisted of a soil-surface spray of bendiocarb (Trumpet 80WP) as per label directions. When larval and adult rove beetles were added to the insecticide-treated potting mix, the bendiocarb and imidacloprid treatments resulted in over 90 per cent mortality after 96 hours. Cyromazine was significantly less toxic than these latter two treatments to adult rove beetles, but resulted in 65 per cent and 85 per cent mortality to third-stage and second-stages, respectively. Diflubenzuron caused the least mortality in all stages and was considered non-toxic. These results suggest that depending on choice of insecticide during the season, applications can significantly reduce any established populations of rove beetles in a greenhouse.

CONCLUSIONS AND IMPLICATIONS FOR PRACTICAL USE
The above results indicate that application of S. feltiae is compatible with releases of the rove beetle, and most likely Hypoaspis, although this study did not address the latter. But it appears that simultaneous release of the rove beetle and Hypoaspis could negatively affect each other. Given that this part of the study was carried out in an artificial environment, the results described could be just an indication of what will happen if the primary food source (i.e., fungus gnats and shore flies) were in short supply in a practical situation.

At the same time, these results do alert us to the fact that simultaneous release of several biocontrols that occupy the same niche could have a negative effect, resulting in an inefficient biocontrol program.

Certainly, further studies and observations under commercial conditions are needed to determine the effects of simultaneous release of the above biocontrols. In the meantime, growers are encouraged to pay close attention to population trends of both pests and biocontrols, particularly when more than one biocontrol agent is in use. This recommendation applies not just to fungus gnats, but to other pests for which multiple biocontrol agents are used.