Greenhouse cucumber growers could soon have more help in dealing with powdery mildew. 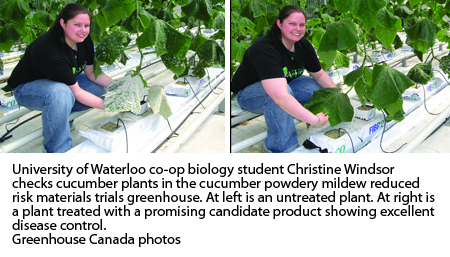 Greenhouse cucumber growers could soon have more help in dealing with a major disease threat.

Plant pathologist Dr. Ray Cerkauskas has been working with Gillian Ferguson, greenhouse vegetable IPM specialist with the Ontario Ministry of Agriculture, Food and Rural Affairs, assessing the efficacy of a number of reduced risk materials to be used against cucumber powdery mildew.

In some cases, these are materials available in other countries and registered on other crops. There was phytoxicity with application of some of the materials. However, by reducing the rates significantly, “we still had efficacy, but we didn’t have the phytotoxicity.”

Ferguson is in regular contact with growers and other members of the industry, and that’s played a major role in the success of the project. “The materials we’ve looked at are materials being considered by industry or are being used by companies in other contexts or disease situations.” These materials, the team believes, have a good chance of being suitable products for control of powdery mildew on cucumbers.
Growers currently can use Milstop or Nova for cucumber powdery mildew control. With few control options, the potential for resistance buildup is a concern. That’s led to a second and related research project, this one focusing on Nova. Some growers, said Dr. Cerkauskas, “are finding their applications are less efficacious.”

His research team is currently taking cucumber leaf samples from greenhouses throughout southern Ontario. Powdery mildew is taken from these leaves and transferred to small disks of tissue that have been punched out from the cotelydons of other cucumber plants. These plants would have been sprayed the day before with different concentrations of Nova. They will then wait to see if there is any growth of cucumber powdery mildew after about 12 days. “If there is growth, then we know that the fungus is able to tolerate residues of Nova on plant tissue. It would suggest, depending on the concentration, that there is some resistance.”

Milstop, in his experience, requires reapplication every seven days.

“We want to get something else available to growers, so they can rotate the materials in order to avoid resistance buildup.”

In addition his many formal projects, Dr. Cerkauskas also provides diagnostic assessments of possible disease samples from area greenhouses. “We work very closely with Gillian when it comes to disease problems being experienced by growers.” She will bring in plant samples showing possible symptoms of disease. “Most of the time she will know what the problem is, and sometimes it is a physiological problem and nothing at all to do with a disease.”

However those problems more difficult to diagnose require extensive testing. “We’ll try to get an answer as soon as possible. If we can identify a problem early enough, we can alert the grower to sanitation measures or other control measures, and we can also prevent the possible spread of a problem to a neighbouring greenhouse.”

Early detection and a quick response are key disease control measures. Dr. Cerkauskas repeats a favourite saying of his karate sensei, who often advises his students that “it is easier to blow out a match than to try to blow out a forest fire.”