“I find it fascinating how many solid arguments could be made that would speak strongly in favour of the safe use of pesticides, once we learn about the chemistry, the biology, and the history of chemical pest control. It also fascinates me that we hear so few of these arguments in public discourse.” 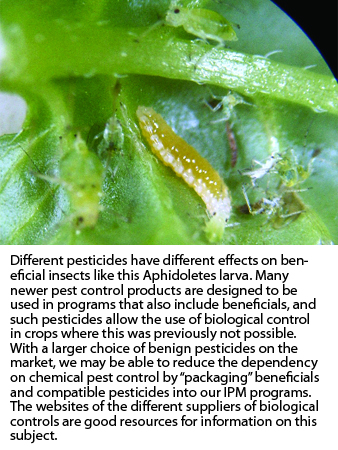 Two years ago, the Ontario College of Family Physicians published a review of research on the effects of pesticides on humans. The study makes very broad claims about the potential risks associated with pesticides, and it aims to highlight a link between pesticide exposure and possible serious illnesses and disease.

I don’t intend to wade into the details of the discussion about benefits and potential risks resulting from agricultural use of pesticides. Today, however, it is a fact that as a farmer, I have to be able to defend my pesticide practices on a very broad platform. As an applicator, I ought to be able to demonstrate that my practices are safe for me, for my colleagues, for the general public, and for the environment. I might even have to defend the very fact that I use pesticides, because the non-farming public is becoming increasingly sensitive to this issue.

Above all, my arguments have to be credible and founded in science. The notion that, “I have sprayed pesticides for 25 years and nothing happened to me” does not cut it when I want to convince someone about the fact that I know what I am doing when I am handling these substances.

Few statements could be more damaging to my credibility than claiming that a pesticide is harmless, merely because the lethal dose is more than that of cooking salt. In the age of the Internet and massive ecological problems, many people are educated too well to be satisfied with such simplicities.

My co-workers in the greenhouse would potentially be the most vulnerable to pesticide exposure. To them I owe the proof that they can trust me for not putting them into harm’s way. I consider it my duty to develop such trust and to establish my credibility with my colleagues at work, rather than have them worry whether I am doing anything questionable or potentially risky.

If we want to convince our neighbours near the farm, if we want to improve the image that our pesticide practices have shaped in the public mind, or if we want to make sure that our co-workers work without fear, we have to educate ourselves about the potential risks associated with pesticides if applied incorrectly. We become more credible if we demonstrate knowledge and expertise about the potential toxic effects of each substance, and about means of exposure, or about the different ways that associated toxins can harm us. We have to become really good at this. Then we can convince others.

I find it fascinating how many solid arguments could be made that would speak strongly in favour of the safe use of pesticides, once we learn about the chemistry, the biology, and the history of chemical pest control. It also fascinates me that we hear so few of these arguments in public discourse.

The first synthetic pesticides were developed in the 1940s. Based on our current knowledge, many of these substances are very problematic. However, for the farmers at the time, they were one of the most fundamental blessings of science, partially because they were a key factor in obtaining the yields that make agricultural products as affordable as they are today, but also because they replaced pest control methods from long ago that were frankly horrific – at least from today’s point of view.

If you have a chance, you should read the pest control section in old books intended for professional farmers, especially those published before the Second World War. Back then, the more harmless insecticides were based on tobacco extract, concentrated nicotine, or wood alcohol. The heavier concoctions included carbolineum (a mixture of phenolic pitch oil and coal tar) mixed with old motor oil, arsenic salts, mercury salts, and cadmium salts. Carbon disulfide was described as effective, was widely used, but was somewhat expensive. Not a word about toxicity. I am not surprised that “clean” and “degradable” synthetic pesticides were a very welcome revolution in those days. I really don’t like the idea of arsenic in my apple pie either.

Concern about pesticides may lead many non-farmers to view organic production as a viable, sustainable alternative to conventional farming. I fully support the concept of organic farming. I worked on a bio-dynamic farm myself, so I have great respect for any farmer that steps onto that rocky road. But I don’t think that we do any service to sustainable agriculture by focusing exclusively on organic methods.

In older literature from the pre-synthetic pesticide days, there is no mention of organic farming. It is a public misconception that organic farming has merely fallen out of vogue, in favour of using synthetic pesticides, for financial gain. In fact, organic farming is a very recent concept, largely promoted by Rudolf Steiner and the anthroposophic movement in the first half of the last century. Because it is so new, we do not have any valid empiric basis to predict whether the farming community and our society could survive on organic farming alone.

Organic farmers are already in tough competition for a very small market, and for this simple reason, more organic produce on the market would not necessarily help their cause.

The consuming public, however, is not exposed to these details. And in the end, it is farmers who have to find credible ways to circulate our arguments for the continued, responsible use of pesticides. We must explain that pesticide technology has evolved over the years, and that not all pesticides are “bad.” We must convince the public that we know what we are doing and that what we are doing is good. If we don’t do it, nobody else will do it for us. Educating ourselves to carry these arguments is a good start.

Pesticide labels are important documents, and we have to read and follow them. But there is nothing that keeps us from using additional sources of information. There is nothing wrong with learning as much as we can about “the stuff” that we use.

A good resource for unbiased pesticide toxicology information is the “Extension Toxicology Network” or EXTOXNET, a website and database that is maintained by five American universities. On this website you find very detailed and objective pesticide information profiles (PIPs) for many of the products commonly used in Canada. Try to read a few of them. These PIPs are not created to scare people, but to inform them. The information in these sheets has helped me quite a few times to disperse unfounded fears about some of our farm chemicals.

Finally, the risk to human health from pesticides is a function of two things, the toxicity (either acute or chronic) and the amount of exposure (the dose). Eliminate or reduce either of these factors and the risk decreases correspondingly. Toxicity can be reduced by increasing your knowledge about the pesticides you use, and choosing the least toxic products that will still get the job done. Exposure is a measurement of how much and how frequently you have contact with a pesticide. It can be reduced by using fewer pesticides through good IPM strategies and by carefully following label instructions, wearing protective clothing when spraying, and observing re-entry restrictions afterwards.

Albert Grimm is the head grower at Jeffery’s Greenhouses in St. Catharines, Ontario.