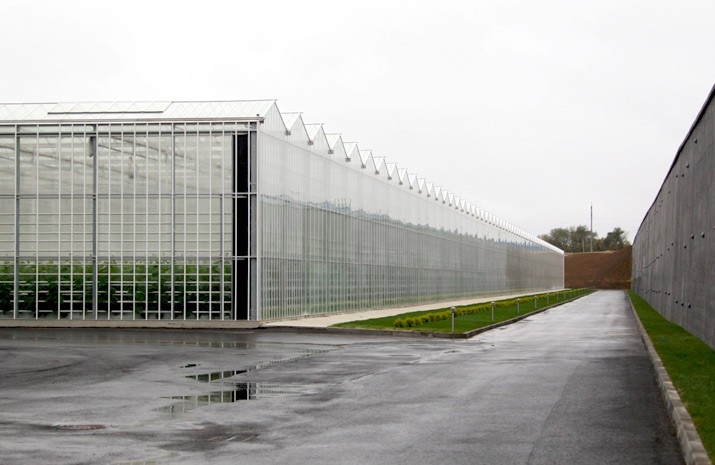 A new 30 million Euro greenhouse project in western Ukraine will be expanded to 40 hectares in coming years.

It is owned by billionaire Dmytro Firtash, who controls much of Ukraine’s fertilizer supplies and natural gas importing. Gas costs have exceeded $400 US per 1,000 m3 in recent years, causing many glass greenhouses to close and remaining ones to cut margins or find alternative energy sources.

The largest in Western Ukraine greenhouse complex DF Agro was inaugurated today in Synkiv in the presence of Nikolay Azarov, Prime-Minister of Ukraine, and Dmitry Firtash investing in the greenhouse construction. At the moment, the Synkiv (Mr. Firtash’s native village) facility in Ternopil region is the most advanced greenhouse in Ukraine. The ribbon-cutting ceremony was also attended by over 500 residents of Synkiv and neighboring villages, local governments’ officials, professionals participating in the complex construction and greenhouses personnel.

Speaking at the ceremony Mr. Firtash referred to the newly built greenhouse as to a major driver of the region’s economic development. “We have built one of the most advanced greenhouse enterprises in Europe. It is not simply about jobs for the local citizens, it is about tax revenues for the region. It is about funds to develop social infrastructure, to improve quality of life. One facility of this kind means a powerful boost for the whole region’s development,” said Mr. Firtash.

He sincerely thanked all those who contributed into the greenhouses construction sharing a feeling of pride for being able to involve top-notch professionals, including ones from the Netherlands, Israel and Turkey, in making this project a reality. “Obviously, it’s very gratifying that best experts from different countries of the world came to this Ukrainian village to do a perfect job, and I am delighted to see how perfectly they coped with their missions.”

Prime-Minister Azarov commented that putting up one of Ukraine’s best greenhouse facilities is an example of the country’s growing increasingly more self-sufficient. “This state-of-the-art complex is a persuasive manifestation of our growing stronger and becoming capable of providing itself with all necessary resources. This is a genuine contribution into our independence. This is a contribution into the stability of our currency,” stressed Mr. Azarov.

“I am excited to see your land transforming so dramatically. I have seen a modern village and a clear message of our country’s building a modern state. It is a perfect example of business-to-government cooperation,” said the Prime-Minister.

DF Agro greenhouse complex construction was launched in November 2011. At this time, the first section with the total area of 10 hectares has been commissioned while the remaining 30 hectares will be put into operation next year.

DF Agro will have a production capacity of 4 thousand tons of tomatoes, 1.55 thousand tons of peppers and 350 tons of cucumbers. The level of technological support in the facility is really hard to match in Ukraine: the greenhouses are equipped with 24-hour lighting and a sprinkling watering system. Fertilizers and mineral-nourishing solutions are fed under the control of a computerized system which, on top of that, is responsible for maintaining the temperature regime. By and large, the Dutch and Israeli specialists perform comprehensive remote control of all stages of plants growing and picking.
Growing vegetables is a traditional agricultural business endeavor in the village of Synkiv.