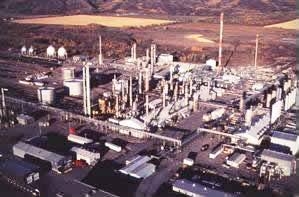 The McMahon natural gas processing plant in Taylor, BC.

Canadian natural gas prices could be poised for a recovery “after hitting 10-year lows on the back of slashed drilling programs and the prospect of a hot summer,” the Calgary Herald reported on May 1st. “The number of drilling rigs targeting natural gas dropped substantially on both sides of the border during the first quarter [of 2012], with unseasonable heat last week and a cold front this week bumping up demand in many regions of the United States.”

Meanwhile, natural gas prices in the US increased by nearly five per cent on Monday April 30 due to recent supply cuts by gas producers. At the end of the day, natural gas futures has risen 9.9 cents to $2.285 USD per 1000 cubic feet, the highest price since March 21.

The news website ‘ninemsn’ reports that US supplies of gas “have ballooned to nearly 60 per cent above the five-year average, after a wave of new shale drilling delivered more natural gas to the market than people were able to use…Analyst Stephen Schork noted, however, that supplies continue to grow this spring, and that could still push storage facilities to full capacity later this year.”