Features Crops New Varieties
Gardeners Weigh In On Their Favourites

Visitors at the University of Guelph’s renowned Ornamental Trials in Vineland, Royal Botanical Gardens, Milton and Guelph were able to vote for the varieties that performed best in 2016. 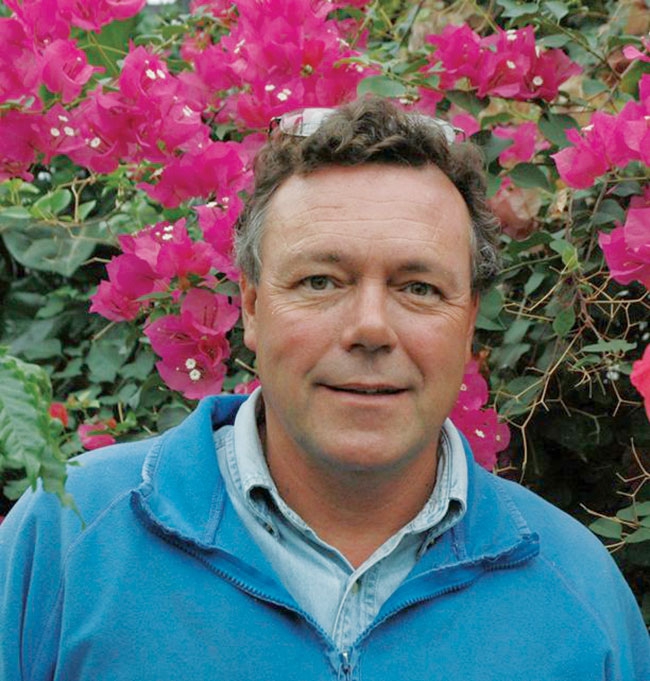 Rodger Tschanz, of the University of Guelph.

February 2017 – In a similar article last year, a number of visitors’ favourites from an open house at the container trials at the Vineland Research and Innovation Centre (Vineland) were presented.

This year the content has been expanded to include voting responses from visitors at the four different university of Guelph trial sites: Guelph, Milton, Royal Botanical Gardens (Hendrie Park) and at Vineland. This expansion allows the article to include both ground bed and container responses.

The container data was collected from Guelph and Vineland while the ground bed data is compiled from responses at Milton, Guelph and the RBG. The production of all plants for the four trial locations primarily took place at the University of Guelph’s research greenhouses.

No PGRs were used during the greenhouse production phase of the bedding plant crop. Growth control on the benches was achieved by physically trimming the plants once on the greenhouse benches in late April.

VEGETATIVE AND SEED PROPAGATED MATERIAL
The trial plant material was composed of both vegetative and seed propagated material and was planted outdoors over a two-week period extending from the end of May to the beginning of June in 2016.

Table 1: This table lists the top 10 container grown cultivar selections as determined by visitor votes during the period of July 27 through Aug. 20, 2016. It presents a compilation of votes from the Vineland and Guelph trial sites. The measurements were taken from the Vineland trial on Sept. 12. Unless otherwise indicated, each container was planted with three plants (11 cm pot size) on May 26 or 27, 2016. Height equals the maximum height of container plant above soil level in pot; spread equals maximum spread of the three combined plants in container; drop equals the measurement of plant material draping over the rim of the pot measuring from the pot rim downward.

SOME OF THE TOP CONTAINER PERFORMERS
Lantana ‘Lucky Red’ – This lantana cultivar displayed vigorous growth, season-long bloom and pollinator attractiveness in the trials. It was suitable for both container and landscape plantings. After 3.5 months of growth in the Vineland trials, three plants in 41 cm containers reached a height of 47 cm and a spread of 121 cm. After 3.5 months growing in the trial beds at Guelph, the landscape spread was 110 cm.

Verbena ‘Endurascape Pink Bicolor’ – The summer of 2016 was a great year to observe summer heat performance of cool-loving annuals such as verbena. This particular cultivar had noticeably more bloom throughout the heat of the summer than the other verbena entries. It is a vigorous grower in both containers and ground beds.

Impatiens ‘SunPatiens Compact Tropical Rose’ – The variegated foliage of this cultivar provides a favourable backdrop to its large rosy coloured blooms.  Visitors to the trials also liked the way this plant was showy in the evening under lower light conditions. ‘Compact Tropical Rose’ had a noticeably compact growth habit compared to the spreading versions of the SunPatiens series.

Cyperus ‘Prince Tut’ – In the U of G trials this plant was a full 50 cms shorter than ‘King Tut.’ Everything else was similar between the two cultivars – same plant form and shoot density. The reduced height of this plant was very appealing in a container.

Calibrachoa ‘Superbells Pomegranate Punch’ – There were 34 different calibrachoa cultivars in the 2016 container trials. Many were eye-catching and prolific bloomers. This was one of them with a deep shade of red and blackish floral centre.

Petunia ‘Opera Supreme Raspberry Ice Imp’ – This seed-propagated petunia is similar to the Supertunia Vista series in vigour. The medium-sized blooms (5.7 cm diameter) were found to have exceptional rain tolerance. This cultivar is a good choice for both containers and the landscape where each plant exceeded one metre in spread and 43 cm in height.

Petunia ‘Supertunia Picasso in Purple’ (PIP) – During the greenhouse phase of the trial, this cultivar was observed to be less aggressive on the benches than ‘Pretty Much Picasso’ (PMP). Like PMP, this entry has flower petals edged with light green. When grown side by side in the outdoor container trial, the vibrant bloom colour and densely packed blooms of ‘Picasso in Purple’ drew the eye away from ‘Pretty Much Picasso.’ The average bloom size of PIP measured 5.3 cm compared to 4.7 cm for PMP.

Verbena ‘Magelana Red Star’ – This cultivar of verbena had acceptable heat tolerance and all-season bloom in both containers and ground beds. Its unique bright red and white star pattern on the flower attracted voters.

Table 2: Top 10 ground bed grown cultivar selections as determined by visitor votes during the week of August 15-20, 2016. This table presents a compilation of votes from the Milton, Guelph and RBG University trial sites. The hot and dry conditions of 2016 were ideal for growing heat-lovers such as zinnias and peppers so it isn’t surprising that a number of cultivars of these species were exceptional and chosen as open house favourites!

Rodger Tschanz, of the University of Guelph.

SOME OF THE TOP GROUND BED CULTIVARS
Capsicum ‘Ornamental Pepper AAS 16OS09’ – This All-America Selections (AAS) entry in the 2016 trial was a dark-purple coloured foliage ornamental pepper with a compact, bushy growth habit. The foliage colour and fruit shape is very similar to that of ‘Black Pearl’ but is half the height. Although the seed for this entry isn’t commercially available for this season we hope it will be soon.

Zinnia ‘Profusion Red’ – This zinnia was entered in the 2016 AAS trial where it was judged to be a National AAS winner for 2017. Its unique true red bloom colour and continuous bloom habit made it popular with trial garden visitors as well.

Solenostemon ‘French Quarter’ – This coleus has what might be called traditional coloration and patterning; green leaf with shades of purple and rose coloring the leaf centre. This was a vigorous growing plant, achieving large dimension in the sun and shade, in containers and in the ground. The container specimen grown in Vineland had a height in September of 100 cm.

In addition to attractive foliage and plant size this cultivar was not observed to have bloomed at any of the trial locations; from a maintenance point of view, not needing to physically remove the flowers is an attractive feature.

Capsicum ‘Black Pearl’ – This was an AAS winner for 2006 but continues to catch the attention of visitors to the trial garden.

Rodger Tschanz is a greenhouse technician and sessional lecturer at the University of Guelph. In 2001, he was asked by the Department of Plant Agriculture to create and manage the university’s Ornamental Trial Garden program.
The trial garden locations have expanded over the years to currently include ground bed trials in Guelph, Milton and the Royal Botanical Gardens as well as container trials in Guelph and at the Vineland Research and Innovation Centre.
At the Guelph site, Tschanz is a judge for the annual and perennial entries of the All-America Selections organization.