Features Crops Flowers
Reviewing the poinsettia season, was this the BEST YEAR EVER? 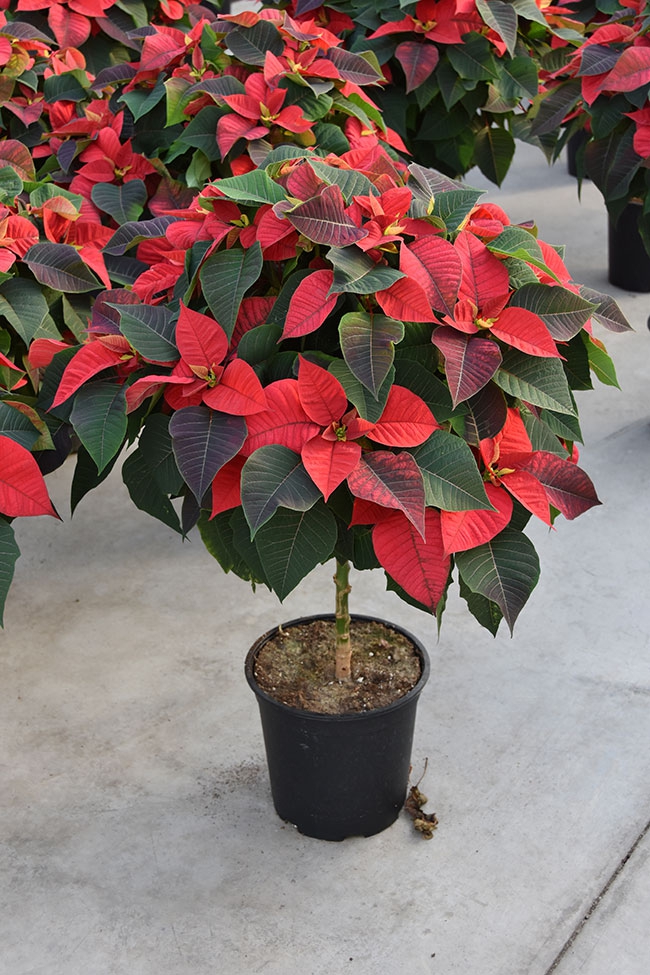 Poinsettia trees that are consumer friendly.

February 2017 – Ontario growers who thought 2015 was a good year for the crop had a very pleasant surprise last fall, thanks to perfect weather conditions, excellent cuttings and minimal pest pressures. Retailers, too, were in a most festive mood.

I thought 2015 was the best year ever for poinsettia production, sales and consumer satisfaction. Well poinsettia production in 2016 was even better than 2015, making it the best year for production. Sales were better for the growers in general, but not great for all retailers depending on the product sizes, packaging, displays and sales timing. And consumer satisfaction depended on which product they ended up with.

Sales and marketing:
Last year began with slow sales compared to other years, but finished strong. It featured great weather for sales and shipping, with no snow or frozen loads or blizzards to keep shoppers away.

The slow start was primarily for outlets that race to put poinsettias on their shelves before Remembrance Day, thinking that the red poinsettia is the same as a red poppy. Poinsettias are for Christmas and any push to sell them early is a recipe for sales shrinkage.

Early products that don’t move off the shelves start to look bad. By the time the consumer is ready to buy, all they find are nearly dead poinsettias and/or plants that are far from fresh. “Timing is everything,” and we do not need snow to sell poinsettias. Some 70 per cent of poinsettias are sold in regions that never get snow!

Growers and buyers establish their programs six to 12 months in advance – last minute or spot buying is rare. Buyers for large chains have to have consistent suppliers for more than one product. That is why spot buying is their last choice. A buyer managing 100-plus stores does not want to deal with too many suppliers. This is a positive because programs will prevent price-cutting – growers and buyers will know what they are getting into right at the start of growing the crop.

A new realization from growers that is long overdue is the cost of shipping, which has risen over the last few years by 30 per cent even with comparatively low fuel costs. This has triggered greater co-operation among growers and buyers to focus on local markets where possible. Calculating total costs should include every aspect of growing and selling the crop, and transportation is a major expense.

The demand for large pot sizes and plants has been less than normal. All sizes were completely sold out in Ontario except the 8” pot size due to:

The new sizes for successful production, while giving the consumer a better chance to succeed in having a longer lasting plant, includes one plant/pot for 2”, 5” and 7” containers, and three plants/pot for 10” and 12” containers.

I know it is hard to change growing the old traditional sizes, but by working with your buyer and advertising the benefits, you will be ahead of the curve in providing a much better product.

Different poinsettia varieties require different production schedules for different sizes. Following these sizes is a good thing because that’s when the plants are used at their maximum potential and at the most economical cost. What is more important is that it will give the consumer a better chance of keeping the plants much longer.

Production
Most stock producers are doing a better job every year in providing good quality cuttings that are generally pest-free. The whitefly battle was quiet this past poinsettia season for growers using biologicals or chemicals. As well, the hot, dry summer helped limit the number of field whiteflies. Even tomato fields in the province had far fewer whiteflies than normal.

However this same weather also led to higher populations of spider mites and Lewis mites, especially in greenhouses largely relying on biological control. Normally, mites are not a serious problem in poinsettia production and predators that control whiteflies do not work on spider mites.

All in all, it was a much better year for pest management.

The most effective control seems to be a combination of using biologicals at the beginning and chemicals at the finish. But in the quest for chemical-free greenhouses, biological producers have to come up with beneficial predators that can clean the last of the whiteflies. Eretmocerus mundus is an effective predator but it is no longer available nor easy to produce. The good news is that I know of one biological company that is going to produce it but its availability is going to be to the growers who are going to use their total biological program for the other pests.

Last season was the best year ever for rooting poinsettia cuttings, even though it was not the best weather. Good cuttings arrived on time and came from much healthier stock plants.

The most important improvement was the much-improved skills of the propagators. They have developed the best procedures to have healthy, strongly rooted cuttings especially at the rooting stations.

In addition to all of this, the excellent fall weather helped in having the best poinsettia crop ever. The crop ended up:

And if the plants were ordered for the traditional sales period, there was very little shrinkage at retail.

Varieties
Few new varieties are going to be in production this year. Try the new varieties on a small scale and then decide whether to include them in your program. Remember to drop your least desirable varieties if you add new ones.

Two years ago the Ontario poinsettia trials were moved from the Vineland Research and Innovation Centre to nearby Linwell Gardens. The move was a great improvement for growing and flexibility.

This year the trials are going to take place at Jeffery’s Greenhouses in St. Catharines. This will feature variety trials designed to answer many of the “what if” questions in poinsettia production. An open house will be held to share the information with growers and buyers. It’s time to take poinsettia production, marketing and consumer success to the next level. Stay tuned for more information.

In this feature’s photos we present a few of the varieties that look promising. Some are new and others were introduced a few years ago but are not widely grown. Varieties that are good for 5” pots are not necessarily good for 10” production, or at least you would need to modify the production schedule drastically to use the same variety for every size. Read the variety specs and try it in the new sizes.

Red poinsettias are at least 93 per cent of the total, followed by white (four per cent) and pink (two per cent) pink. The rest are in the “miscellaneous” category.

This fall’s trials will include shelf life longevity, treatments of different growth regulators and different production applications. The open house will be held as close to Nov. 20th as possible, allowing growers to see the varieties before they are all mature and starting to look the same.

Regardless of which variety you grow, remember to ensure the planting media is not filled flush with the pot rim. This will give the stores and homeowners a reservoir to be able to water the plants effectively.

Two seasons ago a study group of growers and educators began meeting once a month (starting in June) to discuss production issues. They mainly concentrated on whitefly control this past season. The study group met in different greenhouse operations and had a discussion and tour of the host grower’s crop. Next season we are going to do the same thing and try to include more topics than just whitefly control.

Poinsettia trees that are consumer friendly.

PROBLEMS IN 2016
Insects: Whitefly is the major pest with poinsettias. However with the greater use of targeted biological control other insects are popping up, including Echinothrips and spider mites. And for the first time we have seen mealy bug that came with the cuttings on a couple of cultivars.

Diseases: Diseases were not a big issue in 2016, thanks to the good weather and great cultivars. For growers who paid strict attention to good cultural practices, there were no problems at all – even without the use of fungicides, and biological  or chemical controls.

Physiological disorders: There were problems with heat delay in a couple of spots because of malfunctioning heat valves. And in another example, a light bulb over a sidewalk kept a 50-foot circle of plants green for a time, but the problem was corrected and the plants were shipped just before Christmas.

Melhem Sawaya of Focus Greenhouse Management is a consultant and research coordinator to the horticultural industry – mel@focusgreenhousemanagement.com.