It is important to know the biology of the natural enemy in use. 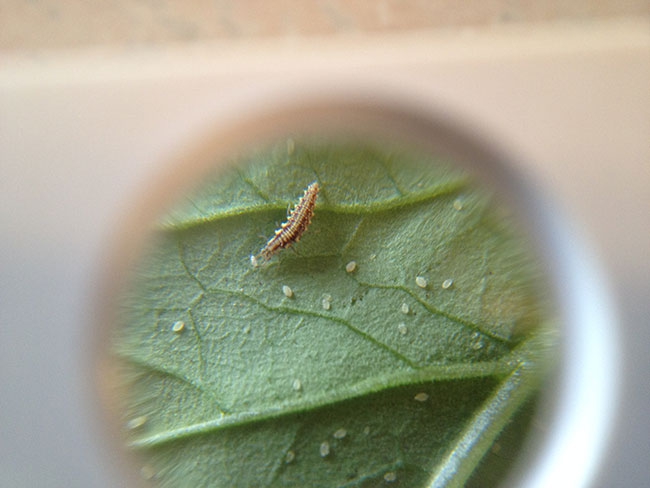 February 2017 – During early season, greenhouse crops are often considered as simple ecosystems with low biodiversity. Particularly, crops in modern greenhouses appear sterile compared to outdoor crops and this is because plants are grown on hydroponic systems in a closed environment.

However, infestations by several small pest species cannot be avoided and the release of natural enemies against these pests adds to the diversity. Seemingly “clean” greenhouse crops often accommodate complex artificial communities of multiple pests and natural enemies. One reason for the increased diversity might be the introduction of exotic species – more species than ever before develop into pests and release off a variety of natural enemies.

The release of natural enemies, especially generalist predators (except some predatory mites) early in the season is not considered important conventionally. Growers prefer to release specialists instead as a preventive measure to manage the insect pest problems depending on the crop and pest threat.

It is important to know the biology of the natural enemy in use. The adult life of specialists is shorter than that of predators or generalists because they can feed on a variety of pests, pollen and plant material. However, parasitoids or specialists do not have this ability and cannot survive without a specific food; mites can survive a bit longer then parasitoids but without egg production.

Generalists may locally drive pests to extinction without necessarily leading to a decline in predator numbers. Thereafter, generalists may adopt a lying-in-wait strategy, maintaining their numbers on non-pest prey and preventing re-invasion by the pests.

For example, Dicyphus and Swirskii are able to control both whiteflies and thrips effectively on greenhouse tomato and cucumber. Direct observation suggests that these predators mediate apparent competition between the two pests; whitefly control was substantially better in the presence of thrips. Moreover, spider mites were controlled better by the presence of thrips through apparent competition. Although neither Dicyphus or Swirskii is an effective predator of spider mites, (especially Swirskii because it is strongly hindered by the webbing), they can prevent the formation of new colonies of spider mites by threatening, disturbing and predation. As a result, generalist predators can even have significant effects on prey species they cannot suppress successfully on their own.

For instance, predators Macrolophus pygmagus and Nesidiocoris tenuis and the parasitoid Eretmocerus mundus have shown their efficacy at controlling B. tabaci populations when used in combination as biological control agents, leading towards conservation of biological control strategies. In another example, coccinellids and carabids both feed on aphids within a crop (additive), but dislodgement of aphids by the coccinellids in the canopy also causes them to fall to the ground where they are more vulnerable to the carabids (synergistic).

In the majority of studies, individual species of generalist predators are shown to reduce pest density signiﬁcantly when used in proper predator/prey combination (pests reduced signiﬁcantly in 70 per cent of cases) or inundative releases of predators (pests reduced signiﬁcantly in 82 per cent of cases). It has been demonstrated through scientific studies that predators have a signiﬁcant beneﬁcial effect in reducing crop damage or increasing yield in 20 out of 21 cases (95 per cent). Inundative releases of predatory mites against spider mites and thrips have been observed to be successful not only on greenhouse crops but on citrus, grapevines, hops and in lily propagation as well.

Another approach of combining arthropod natural enemies with entomopathogenic fungi in the light of new methodologies and technologies such as conservation biological control, greenhouse climate management, and formulation and delivery offers new opportunities to optimize and further develop biological pest control.

Scientific results suggest that a combination of the generalist predator Dicyphus Hesperus and the entomopathogenic fungi Paecilomyces fumosotoseus has a potential to cause mortality of whiteflies despite evidence of minimal interference.

Similarly, and using the example of potato plants, increased diversity of natural enemies, including a predatory beetle and predatory bug above ground and entomopathogenic nematodes and entomopathogenic B. bassiana below ground, provides a significant reduction in the Colorado Potato beetle population while also presenting an increase in plant biomass indirectly.

Furthermore, a new study has shown that compatibility and overall increased effects are observed when both emtomopathogenic fungi and an arthropod predator are applied.

Let’s start another era with new approach of IPM.

Dr. Abida Nasreen is the director of research and development with GrowLiv Ltd., www.growliv.com.