Well known for their commitment  to innovation, Alberta’s Doef’s Greenhouses installed two acres of lights last year, primarily for the winter cucumber crop. The results have been encouraging. 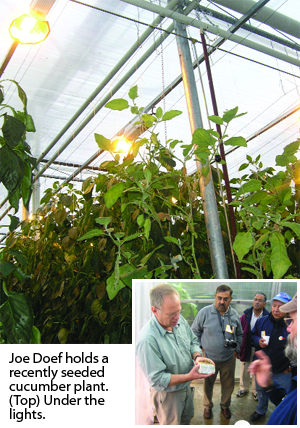 It was a successful debut for Alberta’s first winter cucumber crop grown under lights.

Doef’s Greenhouses (www.doefsgreenhouses.com), a six-acre facility near Lacombe, grows cucumbers, peppers, tomatoes and hot peppers. Owners Joe and Helen Doef are joined by sons Eric and Paul and son-in-law Phil Visscher in managing the
family business. Joe was named Grower Of The Year in 2004 by the Alberta Greenhouse Growers Association.

Well known for their commitment  to innovation, the family installed two acres of lights last year, primarily for the winter cucumber crop.

In a recent follow-up call, Joe’s eldest son, Eric, explained that yields and quality were both good, and due to the wintry outdoor conditions, there were very few pest pressures.

He added that the crop was labour-intensive, as they were picking six days a week. “We couldn’t afford to let them get too big because they were growing so quickly,” he said of conditions under the lights. “It meant a little more work to stay on top of things, but the rewards far outweighed the challenges.”

Another two acres of lights are being installed, allowing for four acres of winter cucumber production.

The business began at this location in 1976 with 18,000 square feet of wooden structures. The Doefs were forced to rebuild in 1980 after the greenhouse collapsed under a heavy snow load. They started anew with their first gutter-connected greenhouse – at the time considered a state-of-the-art facility – of 24,000 square feet. Additions continued over the next few years.

In 1997, the first two-acre phase of the current facility was constructed, followed by another two acres in 2000. In 2001, the original structure was torn down to make way for the third phase of expansion, an additional two acres.

Joe and Helen helped found Pik-N-Pak Produce Limited in 1993, which wholesales greenhouse vegetables for four member-growers in their region.

The farm has recycled its water for about a decade. It’s a win-win situation, he emphasized. “You save on fertilizer and you save on water.”

They use an integrated pest management program in dealing with any major pests. “With biological controls,” Joe said, “you have to apply them early, and you have to do a regular scouting of the crop.”

Eric says the energy curtains installed last year have also proven quite effective. “They’re saving us about 30 per cent on energy,” he said.

Joe was asked what advice he would give to industry newcomers. His answer, simply put: don’t be shy. “There is a lot of knowledge out there (in the industry),” said the longtime industry mentor. “Don’t try to do everything yourself. Talk to other growers.”

Having crop scouts and working with a consultant are wise investments. “Having another set of eyes looking over your crop is a good idea.”

Eric adds that a lot of good information can also be gained from attending national and international trade shows, and by reading industry trade publications such as Greenhouse Canada.