The evaluators of the trial were especially interested in comparing the time to bloom or marketable stage, the need for growth regulation, free branching (need to pinch), and disease and nutrient issues when grown relatively cold after establishment. 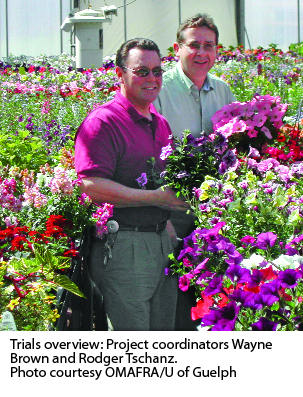 A new, applied research initiative in support of the ornamental greenhouse industry was launched in the spring of 2007 in response to requests by Ontario growers and breeders/distributors. With financial support from the Canadian Ornamental Plant Foundation and the Canadian Greenhouse Conference, Wayne Brown, Ontario Ministry of Agriculture, Food and Rural Affairs, and Rodger Tschanz, Department of Plant Agriculture, University of Guelph, worked together to evaluate the greenhouse production performance of 70-plus cultivars of vegetatively propagated bedding plants in the research greenhouses on the Vineland campus.

Proven Winners, Dummen, Ball FloraPlant and Ball Seed/Sakata participated in the trial. The evaluators of the trial were especially interested in comparing the time to bloom or marketable stage, the need for growth regulation, free branching (need to pinch), and disease and nutrient issues when grown relatively cold after establishment. In general, the Ball FloraPlant liners had not been pinched at the rooting station, while those from Proven Winners had been. Some of the series from Dummen were pinched by the rooting station and others were not (see tables, pages 14,  18 and 37).

All plants were received as rooted liners and planted on March 5 into 4.5” pots in Sunshine #1
potting mix. On March 16, all petunias, calitunias, coleus and iresine were pinched. During the three-week period following transplanting, the trial material was grown at a day/night temperature of 20ºC and irrigated by hand using a watering wand and breaker. During this period the plants were fertilized with 20-8-20 at 150 ppm N.

On March 27,  the plants were spaced onto a trough watering system where they remained until the shipping stage of development. While on the troughs, all plants were fertilized with 100 ppm N of 15-0-15, three out of every four waterings; the plants were watered with clear water on the fourth watering. After March 27, all the plants  were grown at one day/night greenhouse temperature setting of 16ºC.

No supplementary or photoperiodic lighting was used in this trial.

All plants received a wetting agent application (Aquagro 2000 at 15mL/1000L) on May 1 to improve the uniformity of irrigation between pots. Evaluations took place on March 27, Apr. 18, Apr. 27 and May 1. No chemical growth retardants were applied during the trial period. Any pinching used for size management is indicated in the table. Two replicates, each consisting of six plants, were evaluated.

An open house was held on May 4th attended by numerous growers and industry representatives.