By finding the right balance of sugars created and sugars consumed, you can produce a more healthy and resilient crop while maximizing the plant’s use of available light. 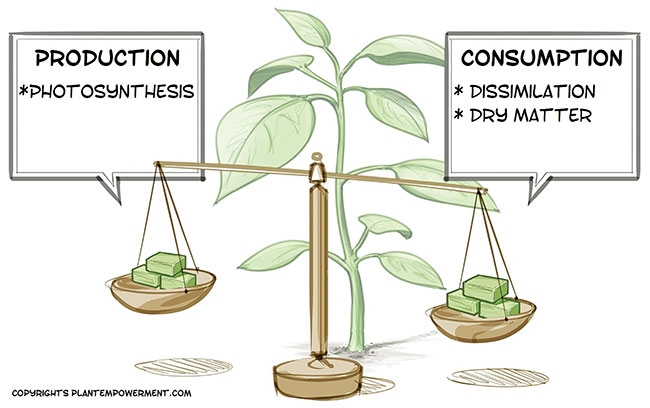 FIGURE 1. Various processes in the plant produce and consume assimilates, creating a balance.

Growing By Plant Empowerment (GPE) is a global follow-up to a new Dutch growing method called Het Nieuwe Telen (HNT, also known as Next Generation Growing). It starts with the natural behaviour of plants, as they are capable of coping with very different circumstances and climate conditions. The plants keep themselves alive by managing three balances: energy, water and assimilates. Part of a series on GPE, this article will focus on balancing the production and consumption of assimilates and how this knowledge can be used to produce higher crop yield and quality.

Starting with photosynthesis
Photosynthesis is the starting point for optimizing plant growth. In the process of photosynthesis, carbon dioxide (CO2) and water (H2O) are transformed into sugars or assimilates, with the help of energy from sunlight. These sugars can be used as building blocks for plant tissue production and to make new cells, for instance. The biochemical processes responsible for the production of new cells also need energy, which is indirectly supplied by sugars as well. So assimilates have two roles: building material and fuel for plant growth. The plant will always balance its consumption and production of assimilates, as shown in Figure 1. If there is an assimilate shortage, the plant has to cut down on consumption, at the cost of development or quality. Surpluses, however, mean inefficient utilization of available assimilates, which is also undesirable.

Source–Sink relations
Green plants contain a pigment called chlorophyll. Along with other secondary pigments, chlorophyll absorbs part of the solar spectrum that we call photosynthetically active radiation (PAR). This is light in the wavelength range of 400 to 700 nanometers – essentially the colour spectrum. Leaves that produce more assimilates than they consume are known as “sources” of the plant. All other parts of the plant which consume more assimilates than they produce are called “sinks.” The main sinks are the fruits or flower buds.  Young leaves belong in the “sinks” category because they consume more assimilates than they can produce. But mature leaves, which don’t receive enough light because they are overgrown by younger leaves, also become sinks again when their assimilates consumption exceeds their production. The roots are typically the weakest sink of the plant; they are first to react to a shortage of assimilates (dying roots) or a surplus (quickly expanding roots). See also the section on root growth.

We need to take into account the size and activity of the sources and sinks. For the production of assimilates, PAR light must first be absorbed by the green leaves. The level of assimilate production then not only depends on the light-intercepting area of the leaves (source size), but also on the amount of light that penetrates through the crop canopy.

In general, when the total leaf area of the plant is about three times as big as its footprint on the greenhouse floor, all light intercepted by the plant is used for photosynthesis. In this case, the so-called LAI is 3 (Leaf Area Index, measured in m2 leaf area per m2 greenhouse area). When the light penetrates more deeply into the crop canopy, the leaves keep their chlorophyll content at higher levels, which results in a higher light use efficiency. This is further improved with an open plant architecture combined with the use of diffuse light.

Optimizing climate conditions
When chlorophyll intercepts PAR light, its energy is used to form sugars out of CO2 and water molecules. Oxygen is then released out through the stomata just as CO2 is taken in. To keep the stomata open, humidity should be high enough under high radiation conditions. Findings show that these three climate conditions – PAR light intensity, CO2 and humidity – all influence the production of assimilates, and should always be in balance with each other because each of them can become a restricting factor in the process of assimilate production.

On the consumption side of the assimilates balance in Figure 2, temperature determines the crop’s growth rate, and therefore, the crop’s sink activity. A specific consumption rate of assimilates can be realised with a high sink activity (temperature) and a low sink size, which depends on the plant load, a term defined as flowers/m2 or fruits/m2 on the crop. In contrast, when the plant load is high, the optimum temperature will be lower.

The first situation is the better choice, because now the ventilation rate can be lower when radiation is high. This results in a higher level of CO2 and better humidity, which in turn helps to keep stomata open. This also means that a low plant load allows for a climate strategy that can help improve light use efficiency. Of course, the plant load should always align with the average available light sum (daily light integral) year round as well.

Figure 3 shows that, depending on the RTR, the plant’s structure can develop towards a leafy, heavy plant with thick stems, or a more thin plant with shorter leaves and longer internodes. There are many different RTR strategies that can be followed. Keeping a well-chosen and consistent RTR rewards the grower with a strong, healthy and resilient crop.

FIGURE 1. Various processes in the plant produce and consume assimilates, creating a balance.

Figure 3. Managing the daily balance using a constant RTR can result in a strong, healthy and resilient crop.

Figure 4. The LetsGrow climate monitor shows whether different aspects of the greenhouse climate are balanced and on track.

Plant Balance and Root Growth
Avoiding surpluses and deficits on either side of the assimilates balance also results in more consistent root growth, which helps to avoid a lot of problems like tip burn, blossom end rot, inner rot, mycosphaerella, etc. Because the roots are the weakest sinks, they are first to react to a shortage of assimilates (dying roots) or a surplus (quickly expanding roots), which can result in water stress or extreme root pressure, causing the problems mentioned. In other words, a constantly varying RTR results in irregular root growth. This is also negative for the uptake of nutrients, in particular calcium, which affects the pH and EC values in the rootzone, and the microbiological organisms that live around the roots. All this can cause weaker plants, lower light use efficiency, problems in quality, and even diseases.

Other articles in this series

Tools to monitor source–sink management
Monitoring the balances is an important part of GPE. Figure 4 shows the online climate monitor. This monitor reveals, at a glance, whether all climate factors concerning the assimilates are well-balanced or not in 5-minutes intervals. This module allows the grower to program his personal optimal strategy for temperature, humidity and CO2 in response to the actual radiation level in the greenhouse. The green bars indicate to what extent the realised climate conditions are optimal. The module provides additional graphs to analyse the minimum factor(s) (PAR, CO2, RH, irrigation) as well.

The LetsGrow plant balance monitor provides the information to assess the realised RTR versus the targeted RTR. In the scatterplot of the upper graph (Figure 5), each dot represents one day within the chosen period of time. The continuous line indicates the average realised RTR. In the lower graph the realised 24-hour temperature is compared with the desired temperature, based on the desired RTR, with margins of +/- ½ RTR.

Data Driven Growing
GPE aims to support the plant’s balances to optimize growth. As the different elements of these balances can be monitored using sensors, this approach also paves the way towards data-driven growing based on facts and digital data, which offer many advantages compared to classical methods based on human perception, practical experience, and so-called ‘green fingers’. This will be the main subject of the next article in this series.

Summary
Climate control should aim to combine all climate factors that affect the production and consumption of assimilates, in order to maintain the right balance. The highest level of light use efficiency is reached with a ventilation strategy that focuses on the production side of the assimilates balance. Typically, compared to common practice, this means a reduction of the vent position under high radiation levels, resulting in higher temperature levels. To allow for this, keeping a relatively low plant load is advantageous. A consistent RTR helps to create steady plant structure and constant root growth, resulting in a healthy and strong crop with high production levels and superb quality, along with higher use efficiency of energy, water, and nutrients, and very low demands for chemical agents.

Peter Geelen is the owner of Plantmonitoring.NL, a private training and consultancy bureau for greenhouse production. Peter is a plant physiologist and one of the authors of the book Plant Empowerment: The Basic Principles

Learn more
GPE is based on the same principles as ‘Next Generation Growing’ (NGG), developed in the Netherlands over the last 15 years. It has been shown that this approach can deliver significant advantages regarding production and quality, plant health and energy savings for many different crops. For the most part, this can be achieved without extra investments in greenhouse equipment. For more visit plantempowerment.com. Copyrights of text and illustrations: LetsGrow.com, 2019