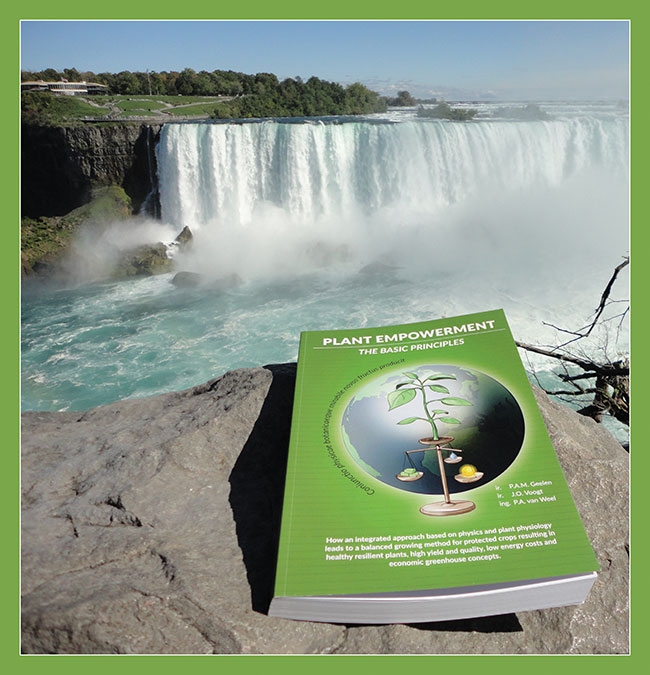 What if someone told you that plant physiology and physics could change the way you think about greenhouse climate control?

In their book Plant Empowerment: The Basic Principles, climate controls systems specialist Jan Voogt and his colleagues, former cut rose consultant Peter Geelen and former researcher at Wageningen University and Research (WUR) Peter van Weel, have pooled their knowledge and experience to show the interplay between climate conditions in the greenhouse.

Filled with detailed information on applied theory and best practices, the underlying principle is the need for balance. Crops balanced in energy, water and assimilates are healthier, less vulnerable to diseases and pests, and more likely to produce higher yields and better quality. If the point of every plant process is to maintain balance, then a grower’s job is to guard against stressors that could throw this balance off-kilter. Rather than choosing climate set points independently of each other, such as for temperature or humidity, authors say they should be changed as a system and according to crop needs, which stem from three balances.

Energy balance is about input into the plant (e.g. solar radiation, lighting, heating) and output from the plant. When there’s a high input, says Voogt, the plant’s water balance allows evaporation to cool itself slightly below room temperature. If evaporation exceeds water uptake, the stomata will close partially. Unable to cool itself sufficiently, the plant will continue to increase in temperature, needing convection by air movement to help transfer heat away from it. “For this reason, it is crucial to align watering with energy input,” explains Voogt.

At night, nutrients are needed by developing cells. They’re taken up through the roots and ‘pulled along’ by evaporation. The rate of uptake must equal that of evaporation to maintain balance. Taking a crops-first approach, ventilation rates should be set to help reach the ideal evaporation rates for the crop, rather than using generic pre-set values.

For assimilates, the authors have found a ‘sweet spot’ – a temperature-to-light ratio that balances assimilate production (i.e. sugars) with assimilate consumption (i.e. growth). Higher light intensity in the photosynthetically active radiation (PAR) range can produce more sugars, while higher temperatures encourage growth. When consumption is too high, says Voogt, fruit set and root development, but also plant health and resilience, can become a problem. “Too-low consumption relative to the production of assimilates, however, means suboptimal growth.” To maximize both, one would need to maintain a consistent ratio between average temperature and PAR light sum.

According to Voogt, when the first closed greenhouse appeared in the Netherlands about 15 years ago, researchers found that these plants behaved differently from those in open greenhouses. That triggered a collaborative research project between Hoogendoorn and WUR, the findings of which were incorporated in ‘Het Nieuwe Telen’ (HNT, which translates into ‘Next Generation Growing’ in English), an integrated approach based on different principles of crop balance. Originally based on Dutch growing practices and climate, HNT has since been refined and renamed ‘Growing by Plant Empowerment’ (GPE) for application in different crops and conditions worldwide.

Voogt also notes that the principles of Plant Empowerment should be implemented over time, not all at once. The son of a nursery grower, he understands the complexity of greenhouse production practices, comprised of “knowledge, experience and ‘green fingers’ that are often handed down from generation to generation,” as he puts it. “One should start monitoring climate conditions and plant development, and then implement improvements step-by-step,” he advises. The book contains detailed roadmaps to guide the grower through this process.