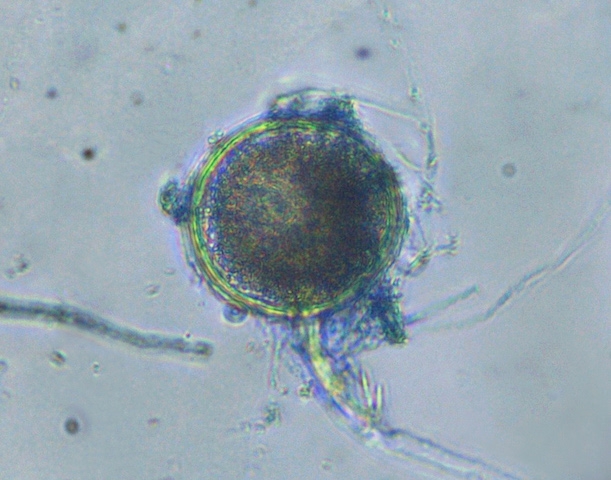 August 2, 2017 – A beneficial soil fungus could offer a bio-based approach to battling Phytophthora ramorum, a pathogen that kills oaks, other tree species and woody ornamentals.

The species is a mycoparasite, meaning it attacks and kills other fungi, including P. ramorum, a fungus-like pathogen, notes Widmer, with ARS in Fort Detrick, Maryland.

P. ramorum is best known as the culprit behind Sudden Oak Death, a disease of oak and other hardwood trees in coastal forests of California and Oregon. Nursery growers are familiar with a different manifestation of the pathogen called “Ramorum Blight.”

However, T. asperellum could offer a bio-based alternative to such soil treatments, which are many times costly, dangerous to use and harmful to beneficial soil organisms.

In petri-dish experiments and outdoor trials with potting mix, use of the biocontrol fungus reduced P. ramorum levels by 60 to 100 per cent.

A chemical fungicide achieved similar results, but only temporarily: eight weeks later, the pathogen re-emerged in the potting mix. Widmer suspects the fungicide temporarily halted the growth of the pathogen, but didn’t kill it.

The biocontrol fungus uses a specialized tactic for breaching the defences of P. ramorum, which it enters to feed, germinate and start the cycle all over again until little or no pathogen remains in the soil.

BioWorks and Widmer aim to capitalize on this “talent” by formulating the fungus into a wettable powder that can be added to nursery soils and potting mixes.

Read more about this research in the August 2017 issue of AgResearch.

Jan Suszkiw is with the ARS Office of Communications.