Greater success has resulted in growers developing more confidence in its use. 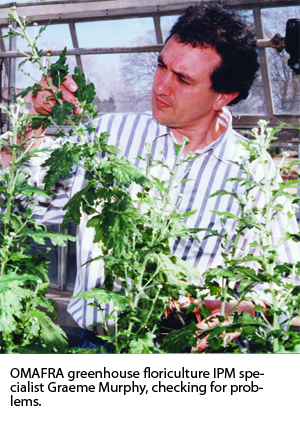 Biological control is becoming more mainstream, as increasing numbers of growers are realizing that it can play a very important part in their overall pest management program.

We have come a long way from the early 1990s when innovative growers took the first tentative steps down this new pest management road. Much has changed. There are new pests, new pesticides (many with a better IPM fit) and new biocontrol agents.

The number of growers using biocontrol in Ontario has increased rapidly in recent years and there are a variety of reasons given by growers for using biocontrol, but by far the most common is the reduced effectiveness of pesticides and the lack of suitable alternatives. Many growers have quickly come to the realization that biocontrol is the only viable option they have available, and under those circumstances the drive to succeed is very strong.
For those growers who are not using biocontrol, there are two main reasons growers put forward for their allegiance to pesticides:

•     They perceive biocontrol to be less effective than pesticides

•     they also believe that biocontrol is more expensive.

These are fairly major obstacles to overcome. For ornamental crops, effective pest control is paramount. How often have we heard the term “zero tolerance” for pests and diseases? (It so happens that I have serious issues with that term, but that is a discussion for another day.) What we cannot argue with is that ornamental growers (quite rightly) take effective pest management very seriously. And as for the cost? Anyone working in this industry is aware of the huge cost pressures under which growers are currently struggling. If growers perceive that biocontrol is more expensive than pesticides, then it becomes more difficult for them to justify making the change. At the same time, if they view it as a less effective option, then the decision becomes even more challenging.

Firstly how do we overcome the effectiveness concerns of many growers? It is easy to understand where some of the concerns about effectiveness have come from. In the early days of using biocontrol in ornamental crops (there’s no easy way to say this), failures outweighed success and bad experiences tend to stick in the memory. We were using biocontrol agents that were not as good as those we have now – but, they were all we had. And many of the pesticides available 15 years ago were not exactly biocontrol-friendly.

It is not easy to prove to a grower that biological control works; however, word of mouth among growers is spreading the increasing number of success stories, and that is probably as effective as any other way. Biocontrol is currently being used successfully by many different growers on crops as diverse as cut flowers (roses, chrysanthemum, gerbera and snapdragons), many potted crops and bedding plants, and on pests such as thrips, whitefly, aphids, mites, leafminer and fungus gnats. Effective biocontrol depends on a number of things being in place:

Good planning: Success is much more likely when working with those who have previous experience in biocontrol (other growers, biocontrol technical specialists, extension specialists and/or consultants) to ensure that pesticide residues will not be an issue, and that the right crop/pest/area of the greenhouse/time of year is chosen to maximize the chances for success. It is the time to develop realistic expectations of what biocontrol can do and an understanding of what it cannot.

Monitoring programs: Good monitoring programs are critical for pest populations and for the populations of natural enemies. Different monitoring strategies may be necessary. Yellow sticky cards will still work well for flying biocontrol agents such as parasitic wasps (but you have to learn to recognize new insects). However, where predatory mites are being used, a sharp pair of eyes and careful inspection of the plants is necessary to detect the very small mites as they move around on the leaves.

Adaptability: Biological control involves more than simply releasing the biocontrol agents at some pre-determined rate and waiting for them to do the work. The mosaic that makes every greenhouse situation unique includes the crop (and how it is scheduled), the greenhouse structure (glass vs. poly vs. screen house), the environment (e.g., heating/venting, irrigation systems, whether the crop is grown on benches or on the floor), and the location (e.g., Canada vs. the southern U.S.). All of these affect how biocontrol works and we need to take advantage of the uniqueness of each situation, adapting the program as appropriate.

Patience: Remember that realistic expectations are important. It is unrealistic to expect biocontrol to provide perfect control of pest problems within a few months when pesticides have been unable to do it despite years of use. And again, the shoulder to lean on, of someone who has experience in the use of bio-control, can take away a lot of the uncertainty.

And what about the economics of biocontrol? There is no question that the costs of biocontrol can initially cause some palpitations. But think about it. If (as is often the case in Ontario) growers begin using biocontrol in response to poor control with pesticides, then it is probably safe to assume that:

• There is a well-established pest popu-lation in the greenhouse and biocontrol will have to play catch-up
• There is likely to have been excessive pesticide use in the period leading up to the decision to go to biocontrol, resulting in residues that will retard the establishment of the biocontrol populations.

For these reasons, growers who are new to biocontrol often spend three to six months in trying to bring down pest popu-lations, using pesticides with residues that minimize the impact on biocontrol agents. Even then, it can take some time to establish the biocontrol program and exert control over the target pest. This period of time is often referred to (at least by me), as the six- to 12-month hump that growers need to get over when they first start a biocontrol program. This establishment period can be a difficult one for growers in terms of the effectiveness of the program, and in its cost, which can be more expensive in the first year. Being aware of this at the start of program takes away some of the surprise factor. As biocontrol programs become well established and growers continue to use them in successive years, costs usually are similar to those of pesticide-based programs.

It may help to provide some real-life examples of how growers have been able to maximize the effectiveness of their programs while keeping costs down.

• Consider the situation of a weekly potted chrysanthemum grower battling to control thrips and spider mites. An ongoing war waged with pesticides had been fought for several years and the pests were winning. In discussions with the grower, his IPM consultant and the biocontrol producer, a strategy was developed that made use of the fact that several varieties of mums were noticed by the grower to be especially attractive to thrips and mites.

The grower roots his cuttings in a long-day area for four weeks. In this area, the crop is pot tight, and the temperature and humidity high, ideal conditions for the establishment and spread of predatory mites. Weekly introductions of mites into this area covered all varieties very efficiently. When the crop was spaced into the main greenhouse under short-day conditions, the focus of the program switched to those varieties that were most attractive to the pests. Predatory mites were added to those varieties only, which were monitored closely. The strategy has worked very effectively for several years.

• The use of large quantities of yellow sticky tape can be useful in supporting a biocontrol program, especially where predatory mites are the primary control strategy (e.g., where thrips are the main pest target). If parasitoids are being used, the sticky tape may catch unacceptably high numbers of biocontrol agents.

• Banker plants have been used since the early 1990s for aphid control. They encourage the buildup and continual presence of aphid parasitic wasps in the greenhouse, resulting in more timely and efficient control of aphids.

Other banker plant systems have been used by growers in various ways. Dr. Lance Osborne in Florida developed a banker system for the predatory mite Phytoseiulus persimilis using corn plants infested with a mite called Bank’s grass mite, and another using papaya whitefly to produce parasitic wasps for whitefly control. Growers in Ontario have successfully used eggplant and tomato to attract greenhouse whitefly and encourage the buildup of Encarsia. Other banker plant systems are in the process of being developed.

•Some growers have their own mother stock plants, which they maintain on a year-round basis. Stock plant crops are an ideal place in which to use biocontrol. There are usually no flowers on which pests such as thrips can feed; the crop is often long term, which provides the biocontrol program with plenty of time to establish; and it is very intensive, with the future crop (unharvested cuttings) being crammed into a very small area. This allows for the efficient use of biocontrol, which is then carried with the cuttings into the rest of the greenhouse. Some of the most successful biocontrol programs in Ontario have commenced in stock plantings.

Biological control is becoming widely used as an IPM strategy in Ontario. Greater success has resulted in growers developing more confidence in its use and that message is being picked up by the wider industry. Biological control is no longer being viewed as a control strategy on the fringes of acceptability, but a real alternative to pesticides.

Graeme Murphy is the greenhouse floriculture IPM specialist with the Ontario Ministry of Agriculture, Food and Rural Affairs at Vineland. • 905-562-4141, ext. 106, or graeme.murphy@ontario.ca