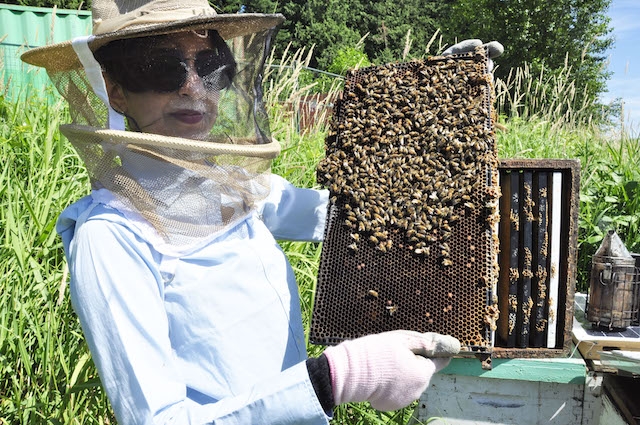 Aug. 4, 2017, Burnaby, B.C. – Simon Fraser University graduate student Oldooz Pooyanfar is monitoring what more than 20,000 honeybees housed in hives in a Cloverdale field are “saying” to each other – looking for clues about their health.

Pooyanfar’s technology is gleaning communication details from sound within the hives with her beehive monitoring system – technology she developed at SFU. She says improving knowledge about honeybee activity is critical, given a 30 per cent decline in the honeybee population over the past decade in North America.

Research into the causes of what is referred to as Colony Collapse Disorder continues. The presence of fewer bees affects both crop pollination and the environment.

Pooyanfar’s monitoring platform is placed along the wall of the hive and fitted with tiny sensors containing microphones (and eventually, accelometers) that monitor sound and vibration. Temperature and humidity are also recorded. Her system enables data collection on sound within the hives and also tracks any abnormalities to which beekeepers can immediately respond.

The high-tech smart system is being used to gather data over the summer.

Pooyanfar, who has been working with Chilliwack-based Worker Bee Honey Company, believes that better understanding the daily patterns and conditions, using an artificial neural network in the hive, will help to improve bee colony management. Current methods of monitoring provide less detailed information and can disrupt bee activity for up to 24 hours every time the hive is opened.

“To learn about what bees are communicating, we can either look at pheromones – the chemical they produce – or sound,” says Pooyanfar, who initially received funding through the MITACS Accelerate program.

The City of Surrey is providing the field space for her research.

Pooyanfar, a graduate student in SFU’s School of Mechatronics Systems Engineering, plans to eventually manufacture a sensor package for this application to help lower the costs of monitoring and allow more beekeepers to monitor their hives in real-time. Her initial-stage research was featured at the Greater Vancouver Clean Technology Expo last fall.

Biologists are working to better understand Colony Collapse Disorder given the value of honeybees to the economy and the environment. Monitoring bee activity and improving monitoring systems may help to address the issue.

According to B.C.’s Ministry of Agriculture there are more than 2,300 beekeepers throughout B.C. operating as a hobby, part-, or full-time business with about 47,000 colonies, and as many as two billion bees.

The ministry also notes that honeybees play a major role in agriculture as pollinators of crops, contributing an estimated $470 million to the economy in British Columbia ($250 million in field crops and $220 million in greenhouse crops), and over $2 billion in Canada.