Features Crop Culture Crop Protection Fertilizer
When it gets hot, watch out for blossom end rot!

A physiological disorder, blossom end rot can lead to 50 per cent yield losses in some circumstances.

Blossom end rot is typically characterized by a water-soaked dark spot on fruit at the end furthest away from the stem. all photos © Queen’s Printer for Ontario, 2021

Last summer, greenhouse vegetable producers were not only dealing with COVID-19, but they also had to contend with some of the highest temperatures recorded in years. As a result, a number of tomato and pepper producers noticed an increase in the prevalence of blossom end rot (BER).

What is BER, and what are the factors that promote or inhibit it? This article provides information from the latest research. Most of the studies cited here were performed in tomatoes but are also applicable to peppers.

BER is a localized physiological disorder characterized by increased permeability and deterioration of fruit cell membranes, with subsequent loss of turgor and leakage of cell liquids.

Typical symptoms appear two to four weeks after anthesis (flowering), when the fruit is in rapid expansion. It is often characterized by a large
water-soaked dark spot at the distal part of the fruit (away from the stem). BER might also develop inside the tomato fruit without external symptoms, causing black seeds or black pulp.

The disorder can cause up to 50 per cent yield losses in some circumstances.

BER is primarily associated with local calcium (Ca) deficiency in fruit tissue, and there are a number of factors that contribute to this.

Ca is critical for cell wall stabilization and integrity, and it plays a key role in promoting shelf life. Ca is also an immobile element, meaning, unlike other elements that move in the phloem, it travels through the xylem and movement depends on transpirational water flow. Because of the higher rate of transpiration through the leaves, more Ca is directed there rather than the fruit.

Water flow itself is also regulated by Ca. The nutrient regulates water movement on the outside of cells through changes in cell wall structure and stomatal openings, and it helps control water flow into cells via membrane channels called aquaporins. This forms a feedback loop where a reduction in transpiration lowers water and Ca movement into cells, and that reduction in Ca reduces water flow even further, which in turn reduces Ca levels further still.

When Ca enters the fruit tissue, it accumulates in the proximal half of the fruit (closest to the stem), which leads to low Ca levels in the distal half of the fruit (away from the stem). The resulting Ca gradient greatly affects fruit development, especially during rapid cell expansion. Insufficient uptake and movement of Ca to the blossom end of the fruit at the early and rapid expansion stages of fruit development can lead to BER. Some studies have shown that when Ca decreases below 0.2 µmol g-1 fresh weight (0.2%) in the distal part of immature fruits, the risk of BER occurrence becomes critical.

Ca shortage and mis-translocation may not, however, be the only determinants of BER.

Some studies have shown that Ca availability to the roots does not always correlate with BER. Fruits exhibiting BER can have similar levels and distribution of Ca compared to healthy fruit.

Recent studies have shown more complex mechanisms regulating BER incidence in tomato fruit. Heat and water stress can trigger oxidative stress and build up reactive oxygen species (ROS). This typical cell stress response can lead to leakiness of the cell membrane and BER symptoms due to the negative affects of ROS on cell membrane integrity.

But there’s a link between oxidative stress and Ca levels as well.

Oxidative stress can lead to a reduction of Ca levels. In other words, low Ca in fruit exhibiting BER may be an effect of BER, and not a cause. This happens in some fruits that exhibit BER, but not all.

BER is more prevalent in large tomatoes, such as beefsteak, rather than smaller ones, like cherry tomatoes. This is known as the “fruit shape effect.” BER is generally associated with large and mostly plum-shaped fruits, where the rapid expansion of cells in the distal portion could lead to inadequate Ca translocation.

Cultivars that are more susceptible to BER typically have not only bigger fruit, but larger leaves than BER-resistant cultivars. Owing to their greater need for water, bigger leaves increase Ca uptake by roots, but their greater rates of transpiration also divert Ca to the leaves and reduce Ca accumulation in distal parts of the fruit. Some BER-resistant cultivars have lower stomatal densities in their leaves, which lead to lower transpiration rates and more water and Ca flow into the fruit.

Interestingly, BER symptoms have never been reported in wild tomato species. This is thought to be another example of the fruit shape effect because wild tomatoes are typically smaller in size than cultivated tomatoes. BER-resistant tomatoes have also been shown to have higher fruit antioxidant capacity, which makes them better able at reducing oxidative stress and its damaging effects on cell membranes.

High temperatures and solar radiation also induce higher rates of photosynthesis and transpiration in leaves, which cause more water and Ca to be directed towards leaves rather than fruits. These factors promote BER during high stress conditions. 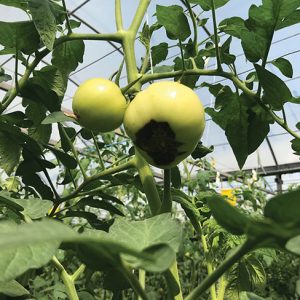 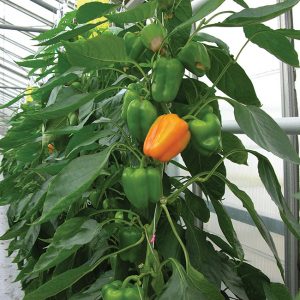 Heat and water stress, calcium shortages and genetics are just some of the factors that contribute to blossom end rot.

Foliar sprays: A common way of inhibiting BER is by spraying the fruit with Ca solutions to increase Ca levels in the fruit. This could include 0.3-0.5% solutions of calcium chloride, or 2 to 7 g L-1 calcium nitrate. However, these sprays are labour-intensive in that only the fruit should be sprayed and not the whole plant. Spraying leaves is inefficient because Ca absorbed by the leaves is not translocated to the fruits. It has also been shown that Ca sprays are more effective on cultivars less susceptible to BER than highly susceptible ones.

A number of plant hormones have been shown to reduce BER when sprayed on the plant. Epibrassinolide (EBL), for example, reduced BER by 44.2 per cent in one study. This effect was associated with a reduction in leaf transpiration, higher Ca levels in the distal portions of the fruit, and increased activity of antioxidants. Another study showed that weekly foliar sprays or root application of the plant hormone abscisic acid (ABA) increased Ca levels in distal fruit tissue and reduced BER.

In contrast, gibberellins (GAs) can reduce fruit Ca uptake, leading to leakier cells and increased BER incidence. GAs increase stomata density and stomatal conductance, which increase Ca transport to the leaves at the expense of the fruit. GA also induces expression of proteins involved in transporting Ca into cellular storage organelles, which leads to lower levels of Ca available for cell maintenance.

Pruning: Regulation of plant density and truss thinning have also been historically adopted for the regulation of tomato fruit size and BER incidence.

Another study showed that de-leafing (removal of alternate leaflets on all three leaves above a flowering truss) increased Ca levels in distal portions of tomatoes, which was associated with a reduction in BER incidence. This treatment resulted in 20 to 30 per cent fewer leaves, but fruit growth rate increased. The authors hypothesized that the reduced competition for water between leaves and fruits allowed sufficient Ca to be transported into the fruits at a critical time before BER was triggered. Interestingly, pruning increased Ca levels to a greater degree in the fruit of BER-susceptible cultivars than in less susceptible cultivars. This is, again, thought to be due to the greater rate of transpiration of BER-susceptible cultivars with their larger fruits and leaves.

Nutrient balance: Ca uptake and distribution is depressed by other cations such as sodium (Na), potassium (K) and magnesium (Mg,) and this may increase BER. For example, the presence of K, Mg, and Na in the nutrient solution at levels above 400, 80, and 500 mg L-1, respectively, might decrease Ca uptake in tomato.

In other studies, higher tomato yields were attained when the K:Ca ratio was between 0.82 to 0.85 in the summer months, but higher Ca levels (0.67 K:Ca ratio) may be necessary in the autumn-winter season. Lower temperatures and higher relative humidity reduce transpiration rates and Ca transport.

Rhizosphere: It has been shown that the rhizosphere microbiome is important for control of BER.

Incidence of BER is correlated with the relative abundance of microbes in the rhizosphere. For example, a study showed that biofertilizers (fertilizers enriched with microorganisms) with the Gram negative rhizobacteria Pseudomonas LSW25R colonized the rhizosphere of plants and reduced BER presumably by increasing Ca uptake. This demonstrates the importance of monitoring the microbiome of nutrient water solutions in both recirculated and non-recirculated water systems to ensure a proper growing environment for roots.

A study compared tomato seedlings grown hydroponically in peat, perlite, and a 1:1 mixture of peat-perlite before being transplanted into rockwool slabs. Plants grown in perlite were smallest, most likely due to perlite’s inability to retain nutrients. While this did not result in significant losses in total yield or weekly yield of marketable fruit, it did lead to lower production of lower grade tomatoes. The smaller perlite-grown plants also had only 14 g of fruit per plant that exhibited BER symptoms per week, whereas bigger plants grown in peat and peat-perlite mix had 45 g and 44 g of fruit per plant exhibiting BER, respectively, per week. The reduction in BER incidence in the smaller plants is thought to be at least partially related to the smaller size of their leaves and their lower transpiration rates.

There are some key steps growers can take to reduce their risk of BER.

Reduce heat stress: Growers can use whitewashing of greenhouse roofs and/or shade curtains to reduce high levels of solar radiation and associated high temperature stress. Some of the new energy curtains have light transmissions between 85 to 89 per cent, and they can also be used in the summer as shade curtains. Try to also reduce night temperatures to promote fruit set in the summer. High night temperatures and high levels of humidity reduce the viability of pollen in the summer, causing poor fruit set. Poor fruit set in combination with an abundance of photoassimilates in high temperatures increases BER.

Reduce water stress: There can be big differences in light intensity and temperature between cloudy and sunny days as well as hotter and cooler days. This causes large differences in the level crop transpiration. Irrigation should be adjusted quickly and precisely to match such environmental conditions.

Fadi Al-Daoud, PhD, is the greenhouse vegetable specialist at the Ontario Ministry of Agriculture, Food and Rural Affairs. Xiuming Hao, PhD, is a research scientist at Harrow Research and Development Centre, Agriculture and Agri-Food Canada. They can be reached at fadi.al-daoud@ontario.ca and xiuming.hao@canada.ca