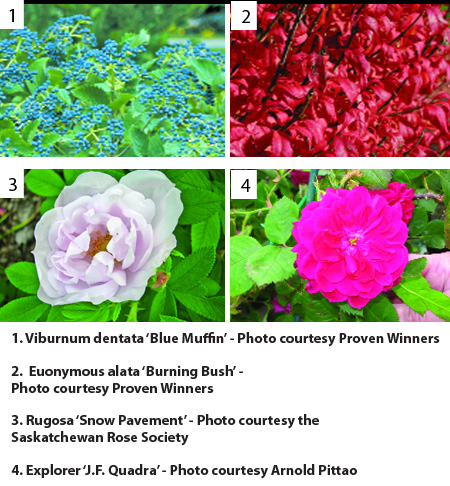 For November and December the list includes shrubs and trees that keep their berries and have strongly coloured stems including mountain ash, with large clusters of red berries that persist until after Christmas, winterberry (Ilex verticillata) with bright red berries on black stems and Viburnum dentata ‘Blue Muffin’ with stunning, true blue berries beginning in late fall.

Canadian Gardening, summer 2007, combines ornamental grasses with shrub roses to produce a perfect partnership for late summer and fall gardens. Mix and match rose choices include R. ‘Kakwa’ and R. ‘Fru Dagmar Hastrup’, each with large, brilliant orange and red tips that last into fall and winter, extending their ornamental value in the landscape. Ornamental grass choices include:

• ‘Adagio’ Maiden Grass (Miscanthus sinensis ‘Adagio’), that grows as high as 1.2 metres and is narrow and clump-forming. Its silver-grey foliage turns yellow in autumn, the silvery tan flowers are pink-tinged and appear in late summer and creamy white seedheads show up in fall and winter.

• Red Fountainbush Switch Grass (Panicum virgatum ‘Rotstrahlbusch’) grows to 1.2 metres. This clump-forming grass has green foliage with red-tinged tips that intensify in colour and enlarge as the season progresses and burgundy flowerheads that turn beige as seeds form in the fall.
The summer 2007 edition of Gardening Life asked five of Canada’s top rosarians to name their favourite roses. Answers included:

• ‘Windmill,’ a modern shrub rose whose single white flowers have mauve-pink edges and a unique twist to its petals, from John Vanderkruk, of Hortico Inc., Waterdown, Ont.