News
What to expect with the weather this fall 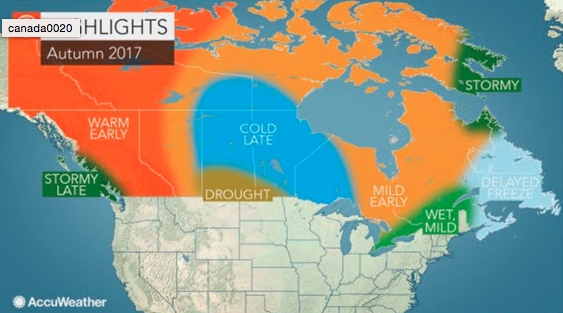 Sept. 7, 2017 – AccuWeather reports overall, a mild autumn is in store for much of Canada this year. However, a flip in the weather pattern may send waves of cold air across the Prairies and storms into British Columbia during the second half of the season.

Mild, wet pattern to delay first freezes in eastern, Atlantic Canada: The first half of autumn will feature predominantly mild and wet weather across eastern Canada before chilly air blows in from the Arctic.

“A wetter weather pattern may set up from southern Ontario through Quebec and into the Maritimes for October and November, but temperatures will be higher than usual, especially at night,” AccuWeather Canadian weather expert Brett Anderson said.

This may cause the first frost and freeze of the season to occur later than normal for many areas.

Drought to extend fire danger in the Prairies: Severe to extreme drought has built across part of the Prairies this summer and is predicted to continue into the fall.

“Little is expected in the way of drought relief for southern Saskatchewan and southern Manitoba,” Anderson said.

Regina is one of the cities in the area of extreme drought, according to the Canadian Drought Monitor.

The abnormally dry weather has caused the ground to shift, contributing to dozens of water main breaks around the city, the CBC reported.
More breaks may be possible into the fall as dry conditions persist.

Ongoing dryness will also contribute to a higher-than-average fire danger across the southern Prairies and into northwestern Ontario.

Winter weather may arrive early in the eastern Prairies as waves of cold air sweep in from the Arctic.

“There is the potential for an earlier-than-normal freeze over the eastern Prairies and northwestern Ontario, with November featuring several shots of winterlike cold air,” Anderson said.

“Warm and dry conditions are expected to persist in southern British Columbia into the first half of fall with ongoing, large wildfires across the interior,” Anderson said.

However, a major flip in the weather pattern is in store for the region later in October.

“A pattern change in the second half of the season is expected to deliver stormier conditions to western British Columbia,” he said.

Rain from these storms will help to extinguish some of the wildfires while winds blow in fresh air, improving the region’s air quality.

These storms will also help to deliver colder air and snow to the Canadian Rockies, helping to put down a fresh base for ski resorts across the region toward the end of the fall season.