Mechanization, automation and value-added merchandising were just a few of the themes covered in a recent study tour of the Netherlands and Germany. 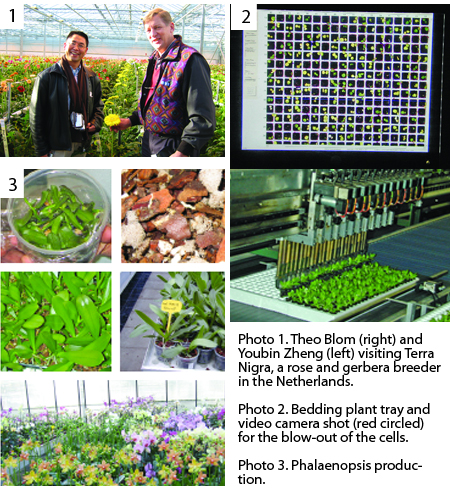 The authors (Photo 1) took part in a tour through the Netherlands and Germany between Jan. 21 and 27, 2007. The tour was organized by the American National Floricultural Forum, which is a group consisting primarily of academia. In the Netherlands, the group visited Wesselman Flowers (a hydroponic forcer of tulip bulbs), Ball Holland (seedlings and rooted cuttings), Humako Plant (Africa violets), Hoogendoorn Orchideeen (orchids), P.J.J. Vollebregt Cyclamen (cyclamen), Terra Nigra (cut rose and gerbera breeder), Braam Youngplants (fern propagator), Waterdrinker (a pot plant wholesaler for small-volume buyers), De Gooijer International (a cut flower and pot plant exporter) and the Applied Plant Research Institute in Lisse, where they do primarily bulb and nursery research. In Germany, we toured the International Trade Fair for Plants (IPM) in Essen and visited Dummen nurseries (supplier of cuttings of annual plants). The following are some of our observations.

At Ball, we saw an example of sorting and repackaging of Matthiola (stock) seedlings (Photo 2). The cells with seedlings having dark-coloured cotyledons (single blooming types) or empty cells were blown out of the seedling tray after scanning with a video camera (top photo). After the blowout, the seedling trays with the light-coloured seedlings (double flowering) were mechanically re-assembled in a seedling tray (also by a robot) so that they could guarantee a given number of seedlings per tray as well as plant size (lower photo).

At Dummen, Germany, and Vollebregt, the process from rooted cuttings/seedlings to the final packaging of the cuttings for shipping was also done by machines. The main reasons given for these investments were labour savings and selling very uniformly sized seedlings.

Two: In terms of energy, the larger greenhouse operations in the Netherlands have their own power generation systems. When fossil fuel is cheap and hydro prices are high, the growers produce electricity from their generators to the electrical grid system. When fuel is expensive and/or electricity price is low, the growers switch back from the grid. Decisions are made often on an hourly basis. The heat produced in this process was stored in water storage systems. Heat storage capacity was about 100 m3/ha.

Three: The market for most of the conventional floricultural crops (especially pot plants) was saturated and over-production was quite noticeable; average (annual) prices at the auction given were $0.90 CDN for a 12-cm pot of African violets; and $1.50 to $2.00 CDN for a 15-cm potted cyclamen. We could buy 25 stems of high quality cut tulips for $8 CDN in the supermarket in Amsterdam. As a result, we noticed that many potted plant growers were de-specializing and looking for alternate crops to grow.

On the positive side, orchid demand and production have been steadily increasing in double digits during the past years (an increase of 15-20 per cent per year). Most of the orchids sold in Europe were produced from tissue culture. The time required to produce a marketable potted flower (Phalaenopsis sp.) from a tissue cultured plantlet takes about 18 months (Photo 3). Some of the plantlets were imported from Asia (such as China, Thailand) and then grown in greenhouses in Europe for about 20 to 30 weeks before being sold. There are more orchids available on the market now than before, and the price is dropping. The positive side of this price drop was that they were able to sell over a greater distance in Europe as there is the perception of a maximum price for a plant (final price = auction price + delivery!), so as the price dropped, the plants could be distributed over a greater area in Europe, thereby creating a greater demand. Also, when the price dropped, more people could afford to purchase orchids.

Four: Hydroponic production (water culture) of cut tulips in the Netherlands has reached about 65 per cent of the total cut tulip production (Photo 4). There were a number of reasons given: (i) Lower space requirement for the cooling of the bulbs, as the bulbs are dry-cooled in bulk for about 12-14 weeks before planting in the hydroponic trays. By scheduling and controlling the temperature treatments, it is possible to produce and supply cut tulips on a weekly basis. A big difference is that instead of planting bulbs in the fall (crates with ‘soil’) and harvesting during the winter/spring, the hydroponic system requires planting and harvesting during the winter/spring, which requires a bit more organization.

(ii) Hydroponic production requires less input and less waste, and can be highly mechanized from planting to harvesting compared to ‘soil’ production. Interesting was the fact that the leftover bulbs were fed to cattle.

(iii) Botrytis had become less of an issue with this production system. The so-called ‘pin’ tray without recirculation of the nutrient solution is still the most popular system. New research at the Applied Plant Research Institute indicated that the ebb-and-flow system using the ‘honeycomb’ trays provided a higher fresh weight of the harvested stem (+15-20 per cent) than from the common pin tray system.

Five: The bedding plant industry was interesting in the Netherlands. Breeding companies such as Syngenta (production of more than one billion seedlings/year) and Ball Holland produce plugs in special returnable (the government demands that trays are recycled!) trays with 20-cm-long legs on the corners (Photo 5).

These trays were developed for automation, for flexibility in growing systems (benches, concrete floors and/or mats), as well as for shipping. The process of seeding the bedding plants in these trays usually happens at the big companies (they have the equipment) and the trays are then grown ‘on’ on their own operation or contracted out to growers, who raise vegetable transplants in an earlier period (December to February). When the plants are ready for shipping, the trays are returned to the big warehouses of the breeders, and from there are shipped all over Europe.

Trucking at most operations was contracted out to transporting companies. This appears to work due to the high concentration of greenhouse operations (they are all just around the corner!). Another big difference in the plug production industry is that in North America, many plug trays are shipped via brokers and often in company trucks. This is not the case in Europe (all sold directly to the producers). Also, trucking companies are used to do most of the shipping for the growers and exporters in the Netherlands.

Six: Some interesting points! (i) At the cyclamen grower, we noticed that the bases of the irrigation troughs were covered with a layer of dark, perforated plastic to prevent green algae (Photo 6);
(ii) At the orchid grower, we saw an internal light sensor on a moving arm (2 m long), which rotated back and forth in order to get a representative reading of the light level inside the greenhouse (Photo 7). This grower also combined their shade/humidity screen (Photo 8); (iii) The greenhouse industry in the Netherlands is a strong exporter of young plant material, not only in Europe, but also all over the world. Therefore, they have to comply with phytosanitary regulations of the importing countries. In order to get pre-inspection approval for export, the growers have to comply with several conditions. At ‘Braam Youngplants’, we experienced what it means to be certified for export to North America. There was a separate compartment for the propagation material. In order to move from one compartment to the ‘isolated’ compartment, one had to go through a pressurized hallway with double doors to prevent insects from flying into the export area (Photo 9). At Braam Youngplants, we also saw an automatic transplanter in action (Photo 10), while at Humako we observed a dispenser of finished product into a shuttle tray (Photo 11).

Seven: Floriculture is a global industry. We noticed that in the European market, there are lots of products from South America (e.g. bulbs, cuttings and cut flowers), Africa (e.g. cut flowers and cuttings), and Asia (e.g. tissue cultured orchids and foliage plantlets, bonsai). Some of the products can be produced much faster and cheaper in those countries. Many propagators contract out the labour-intensive parts of their business (e.g. cutting production, tissue culture and seed production). Most of the materials are flown ‘in’ in small containers and finished in their production greenhouse. Orchids and bonsai plants are getting more and more popular in Europe, and are good examples of what can be achieved.

Eight: Biological pest control is getting more and more popular because of society’s environmental consciousness and the pressures from the government on reducing chemical usage. Production of plants in a sustainable or environmentally friendly way has become part of the operational mode of thinking in Europe. It is sometimes forced upon growers by the government (limit on gas consumption!), or it is happening through their MPS system. Unfortunately, growers commented that the price of the product is hardly affected by the MPS rating system, and they showed considerable skepticism.

Nine: The Dutch flower industry is trying to remain at the centre of the ‘World Floral Exchange.’ They do that partly through the concentration of the industry, the auction system, and the Hortifair. Foreign producers are allowed to become members of the auction system, which is/was a co-operative of the local growers. Another interesting development is that the Dutch are trying to be trendsetters for what consumers want/ need. At Waterdrinker, they had a group of designers, who were working with artists in order to create contemporary concepts. These concepts were then transferred to a design with (flowering) plants as part of a gift package. They decorate their plants with colours and low price materials to increase their products’ value and provide their consumers with value-added products (Photo 12). It reminded us of the Martha Stewart Living concept.

Ten: At Terra Nigra, we saw the breeding work on the cut miniature and standard gerberas as well as the cut roses. One of the new developments was the use of wider beds and four rows of gerberas instead of the two-row system we normally see in Canada. They also used three heating systems for the crop in order to optimize the micro-climate around the plants (Photo 13).

The authors would like to thank Flowers Canada (Ontario) and Ontario Centre of Excellence for their financial support for this trip.