Cultivating by artificial intelligence, these vertical farming modules are bringing fresh herbs and leafy greens straight to the consumer.

One of the largest and fastest-growing vertical farming platforms in the world, Infarm’s smart farming modules are bringing a whole new meaning to the word “hyperlocal.”

Best recognized for their grocery store installations that have appeared all over the globe, shoppers are able to watch the growing process and pick from fresh herbs and leafy greens immediately after harvest. Maintained by machine learning and AI technology, each standalone vertical farming unit is continuously monitored and tweaked to ensure optimal growing conditions.

“We control our farms remotely using sensors and a centralized, cloud-based platform that adjusts and improves itself continuously, so each plant grows better than the one before – providing plant seedlings with an ideal combination of light spectrums, temperature, pH, and nutrients for optimal growth,” explains Emmanuel Evita, global communications director for Infarm.

Using machine learning, big data and IoT technologies, the Berlin, Germany-based company is able to collect large amounts of data from their farms around the world in real-time, amounting to more than 50,000 data points within a plant’s lifetime. And the modules aren’t just for grocery stores. Infarm says their easily scalable and rapidly deployable technology has been set up in distribution centres, restaurants and other urban spaces to match local needs.

“With more than 1,000 farms in stores and distribution centers, we’re able to use the data on each one of more than 500,000 plants we grow every month to understand their unique growth patterns and offer the highest quality product to consumers,” says Evita.

The company is deeply committed to improving the safety, quality and environmental footprint of food production. Offering an ever-expanding catalogue with over 65 different combinations of herbs, microgreens and leafy greens, the range of products includes cooking staples like Italian basil to specialty varieties such as wasabi rucola. Infarm’s plants are also grown without the use of chemical pesticides and are locally germinated in their nursery farms. The seedlings are then cultivated in-store for another three to four weeks to maturity before being offered to consumers. The vertical farming units are said to require 95 per cent less water, 90 per cent less transportation and 75 per cent less fertilizer compared to conventional soil-based agriculture. 90 per cent of electricity used by the Infarm network is sourced from renewable energy, and the company has set a target to reach zero-emission food production next year.

“We save thousands of food kilometres by not shipping from abroad, removing trucks from the road, and increasing the resilience of the global food system with every farm we install. Our approach supports biodiversity by reducing and almost eliminating the supply chain of food,” says Evita. 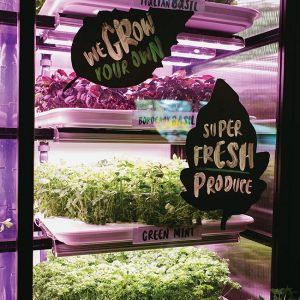 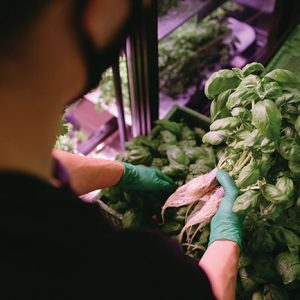 Infarm modules can be installed in distribution centres, grocery stores and even restaurants, such as Layla Restaurant in Berlin, Germany pictured above. Photo credit: U. Eichhorn, InFarm

“Our partnership with Infarm is unique in Canada and offers our customers a world-leading urban farming solution,” says Niluka Kottegoda, vice president of customer experience at Sobeys. “By the end of September, we will have fully functional vertical farming units in 28 of our Safeway and Thrifty Foods stores in the Vancouver and Victoria areas with several additional stores carrying the harvested herbs and lettuce.”

Kottegoda says their customers have been responding very well to this urban farming solution. “Not only do they appreciate the sustainable nature of the farms, but they certainly love having access to the freshest possible leafy greens and herbs all year long.” Empire expects to bring Infarm installations into Toronto soon, with a national rollout on the horizon.

In September, Infarm announced another $170 million in the first close of a funding round expected to reach $200 million. That will bring in over $300 million of funding to date.

By investing this capital into infrastructure, research and development, the company expects to grow their installations by 10 per cent, reaching over 5,000,000 sq. ft. in the next five years.

“The coronavirus pandemic has put a global spotlight on the urgent agricultural and ecological challenges of our time,” says Erez Galonska, co-founder and CEO of Infarm. “As we scale to 5,000,000 sq. ft. in farming facilities across Europe, North America and Asia by 2025, this investment will help us make a truly global impact through our network, preserving the thousands of acres of land, millions of liters of water and ultimately change the way people grow, eat and think about food.”