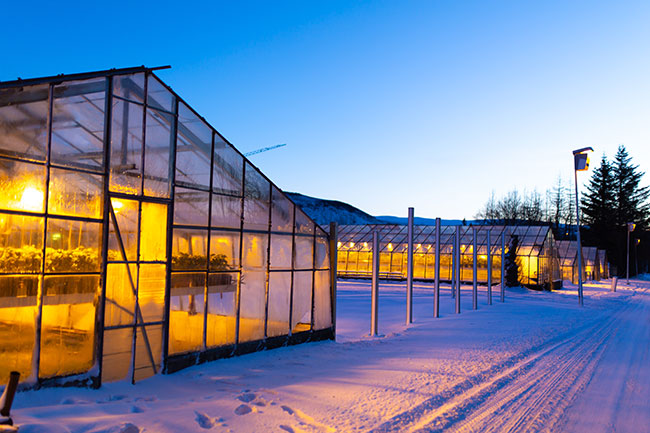 In countries such as Iceland, greenhouses can be found harnessing geothermal energy. photo courtesy of Kateryna Kukota/GETTY

It is classified as a clean, renewable energy source,2 harnessing the heat found within the Earth’s crust.2 GTE sources also heat water found at or near the Earth’s surface in the form of geysers, hot springs, steam vents, and underwater hydrothermal vents.3

When a GTE source offers energy above 120°C, electric power can be generated with the appropriate technology – this is referred to as deep or conventional geothermal.1 When ambient temperatures are at 5–30°C, they can be utilized by ground-source heat pumps to create heating and cooling for buildings.1 GTE, at this temperature, can be used for heating and providing electricity for greenhouses, fisheries, homes, and industrial processes like lumber drying and processing pulp and paper.3,4

GTE in Canada and worldwide
Worldwide, GTE produced more than 85,891 GWh of power in 2017 and this is expected to increase by 28 per cent by 2024.4 Canada does not currently produce electricity from GTE on a national scale. This is due to high upfront costs, the absence of strong regulatory and policy support, and competition from established and less costly sources of electricity.4 There is potential for GTE use in Canada for British Columbia, Alberta, Saskatchewan, Yukon, and the Northwest Territories, and this potential is being explored in a few projects.4,5

The Benefits
“The beautiful thing about geothermal is if we have the energy to produce power. [If] the heat source is managed properly, then there is no interruption to the ability to continuously produce power as long as the mechanical systems do not fail or require maintenance,” comments T.M. Gunderson, managing partner, Enerpro Engineering Inc.

GTE is considered ‘clean’ because usually only water vapour escapes, although some systems release small quantities of sulfur dioxide, nitrous oxides, and particulates.3 Using GTE could help Canada meet its CO2 reduction targets.5 A geothermal power plant can last for centuries. For the amount of power it produces, its surface square footage is small relative to wind, solar, or coal energy sources.3 It is an energy source that can supply clean, sustainable, non-carbon renewable energy that can be used for power, heating, and cooling with limited emissions.6 Examples of countries using GTE to heat greenhouses are Australia, Iceland, United States, Iran, Tunisia, Japan, and Europe.6

In isolated communities, GTE sources offer a cleaner alternative to diesel fuel used for heating and electricity,6 and could potentially power greenhouses. This would aid local food production and food security while lowering food costs.6

A 2019 study in three communities, Resolute Bay (Nunavut) and Moosonee and Pagwa (Ontario), found that GTE could supply heat and power sources that were local and available year-round.6 The researchers concluded that geothermal-powered greenhouses offered local communities an increased quality of life and a cheaper source of fresh vegetables.6 The study concluded that the initial expenditure for the project was balanced by these advantages, along with cost-effective vegetable production, and reduced reliance on diesel fuel.

The Yukon is an area of Canada that can benefit from GTE.7 A 2016 report by the Canadian Geothermal Energy Association found that the territory can produce a minimum of 1,700 megawatts of geothermal capacity. The report stated that many communities, such as Whitehorse, Carcross and Teslin, had geothermal deposits capable of producing electricity using GTE.7

Maurice Dusseault, professor of Engineering Geology, University of Waterloo, notes “Yukon greenhouses can be heated with water from hot springs, and if you drill down a couple of kilometres, you can find water hot enough to generate power.” Dusseault is cautious about being overly optimistic about GTE. He states “many factors [are involved]. For example, during what months are the greenhouses active? All year or March to October? In Victoria, B.C. or in Yellowknife, N.W.T.? How warm is the water and at what rates is it produced?” Considerations include the GTE source, how the energy is generated and how it is utilized, the community where the greenhouse crops are grown, as well as the crops themselves. “The solution depends on each application/situation. What might be the optimum solution in Quebec will not necessarily be the best strategy for Saskatchewan,” states Gunderson.

The Disadvantages
In Canada, GTE use is constrained by location, quality, form it comes in, and distance from GTE source to end users.5,6 Many parts of Western Canada in particular have the conditions necessary for GTE use, while other areas do not.

Isolation increases need and installation costs. Research into geothermal-powered greenhouses, with Resolute Bay, Moosonee and Pagwa as the sites studied, found that geothermal energy applications require high capital investments.6 The cost to establish a greenhouse in Resolute Bay was estimated at ~$15M while in Ontario communities the cost was ~$5.7M.

Most Canadians receive their energy through a regional electricity source.5 This is one of the reasons why there is limited incentive to create GTE sources in the ‘south’ and non-industrial areas.

“Commercial geothermal power plants are not implemented in Canada, despite the fact that some provinces like British Columbia, Yukon, Alberta, and Saskatchewan have a suitable potential for using geothermal energy from hot springs,” observes Dr. Alireza Dehghani-Sanij, Department of Mechanical and Industrial Engineering, University of Waterloo.

Greenhouse GTE: Concerns
“The optimum would be for a large agricultural greenhouse industry using natural geothermal heat, to generate enough power to operate the fans, the grow lights, the pumps and all the utilities and electrical equipment, while using remnant heat to keep greenhouses at appropriate growing conditions.” Dusseault comments, “This allows for a 12 month/year greenhouse operation.”

In contrast to the source for GTE found in the Yukon, Dusseault observes how in Southwestern Ontario a “different type of ‘geothermal’ is widely used” – geoexchange. In southern parts of Canada, he notes: “Shallow ground-source heat pumps extract heat from the ground in the cool months, and dump heat into the ground in the warm months like a fridge but run in both directions.” He adds that this approach would not work in the north “where you have huge heat requirements and small ‘cool’ requirements. You cannot extract heat from the ground indefinitely; it becomes cold and very inefficient. You have to have some other heat source to recharge the thermal battery in the ground in this case.”

“Retrofitting is always possible, but it can be costly,” Dusseault comments. He adds that to adapt an existing greenhouse to take advantage of GTE, it is “best to design your greenhouses to use ground source heat pumps, and this means that you are using less energy. If a ‘warm water’ source from elsewhere (geothermal, waste heat from a nuclear reactor, from a plant) becomes available, the system can be easily and relatively cheaply modified to take heat from that source. If your greenhouse is 100 per cent electrically heated, retrofitting is more costly.”

Gunderson observes that the choice of GTE should be based on a “discussion between the greenhouse owner and an unbiased consulting company that can look at the energy options available, then select the optimal solution based on current and future growth of the business and future cost of energy.”

Canada’s geothermal future
GTE’s future in Canada will be affected by Canada’s commitment to achieve net-zero emissions by 2050.8 Financial analysts comment that, while the demand for energy increases in Canada, there is a lack of new development to meet demand, although Canada is planning to use GTE for industrial use.9 There are opportunities for greenhouses to make use of the excess heat.

GTE-powered greenhouses have robust potential in Canada. Growth will likely occur through partnerships for funding and implementation, and, to some extent, customization of food production and delivery.