Features
Small but mighty: Growing on a small footprint

Lettuce grower works to minimize costs to consumers, the environment and the bottom line. 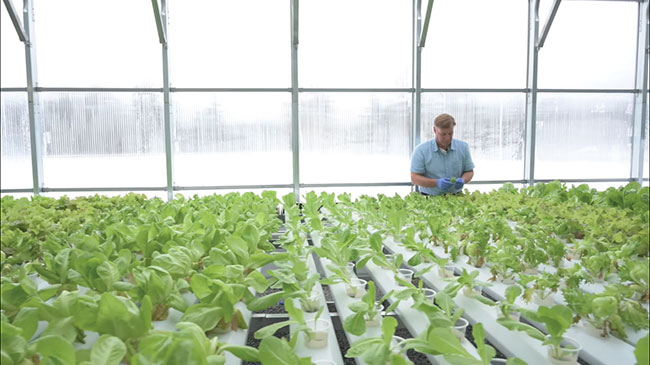 Any extra heat stored can be used at a later point in time. Photoscourtesy of Ceres Greenhouse Solutions

When he switched from investment management to horticulture, Rob Lyle had a clear goal in mind – to grow fresh, local produce year-round using the least amount of resources possible.

“We wanted to grow vegetables in a northern climate in a highly energy-efficient way,” he says. “We needed a greenhouse that’s got a small footprint [and] can produce a good portion of greens within 30 km of the greenhouse, day in and day out, all year.”

Searching for a solution, Lyle came across the concept of a passive solar greenhouse paired with a geoexchange system – both designed by Ceres Greenhouse Solutions based in Colorado, U.S.A. The result was greenshaus Inc., a 2,000 sq. ft. facility in Almonte, Ont. which opened in 2019. Today, the producer harvests 1,000 to 1,200 heads of live-root lettuce each week, among other leafy greens.

The greenhouse structure itself was built to maximize retention of the sun’s energy. “We only have glazing on the south roof and half of the south wall. The rest of it is all insulated steel panel,” Lyle says. Even the slope of the roof was designed to capture more of the sun’s rays, particularly in the winter when the sun is lower on the horizon.

In pairing a passive solar greenhouse with a geoexchange system, any extra heat can be stored then used at a later point in time.

Unlike deep geothermal where users tap into the Earth’s intrinsic heat or use the secondary heat from geothermal power generation, geoexchange leverages the ground as a battery. When temperatures in the greenhouse are high, the heat is gathered and stored in the ground. When greenhouse temperatures drop, the stored heat is brought back above the surface.

On a sunny day, Lyle says they use the geoexchange system to cool the greenhouse, storing the warmth below ground. In this instance, it’s a proprietary system known as GAHT (Ground to Air Heat Transfer), also designed by Ceres. “When the greenhouse goes below 12 degrees Celsius, our geo system comes on.” It’s when the temperatures drop by too much that he switches to a high-efficiency 65,000 BTU propane heater.

That cost included electricity for the winter LED grow lights, the intensity of which are adjusted based on historical light levels in the local area as well as the crop’s needs. Every month, Lyle works with Ceres’ greenhouse engineer, Hervé Maumus-Hue, to tweak the lighting program as needed.

“Lettuce is probably the least energy-hungry – it’s a very cold crop that works well in the winter. You don’t need to heat as much, and you don’t need to supplement as much in terms of light,” says Maumus-Hue. He suggested and helped install the grow lights in 2019 to improve the size of the lettuce heads. For the greenhouse engineer, other key areas of focus have been centred around environmental control – humidity and temperature in particular – to keep the vapour pressure deficit as stable as possible. “One of the main constraints is sticking to a budget,” he adds. Anyone with enough financial resources will likely be able to find a solution – albeit a costly one – but that’s not what they’re trying to achieve. 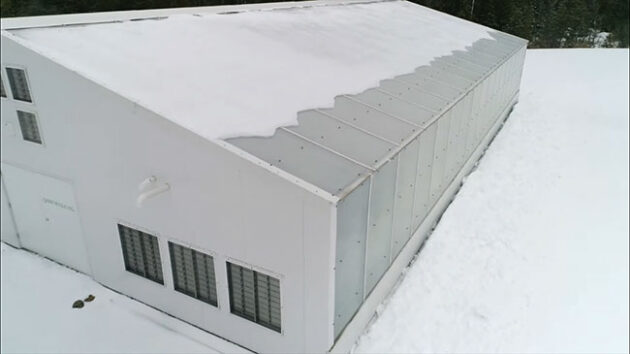 The greenhouse itself was built to maximize retention of the sun’s energy.

“You could have one of these greenhouses on every corner,” says Lyle. His ultimate vision is to create a network of small local greenhouses across Canada, each supplying their own locale like a fast-food chain, but healthier. “It has to be done extremely efficiently. You can’t do it in a big-box greenhouse and pay that kind of money in a town that has 5,000 people.”

One thing he finds is that the carbon footprint created by food distribution is often neglected. “It far outweighs any efficiencies you can create in a greenhouse,” he says. Taking their customer in Almonte, Ont. as an example, his calculations suggest that the trip from his greenhouse to the independent grocer generates 0.7 kg of CO2. In contrast, a one-way trip to the same destination from southern Alberta generates around 3,027 kg of CO2 – over 4,300 times more. “That’s happening day in and day out to billions of grocery stores in Canada and the U.S.”

Not a stranger to numbers, Lyle has a degree in finance from the University of Texas at Austin and worked for a number of large Canadian financial institutions before making the switch to horticulture. Having lived in the Niagara region, he had heard about the high energy costs involved in greenhouse production and decided to take on the challenge.

“The fact that I’m making money out of this is a function of how good the systems really are,” Lyle says, “because I knew nothing about growing lettuce three years ago.”

The operation doesn’t use conventional insecticides or pesticides either, deferring to biocontrols instead. “When we get an overrun of aphids, we shut down and start again when we have to.”

Their efforts to minimize impact to the environment also extend to their packaging, opting for recycled paper rather than clamshell. “We found a cool [product] from Germany that allows us to put the live root in water and send it to the store.” Not only can the water stay in the sleeve for three weeks, the packaging can be dried out and reused again. 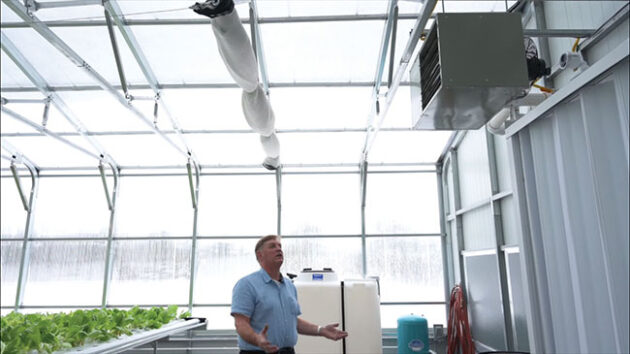 Geoexchange leverages the ground as a battery

As for next steps, there are many. Lyle has already started on preliminary designs for their next facility, estimated at 4,000 sq. ft. and located on the same property. He’d even like to take their electricity off-grid. Now that they’ve had experience with the first build, he’s looking to construct subsequent greenhouses at a lower cost and in higher quantities.

Maumus-Hue is hoping to see even greater gains in greenhouse efficiency. “One of the things we can improve is the control side of [the equipment].” He’d like to add sensors and adjust for light levels in real-time, which will help save on electricity. Another key improvement would be to automate the switch between geothermal and propane. “If you have more sensors, you can measure the difference in temperature [between] the inlet of the geothermal system and the outlet,” he says. “It can tell you if it’s just enough to heat the greenhouse. Once this condition is met, you can then turn your geothermal system on. When the geothermal system does not have enough energy to do so, you can turn on…the propane.” Maumus-Hue says Ceres is in the process of tweaking and exploring this technology as a potential option for future builds. “The algorithms and the rules that you put behind [the technology] can make a big difference,” he adds.

Dreams of establishing a nation-wide network will take some research, based on local demand and population size. In the meantime, Lyle is looking into crowdfunding and financing options to jumpstart his next greenhouse.

“Everything we do [is about] being local, making the food fresh and inexpensive, [and] lowering our carbon footprint,” says Lyle. “If it carries on because we started it, then we’ve accomplished something.”