Features Biocontrols Inputs
Tips on thrips: Management in the greenhouse

Most of the damage caused by this pest is preventable, provided you understand its life cycle. 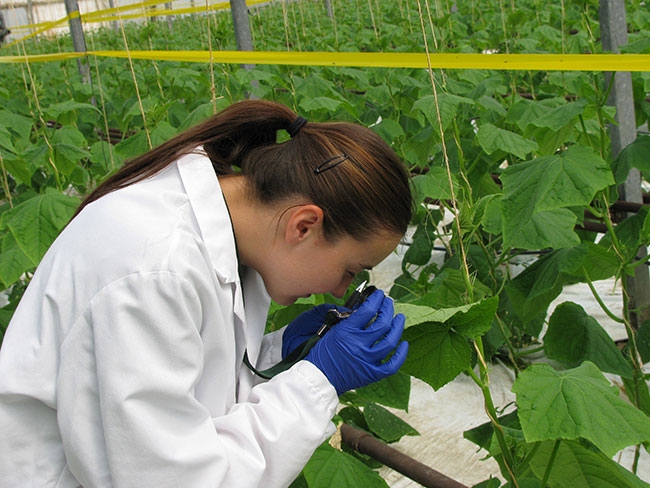 One of the most predictable and chronic pests of greenhouse crops is the western flower thrip.

This thrip species is the main pest found in greenhouses and has been particularly problematic since its introduction to Canada in the 1990s. Factors leading to the establishment of thrips in greenhouse crops include its short generation time, ability to disperse rapidly, resistance to pesticides and production of male offspring without mating. Also contributing to the destructive potential of thrips, as well as that of all other greenhouse pests, is the practice of year-round cropping.

ECONOMIC IMPACT OF THRIPS
Reduced yields due to direct damage: Adults and their young feed by piercing and sucking the contents of plant cells. Fruit damaged by thrips are often distorted, resulting in curling as in the case of cucumbers. Regarding peppers, feeding and scarring under the calyx is often so severe that fruit are unmarketable. In the case of tomatoes, not only can scarring on the fruit occur but there can be dimpling and spotting due to insertion of eggs in the tomato fruit. Thrips therefore cause direct damage by decreasing crop vigour and reducing marketable yields.

Reduced yields due to virus infection: The only known natural means of transmitting the tomato spotted wilt virus (TSWV) is by several species of thrips, including the western flower thrip – which is able to spread it very efficiently.

Although all commonly grown green­house vegetables can become infected with TSWV, it does not appear to spread systemically (i.e. able to spread to other plant parts) in all vegetables. Whereas it spreads systemically in tomatoes and peppers, it does not do so in cucumbers. In fact, studies indicate that at the points of infection, yellow spots develop a few days after inoculation, but no further spread occurs within the plant.

Infection of peppers with TSWV can be particularly devastating if infection occurs early in the life of the crop. This is because not many thrips are needed for infection and virus symptoms are slow to appear.

Often, by the time symptoms are noticed, many plants would already have been infected, and almost all fruits from such infected plants are unmarketable. Total crop loss or almost total crop loss can result in such circumstances.

MANAGEMENT TIPS
The vast number of factors that growers need to consider when managing thrips are sometimes overwhelming. Provided here are a few essential aspects that we believe to be critical in suppressing thrip populations in greenhouse crops.

Anticipate vulnerable life stages: A majority of the damage caused by thrips is preventable, provided the grower has an understanding of the thrip life cycle.

A typical scenario plays out whereby a grower sees an alarming number of thrips feeding on flowers, and after some treatment (whether biological or chemical), the thrips disappear. The grower celebrates, thinking that their treatment worked! But in reality, the thrips have gone to pupate in the soil, and that’s why they have “disappeared”.

The key at this point is to anticipate what happens next. What often occurs is that the grower will continue business as usual, and then suddenly one morning they start seeing thrip adults everywhere in the crop. These adult thrips emerged after spending five days in the soil, and they have already begun laying hundreds of eggs. The window of time from egg to soil-dwelling pupa can be as short as five days in the right conditions.

If the farmer waits until the adult explosion to order swirskii, by the time that swirskii is applied (usually about seven days later) they have missed the window for their biocontrol investment to be the most effective.

In short, recognize the infamous “Thrips Disappearing Act.” At the point that it seems your thrips have “disappeared,” order swirskii. That way, the moment that you see thrip adults in the flowers, you already have the swirskii ready to go. Knowing that swirskii can only feed on the early hatchers (first and second instar larvae), not the pupae, not the eggs, and not the adults, can help you to protect your crop.

Selectively timing the chemical application: When taking out a crop, for example in cucumber greenhouses, a grower will often apply DDVP fogging one to three times. This fogging usually takes care of all thrip stages except the pupae. The reason pupae are not affected is because they are dwelling in the soil, and are protected inside of cracks and crevices. The thrip pupae do not breathe much either, meaning that they take in less of the DDVP than other life stages.

Due to the nature of greenhouse crops, greenhouse thrip populations are found in distinct age groups called broods. The generations will be distinct, all reaching similar stages of the life cycle at approximately the same time. It is much easier to break the cycle if you know how your thrips are cycling. Growers can use this knowledge and apply it in their fogging strategy at the end of a crop.

The dreaded “corner”: Growers often complain that “I have this corner where I always see thrips starting!”

If I have to venture a guess, it would be that the growers are sweeping their plant debris to that corner at the end of the crop. Plant debris often contains thrip larvae and other life stages at the end of a crop. To reduce the potential for thrips returning in your next crop, treat the floor and other surfaces with hydrogen peroxide, which even kills the thrip pupae. Dormant oil can then be used on the bases of all the posts (if not everywhere), and especially in those houses where the debris is being swept.

Timing of release of biological control agents: Orius is an effective biocontrol agent for thrips, particularly in peppers and cucumbers. However, because Orius is sensitive to daylength, we found that it works optimally after mid-March, unless a grower can provide at least 13 hours of light. Our observations in the greenhouse indicate that when Orius is released prior to mid-March, it appears to remain almost immobile, and close to the points of release. Generally, Orius is a very effective biological control agent from April to September.

Plant inspection for early detection: Early detection of thrips in a crop depends on which plant part is inspected. For example, inspection of flowers is one of the simplest and fastest ways to check for the presence of thrips and their population increase in cucumbers and peppers. However, in tomatoes, initial thrip infestations tend to occur on the lower leaves. So the lower canopy of a tomato crop, and not flowers, is where attention should be focused.

Interpreting sticky card numbers: Numbers of thrips observed on sticky cards may not necessarily reflect actual thrip damage on a crop or the growth of a thrip population within a greenhouse. Rather, a sudden surge in thrip numbers on sticky cards could be the result of thrips migrating from outdoors into the greenhouse. During spring and summer, when outdoor vegetation is disturbed, such as during the mowing of grass, cutting down of weeds, and harvesting of crops, thrips are disturbed and migrate in huge numbers, particularly during windy days, into greenhouses.

Plant pruning can affect biocontrols: Pruning and removal of young shoots is necessary in many greenhouse crops. Such pruning can drastically prevent a biocontrol agent that lays its eggs in these plant parts from effectively increasing its numbers. For example both Orius and predatory mites lay their eggs in the growing points or succulent young shoots of some crops such as cucumbers and peppers. Frequent removal of young shoots in these crops will be counter-productive to the establishment of these predators.

Plant pruning can affect pest levels: In tomato crops, removal of heavily infested lower leaves can quickly reduce thrip population levels. However, if such leaves are left on the floor of the greenhouse, this will facilitate completion of the thrip life cycle and an increase in their population levels.

Temperature conditions and choice of predators: Predatory mites used for biocontrol of thrips are very similar in appearance and predation activity. Despite the seeming similarity, these predators perform optimally at different temperatures.

Consider the two predatory mites commonly used for thrip suppression: cucumeris (N. cucumeris) and swirskii A. swirskii). Swirskii has a higher optimal temperature for development than cucumeris and therefore performs better than cucumeris during summer. Indeed, small- scale greenhouse trials done by Canadian researchers in ornamentals showed that overall, swirskii performed better in the summer, and equally well or better under winter conditions, but they considered cucumeris to be a more cost-effective biocontrol agent for winter months.

Use of multiple biologicals for improved pupae control: The pupal stage of thrips often resides on the ground, and because they tend to be hidden either in debris or under ground cover, it is a much more difficult target to reach. Laboratory studies indicate that when soil predators, including the rove beetle (Dalotia coriaria), predatory mites (Stratiolaelaps scimitus and Gaeolaelaps gillespiei) are combined with entomopathogenic fungi (i.e. fungi capable of causing disease in insects) such as Metarhizium anisopliae strain F52, Beauveria bassiana GHA strain, and the nematode, Steinernema feltiae, against thrip pupae, much more kill (more than 90 per cent) was achieved when the predators and fungi were applied combined than when they were used separately. Even though the same effect was not observed with the nematode in these studies, other research in Ontario and Europe have shown them to be effective in controlling thrip pupae when applied to the growing medium on a weekly basis.

Dr. M. Ishtiaq Rao, CEO of Crop Defenders Ltd., has a PhD in entomology and is dedicated to the eradication of horticultural pests through IPM methods. Crop Defenders Ltd. utilizes biological knowledge of pest and beneficial insect species in order to manage pests cost effectively and in a way that is cohesive with a healthy environment. • ishtiaq@cropdefenders.com.


Related
How to Use Non-Crop Plants in Your Thrips IPM Programs
Finding balance: lighting, energy and microclimate
IPM update: 1001 ways to use predatory mites
Making the most of your predatory mites

1 Comment » for Tips on thrips: Management in the greenhouse