Features Lighting Structures & Equipment
Suntech lives up to its name

This ambitious medium-sized operation is learning many lessons about year-round production. 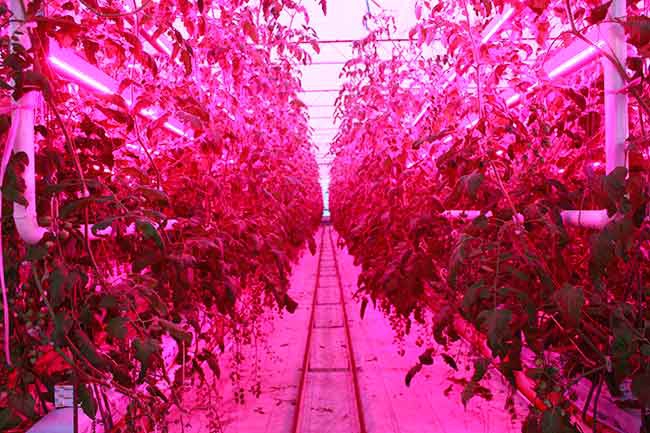 October 2016 – It was at the age of 44 that Bob Mitchell decided he wanted to try greenhouse cultivation.

“I decided to make a switch in my agricultural career after being in charge of my grain elevator as well as growing cash crops,” he says. “I’ve been in love with agriculture since I was a toddler, so I decided it was time to dedicate my time to intensive agriculture – growing quality greenhouse vegetables.”

Mitchell is the co-owner of SunTech Greenhouses in Manotick in eastern Ontario with his wife Carmen. It’s a four-acre operation that started in 1999 with 1.5 acres.

SunTech gets its pride, Mitchell says, from “producing tomatoes that taste like tomatoes,” according to a lot of faithful customers.

With time and a lot of hard work, SunTech built its brand and grew its reputation. Expansion and diversifying into more tomato varieties, cucumbers and green beans helped them stay in the black.

It was late summer competition that made Mitchell look into winter production. “With year-round production, we’d have an alternative to battling the late-season market flood of foreign, field and garden tomatoes every year,” he explains.

“Our feasibility study gave us positive direction on the installation of high pressure sodium grow lights, but our supplier suggested we look at LEDs. HPS mimic sunlight the best, but their energy cost (for us) is beyond feasible.”

The LED manufacturer provided research done in Japan as a reference point (a latitude similar to Los Angeles), but that was basically all Bob and Carmen had to go on.

“We didn’t realize we were entering unknown territory,” Mitchell remembers. “We were told our blue and red LEDs were the right lamps for winter beefsteak high-quality tomato production, so we finished installing them in January 2015.”

The lights covered about 1.7 acres of tomato plants, for a little over $1.1 million.

COMMITTED TO LEARNING
Mitchell now knows much more than when he started about how the nutrient mix, temperature routines, irrigation timing and irrigation volumes have to be changed when using LEDs. Indeed, he found that cherry, grape and beefsteak plants had a different response to the same lighting regimen, which he speculates is related to nutrient use capability.

Mitchell had to adjust his nutrient recipe not only according to the plant’s health and production performance, which varied according to variety, but also according to the age of the plants and the “pretended” time of the year (with grow lights trying to mimic summer).

Beefsteak tomatoes presented more problems than the other types, edema being one of them.

“Whether or not that’s a light effect, is still debatable and will be subjected to further tests,” Mitchell says. “Grape tomatoes were healthier, but the product size shrunk. Cherry tomatoes performed OK.”

To help understand nutrient use details, Mitchell did leachate analysis, but it only provided an indirect picture. He added leaf tissue analysis to nail down exactly which nutrients the plants were lacking or using up too quickly, and was therefore able to carefully adjust fertilizer to improve deficiencies and correct excesses (one of the surprises picked up by the tissue analysis was that some plants were absorbing certain nutrients to toxic levels).

“After adjusting, we saw recovery in the plants’ health, especially when the days started to get longer and the plants received more natural light,” he says. “But having being that ill, not all plants were able to recover so we decided to replace them with new ones this April.”

In terms of different light colour wavelengths, Mitchell says he’s learned a great deal, but points out that the science of how specific tomato varieties utilize them is only in its infancy. And as far as his conclusions about when to turn LEDs on and off throughout the winter, all Mitchell is prepared to say at this point is that he believes seven hours of darkness are required.

WORKING WITH U OF GUELPH RESEARCH TEAM
Dr. Mike Dixon is a professor and the director of the Controlled Environment Systems Research Facility at the University of Guelph – an expert on greenhouse production in harsh environments who has been in touch with Mitchell since June 2015.

Dixon has described SunTech’s activities with winter LEDs as a commercial-scale field trial of some of the space program research he and his colleagues are working on.

Dixon believes the most significant lesson discovered at SunTech so far is how the nutrient mix needs to change with using LEDs.

“Corollary research at universities also shows this very clearly, that changing the light means you have to change nutrient combination,” he notes.

“It’s already been shown in other plants like basil. The biochemistry of a plant is affected, in terms of overall performance, taste compounds, colour, nutrients and medicinal compounds (consider cannabis and cancer treatment drugs).”

Any future research will have to wait, however, as SunTech is taking a year off from using the lights.

“There are two reasons for that,” Mitchell says. “The first is insect control. I need a total cleanout, because only absolute perfection in production would cover the electricity costs. The second reason is that we are installing a combined-heat-and-power generator, which will make winter production really feasible.

“But even with taking a year off, our ultimate goal remains to have the entire greenhouse successfully producing from November to August!”

Mitchell is determined to keep learning and to share what he’s learned with others. One thing that has continued to motivate him is the attitude of neighbours.

“The LEDs release a nice fuchsia glow, which many people around just love to see every winter morning while they go to their jobs,” he notes.

For his part, Dixon affirms that “there is lots of interest” in the controlled environment agriculture sector.

“We are discovering that we can affect a plant as much with environmental modification as we can with genetic modification, but we have to keep up with advances so people don’t get it wrong.”