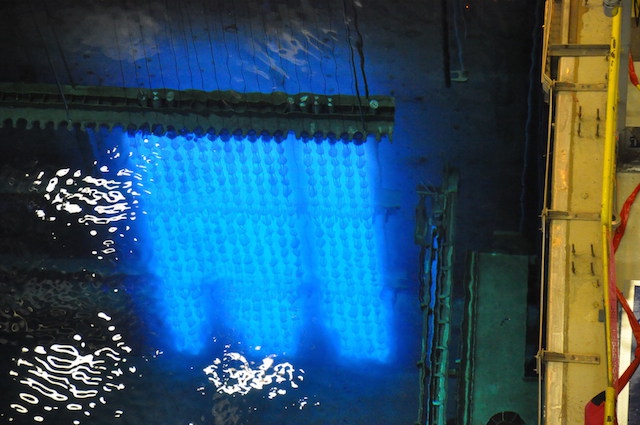 Cobalt-60 is an isotope that emits gamma rays essential to the medical community for cancer treatments and the sterilization of medical devices, while it also helps to prevent the spread of disease through an innovative insect sterilization technique. Cobalt-60 emits a blue glow called the Cherenkov effect when removed from a nuclear reactor and placed in water, which protects the surface from its radioactivity. The Cobalt rods spend up to two years in Bruce Power’s nuclear reactors. (CNW Group/Bruce Power)

The researchers hope to control pepper weevils, which can burrow into farmed peppers and destroy them from the inside.

“It is very difficult to control these insects when they are hidden inside the pepper,” Scott-Dupree said.

According to the Ontario Greenhouse Vegetable Growers, pepper weevils ruined $83 million worth of crops in 2016 – a figure that does not include the costs of management, suppression initiatives or cleanup of the pest.

Cobalt-60, which is produced in four of Bruce Power’s eight nuclear reactors, is used for the Sterile Insect Technique (SIT), which could be a powerful strategy for controlling the weevil, said Scott-Dupree, of the U of G’s School of Environmental Sciences.

“We want to move away from insecticide as much as possible, and SIT provides us another tool in our pest management toolbox,” she said.

“It fits well with biological control programs that growers already have established in their greenhouses. While no strategy is 100 per cent effective, using nuclear energy to sterilize insects is an environmentally friendly method of controlling these pests.

“There is no danger of the pepper weevils spreading any radiation following sterilization, so it is also safe for people.”

Scott-Dupree, the Bayer CropScience chair in Sustainable Pest Management at U of G, will send pepper weevils to Nordion, an Ottawa-based supplier of medical isotopes and gamma technologies, which receives its Cobalt-60 from Bruce Power. Gamma radiation from Cobalt-60 will sterilize the insects before they are released to mate normal, unsterilized pepper weevils in greenhouses.

“We will only release pepper weevils that have all the attributes of normal, unsterilized weevils, except that they are sterile,” said Scott-Dupree. “When they mate, the eggs will not be viable, no progeny results and the pest population will decrease.”

Families and businesses in Ontario rely on low-cost nuclear for 60 per cent of their electricity each year, said Ontario’s Minister of Energy Glenn Thibeault, who visited Nordion lab facilities in Ottawa this week.

The Long-Term Energy Plan recognizes the far-reaching benefits of nuclear energy, whether through low-cost, carbon-free power, jobs, economic benefit, clean air, health care and, as is the case with this collaboration, agriculture.

Pioneered in the 1950s, SIT has been successfully used to control the codling moth, a pest of apples, in the Okanagan Valley in B.C. since 1992.

Scott-Dupree has also recently conducted research that has found that SIT has potential to control American serpentine leafminer, an insect pest that feeds primarily on chrysanthemums.

“This innovative research could improve Ontario’s agricultural sector by reducing the impact of pests on produce, while also providing a possible gateway to the future of farming,” said Mike Rencheck, Bruce Power’s president and CEO.

Scott-Dupree and her team plan to determine the optimum radiation dosage that ensures the sterilization of pepper weevils before testing SIT releases in greenhouses.

BENEFITS FOR FARMERS, ECONOMY AND ENVIRONMENT

“The study will take some time, but the potential it has makes it worthwhile,” she said.  “It is exciting to think of all the benefits this study could mean for farmers, Ontario’s economy and the environment.”

Nordion’s facilities will be used to sterilize the pepper weevils.

“We are excited to see a technology like SIT, which has had wide and successful application in other areas of the world, help us here in Ontario,” said Ian Downie, vice-president of Gamma Technologies at Nordion. “Our partnership with Bruce Power helps us support these kinds of scientific advances using Cobalt-60.”