Features
Rugose detection in the palm of your hand 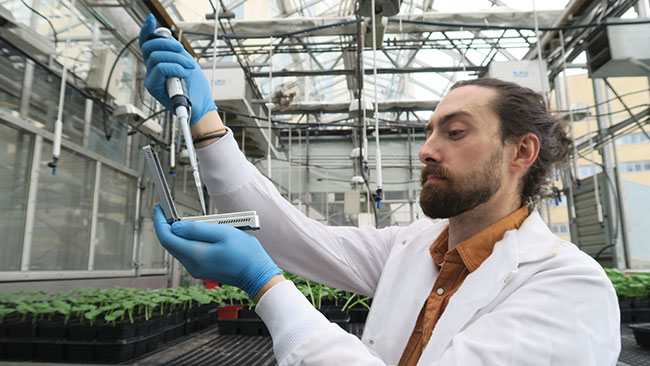 When it comes to greenhouse viruses, the first and main line of defence often comes down to sanitation and thorough cleanouts between crops. This is particularly true for the tomato brown rugose fruit virus (ToBRFV), which is still relatively new on the scene. But how can producers verify whether their sanitation program has worked?

“Testing surfaces is potentially challenging,” says Dr. Geneviève Marchand, plant pathologist at Agriculture and Agri-Food Canada. Many of the laboratory techniques being used to confirm ToBRFV were primarily developed for testing plant samples.

Currently, a grower who suspects ToBRFV in their crop would first submit plant samples to a local lab for a PCR test, explains Niki Bennett, science coordinator at Ontario Greenhouse Vegetable Growers (OGVG). If results are positive, the lab follows up with a bioassay to test for infectivity and/or sequences the sample to confirm the identity of the virus.

Because greenhouse surfaces are expected to contain very low or trace levels of the virus compared to infected tissue, this could pose a problem, particularly as questions existed around the accuracy and sensitivity of these analytical techniques at the time.

“We used to have 20 years from the first we heard about [a pathogen] to it becoming prevalent, so you had time to develop and validate these tests,” Marchand explains. Because ToBRFV spread so quickly around the world since it was first reported in 2014, many labs have had to adapt these techniques to the virus within a short period of time and with limited knowledge of the virus. None had been specifically geared towards testing surfaces.

Rémi Maglione of Harvest Genomics thinks they may have a viable solution.

Grown out of Guelph, Ont., the company has developed a proprietary method for sampling and detecting ToBRFV. In addition to testing plant tissue, it can use swabs to collect samples off of greenhouse surfaces, then run them through a portable genetic sequencing device made by Oxford Nanopore, a British manufacturer.

“It’s smaller than a cell phone,” says Maglione, who first started using the technology during his PhD studies. “You can analyze the DNA from any source, anywhere.” The technology reads out the order of building blocks that make up the DNA molecule, and this sequence is different for each organism. Nanopore’s handheld devices have only emerged on the market in the past five to six years and have largely been used by researchers in field conditions ranging from the Amazon to the Arctic. Harvest Genomics is one of the first to apply the devices to commercial use.

The process of genetic sequencing is not a new method, but it no longer requires large bulky machines to run, explains Marchand. “Over the last few decades, that technology has shrunk in size.” Whereas before, it was used as a research tool to characterize the DNA of any given organism in the lab, the instruments have now become more portable, cheaper, and faster, to the point where they can be used as a diagnostic tool in the field.

Earlier this year, OGVG partnered with Harvest Genomics to run a proof-of-concept test, with consultation from Marchand as well as Cara McCreary, greenhouse vegetable IPM specialist at the Ontario Ministry of Agriculture, Food and Rural Affairs. They amassed a hundred samples collected from a multitude of greenhouse surfaces that may have come into contact with plant materials or employees’ hands. Separated into two batches, pre- and post-cleanout, they arbitrarily assigned numbers to the samples and conducted the analysis blind to remove any potential bias.

“It turned out that the first batch was pre-cleanout of the greenhouse, so the vast majority of the samples were contaminated by the rugose virus,” says Maglione. “The second batch was post-cleanout, so many of the surfaces were free from the virus.” At one point, he thought the technology was malfunctioning because of how well the greenhouse had been disinfected.

The tests also revealed some interesting results. “It was all the high-touch surfaces that were heavily contaminated, and even some high-touch surfaces outside the production area,” says Bennett. Among their samples, they also detected the virus on the office computer and desk stationed closest to the production area, speaking to its high transmissibility and persistence. 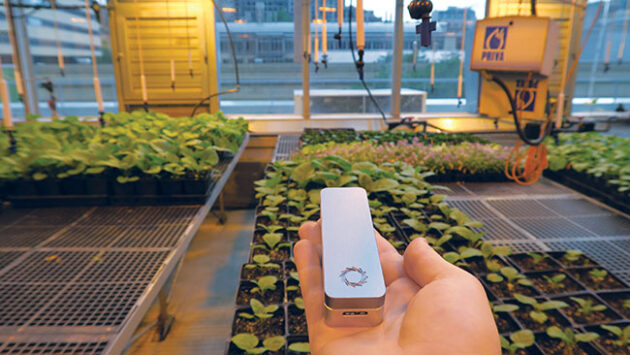 Marchand was pleasantly surprised to see that they were able to generate readings for the majority of the samples. “That told us the method was sensitive enough to work with even the low amount that may have been present on some surfaces.”

What’s more, Harvest Genomics was able to point out the positive controls, which were samples purposely spiked with ToBRFV to validate the method. They also correctly identified a sample of the closely related pepino mosaic virus. “They were 100 per cent accurate,” says Bennett. “It gave us a lot of confidence in their system.”

What sets this method apart from tests used by most commercial labs is the sensitivity and specificity of the method.

PCR tailors its analysis to target a small, specific portion of a pathogen’s DNA, then makes copies of that piece until it can be detected, making the technique quite sensitive. This problem is in finding a sequence unique to ToBRFV.

“The underlying problem behind that is we have not sequenced the entire world,” Marchand points out. “So it is theoretically possible that there is something out there that happens to share a sequence to a degree, the sequence that is targeted by the test.” In which case, a grower might receive a false positive in their test results.

Comparatively, the process of sequencing identifies all of the genetic sequences captured in the sample, including plants, pathogens, and other microbes. Users then wade through the data, looking for that specific segment from the pathogen of interest.

Maglione likens it to a forensic fingerprint. “When you are on the scene of a crime, you take all the DNA and you [look for] hits in the database. You’re sure you’ll find the guy because we all have unique signatures from our DNA. And it’s the same for all organisms on Earth.”

Adding to the advantages were ease of use and fast turnaround times.

“Sample taking is often something that is difficult,” says Bennett. It’s not only about getting the right number of samples but ensuring their quality as well. As Maglione explains, the swabs help make the process more user-friendly, mitigating issues of plant tissue degradation and helping to ensure quality. They’ve further lowered potential barriers by creating a sampling kit filled with specialized sterile swabs and tubes – items that have become more difficult to come by since COVID.

Price-wise, growers who go through commercial laboratory services pay an average of $100 per sample for PCR. The follow-up bioassay is less expensive but takes time, while the more accurate lab sequencing option costs around $1,000 each. The Canadian Food Inspection Agency offers a free sequencing test, but there is some apprehension around using this service. All in all, Bennett estimates it could take anywhere from three to 10 days through mainstream testing channels, depending on the lab’s available tools and services.

In comparison, Harvest Genomics can turn around results in two days. Costs run between $120 to $150 per sample, but that could be lower with high enough volumes.

Since deploying the service in February this year, Maglione says they’ve performed 500 tests for ToBRFV and are projected to close the year with 1,000 tests, if not more.

For now, interested growers will need to send their swabs to Harvest Genomics in Guelph, but the team is looking to bring their services out to growers before the end of the year.

With the fast turnaround, their services could also serve as confirmation for another quick test in the greenhouse, such as the AgDia immunostrip tests, says Bennett. Because of the lower costs, she feels they could be more easily incorporated into a regular testing protocol. “Testing should be one of the first efforts, not one of the last.”

Even if a PCR test comes back negative, Marchand says there’s a lot of uncertainty around a single test result. “That could mean the pathogen was not there, but it could also mean the test didn’t work, [or] there wasn’t enough of the pathogen present for the test to pick it up.”

Eventually, this type of portable sequencing technology could be handled by greenhouse consultants or in-house specialists at greenhouse operations. “We’re not there yet, but maybe it’s becoming more realistic every day,” says Marchand.

In the meantime, there are a multitude of applications for this technology.

Maglione has brought it with him to Montréal, Que., where he’s working with cannabis growers to characterize pathogens in the air of their growing facilities. “The core of this technology can also monitor pathogens unknown to producers. This is called biosurveillance,” he says. This project could eventually drive the development of biosensors that detect the presence of microorganisms in the air, alerting the grower before symptoms appear.

Other potential applications for the technology include soil sampling, seed testing, and food safety. Breeders can also use it to identify differences in genetic code and their corresponding traits in new varieties. One of the first services developed by Harvest Genetics was a test for herbicide-resistant weeds.

“I see this as the beginning step for a novel way of looking at IPM and using genomic solutions in a way I hadn’t thought of before,” says Bennett. “I think our whole sector is going to be eager to see what their next steps are going to be.”

When dealing with viruses, there are limited options for greenhouses.

“In the case of the rugose virus, there’s nothing you can spray on your crop to protect your plant or cure them once they’re infected,” says Dr. Geneviève Marchand. Differing from fungal and bacterial pathogens or insect pests, the main tactics against viruses are to keep them out of the greenhouse and use resistant varieties where possible.

The plant pathologist at AAFC used to bluntly tell growers “keep it out, or rip it out.” As ToBRFV overcame previously bred resistance genes against other Tobamoviruses, vegetable breeders have been trialing new genetics against the virus since.

“If we had something like a vaccine that could be applied to the plant preventively, that could be one way to go about it,” says Marchand, who is giving a talk about this very topic at the Canadian Greenhouse Conference. “Plants have a very different immune system than ours, but it’s the same idea. By exposing the plant to something, it becomes known to them. They do have some form of immune memory [such] that when they encounter the pathogen again, they’re able to mobilize their defense reactions a lot more quickly and hopefully keep it out.”

“It’s a fascinating topic and it’s not an approach that’s been exploited a lot historically in plant pathology,” she adds. It could be a gamechanger for something like viruses where there are so few options for preventative or curative measures.

In the meantime, she says, that’s why producers need reliable testing methods.

Catch Dr. Geneviève Marchand’s talk on plant vaccines at the CGC on Oct. 6. 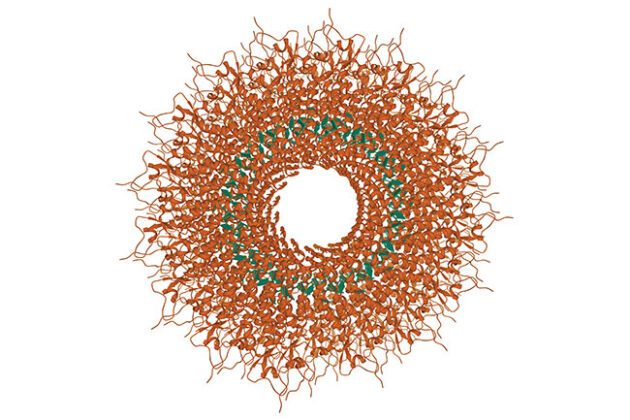