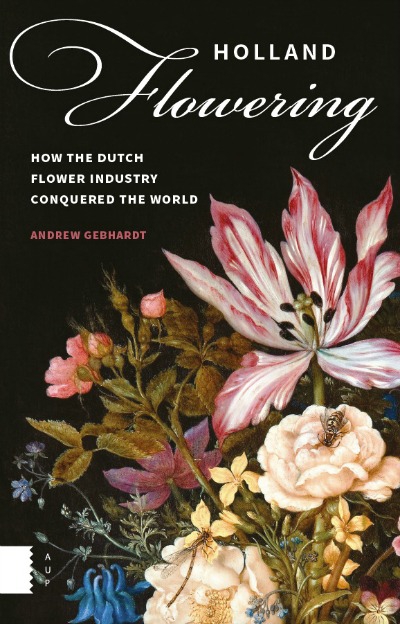 Nov. 26, 2014, Amsterdam – Holland Flowering: How the Dutch Flower Industry Conquered the World is a new release from Amsterdam University Press.

This compelling book investigates the history, global impact and cultural aspects of horticulture in Dutch national policies and outlook since the industry’s spectacular rise during the Dutch Golden Age.

Since the 1630s Tulip Fever, flowers have become a lucrative commodity throughout the world. Horticulture, a major energy consumer, epitomizes both the problems and the possibilities in the ways the industry grows, sells and distributes resources and commodities.

Dutch flowers also crop up in prominent contemporary political controversies, from the Israel-Palestine conflict to the land grab in East Africa.

A thought-provoking study, this book will delight all readers interested in horticulture in general, the Dutch Golden Age and the rise of the humble tulip and rose to a global commodity.

“Andrew Gebhardt approaches that mysterious, compelling beauty, the tulip, through a varied and revealing set of lenses. An eye-opening, expansive book.” (Mark Doty, author of Still Life with Oysters and Lemon, and winner of the National Boook Award, the T.S. Eliot Prize, and the Los Angeles Times Book Prize)

“Fluidly written, deeply researched, and full of surprising turns, this book is about so much more than flowers. Highly recommended.” (Dr. Christopher Ryan, co-author of New York Times best seller Sex at Dawn.)

Andrew Gebhardt completed his PhD at the University of Amsterdam. He also holds an MA in journalism and a MFA in creative writing. He has been awarded grants and fellowships from the New York Times Foundation and the Fulbright Commission. He has published poetry, essays and translations.