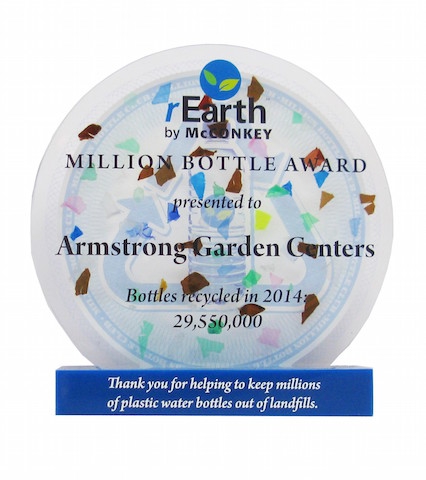 Sept. 22, 2015, Sumner, WA – The Million Bottle Club has announced its 2015 recipients, recognizing growers who have recycled more than one million plastic water bottles into plant containers.

This is the third year the Million Bottle Club, organized by McConkey’s rEarth™ plastic water bottle recycling program, has bestowed awards on growers.

“Million Bottle Club honorees can take pride in keeping bottles out of streets, landfills and oceans,” said Dave Edenfield, business development manager for McConkey. “And they’re doing this simply by following their own green production practices, including growing in 100 per cent recycled, curbside-recyclable rEarth containers.”

With only one in four plastic bottles recycled and 60 million bottles going into landfills daily, growers can make a significant environmental impact by using products like rEarth and diverting bottles into recyclable containers.

Membership in the Million Bottle Club continues to expand. This year’s honorees recycled more than 66 million bottles in 2015 alone:

Based on the cumulative number of bottles recycled since the grower began using rEarth, the Million Bottle Awards are announced annually. “With the Million Bottle Club growing every year, we have many multi-year members,” said Dave, “and even more very close to their first award for recycling a million bottles. We look forward to welcoming even more next year.”

The rEarth line is manufactured by McConkey Company, a leading producer and distributor of horticultural goods, with locations in Sumner, Washington, and Garden Grove, California.