The rEarth containers from recycled plastic bottles are continuing to attract considerable attention. 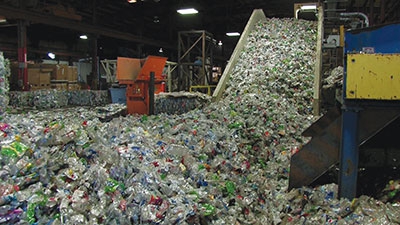 Nov. 28, 2014, Surrey, B.C. — As sustainability increasingly takes centre stage and consumers seek out more responsible choices in all aspects of their lives, growers are in turn exploring options in their production.

“The material was getting thinner and thinner, and there were problems with the insert. It was very thin and wouldn’t hold up; it would fall apart. We tried offshore products too, and we had problems there with shipping and getting supply.”

Then the company found rPET (recycled polyethylene terephthalate). U.S.-based manufacturer McConkey was using rPET made from recycled water bottles to make rEarth™, a line of containers that are not only recycled but also curbside recyclable in many locales.

Hong’s tried the rEarth 606 inserts, and the rest, as they say, is history. Switching to rEarth resulted in no downtime for production, says Hong, and because the products are cost-neutral to traditional plastics, there was no impact to the bottom line.

The Club, organized by McConkey’s rEarth plastic water bottle recycling program, is based on the cumulative number of bottles recycled since the grower began using rEarth. It recognizes growers who have recycled more than one million plastic water bottles into plant containers.

“Choosing a 100 per cent recycled, curbside-recyclable grow container made from water bottles is a positive impact on the environment that’s easy to make,” says Dave Edenfield, business development manager for McConkey, “and growers are often surprised at how much impact their purchases are having.”

ONLY ONE IN FOUR PLASTIC WATER BOTTLES IS RECYCLED
Though plastic bottles go into landfills and litter at the rate of 60 million units every day, only one in four are recycled. Growers like Hong’s Nursery and Mission, B.C.’s Sidhu & Sons, another Canadian Million Bottle Club member, make a significant impact by using products like rEarth, which help the environment by diverting bottles away from landfills and re-forming them into curbside recyclable grower containers.

Because rEarth products are #1 recyclable, they can go into any recycle bin. To help raise awareness among gardeners, McConkey provides point-of-purchase banners, signs and posters that can be customized with the garden centre’s logos. Hong’s Nursery distributed the materials to their customers, and said they help communicate the message.

Many of these growers’ customers are companies for whom a green message is very important, making finding sustainable inputs even more crucial.

With about a 1:1 ratio – one 16.9-ounce water bottle to make one rEarth 4.3-inch round pot – and the rEarth process using 60 per cent less energy than producing containers from virgin plastic, they can feel good about their container choice.

“Because rEarth is recyclable and made from recyclable materials, it gave a better message to our consumers,” says Hong.

“And the containers have the recyclable symbol on them, so you can put them in your recycle bin.”

‘IT MADE US REALIZE HOW MUCH  DIFFERENCE WE WERE MAKING’
Being part of the Million Bottle Club also helps highlight the greenhouses’ efforts, he says.

“It made us realize how much difference we were making – a million bottles is quite a bit. Knowing we’ve taken over a million water bottles out of landfills gives you a good feeling.”

As awareness of rPET and rEarth increase, adoption rates are quickly rising – the Million Bottle Club has more than doubled in size since its inception. McConkey has added a second rEarth production line and continues to expand the line in response to demand for new sizes. They’re on track to recycle nearly 100 million a year at their Garden Grove, California, manufacturing plant.

And Hong’s Nursery? “We’d like to expand to more rEarth,” says Hong. “I believe it’s a proven product.”

Joli A. Hohenstein is marketing and PR specialist for Pen & Petal, Inc., a marketing, advertising and public relations agency for the green industry.