Research in Europe shines a light on possibilities for Canada 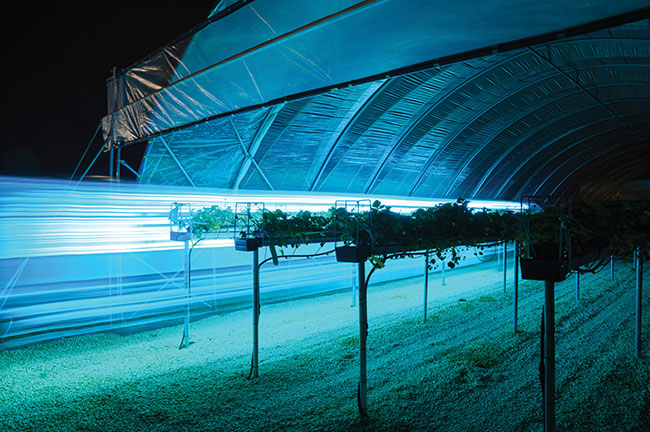 Ultraviolet light from the sun is widely recognized in field production as one of the best natural controls for mildew that exists. Many growers who face the issue open up the canopy of their plants to facilitate light penetration as well as air circulation to keep moisture levels low.

For greenhouses, light exposure is one of many variables that growers actively manage. While plant development is the usual target when manipulating this variable, Norwegian scientist Aruppillai Suthaparan has been studying the potential of certain wavelengths of light to manage disease.

“It’s not always easy to prevent pathogen entry into our crop production systems,” said Suthaparan, a researcher in the Faculty of Biosciences at the Norwegian University of Life Sciences (NMBU) in Ås, Norway.

Chemicals have been the primary way for managing disease, but there are increasing concerns about their environmental and human health impacts. Resistance is also a concern. Powdery mildew, a particular focus of Suthaparan’s work, is a case in point. “The use of the fungicides against powdery mildew is not a sustainable solution because these pathogens always develop fungicide-resistant isolates so they can tolerate and survive,” he said. “So most of the fungicides that are available in the market right now are very, very inefficient against fungal diseases, including powdery mildew.”

This is where the use of optical radiation is attracting interest among researchers and growers. Specific segments of the spectrum – ultraviolet, visible and infrared regions – all have different effects on the plant. A difference in light quality (wavelength) and quantity (intensity and duration) perceived by the plant will affect photosynthesis, development and photoperiodism.

For fungi, optical radiation influences its developmental behaviour along with its relationship with the plant host. Finding the right spectrum of light, the right length of exposure and the right time of day becomes important. The right mix has been a focus of Suthaparan’s research, the results of which he discussed with growers at the Lower Mainland Horticultural Improvement Association virtual short course earlier this year.

Since light exposure has a cleansing effect, the first step was to see if day length made a difference to disease rates. Tomatoes and roses were subjected to four different day lengths, and the incidence of powdery mildew was lowest among those exposed to continuous lighting. But most plants don’t want continuous lighting, which also boosts energy costs. Suthaparan’s team therefore started looking at different wavelengths to see if they could be effective. The target pathogen was Oidium neolycopersici, which causes powdery mildew in tomatoes.

Researchers first tested the effect of various spectra of optical radiation. Within the tested ultraviolet (UV) range, wavelengths from 250-290 nm were found to suppress all powdery mildew. In the visible range (400-750 nm), red light achieved the most effective control. But red light also resulted in plants that appeared highly stressed, suggesting that red light wasn’t sufficient by itself. While blue light could deliver healthier-looking plants, it had no significant effect on powdery mildew alone. “However, [a] combination of red and blue light with red light proportion ≥50% showed significant suppression of powdery mildew with compact tomato plants [in a] controlled environment experiment,” he said, based on unpublished data. 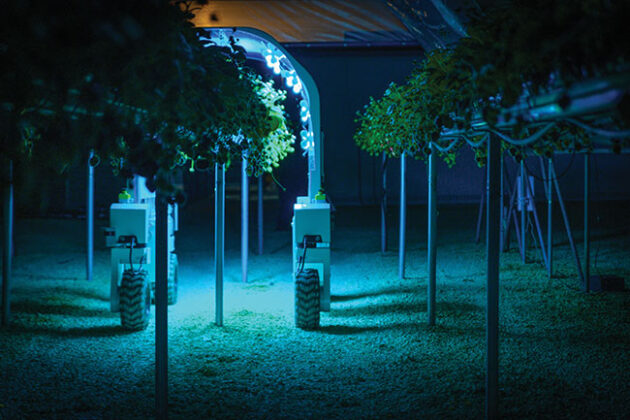 Pictured here is Thorvald by Saga Robotics. The company has been collaborating with researchers, including Aruppillai Suthaparan’s team at the Norwegian University of Life Sciences as well as Cornell University in the U.S., among others.
Photo credit: Saga Robotics, K. Skarsgård

This prompted a look into combinations of wavelengths, including blue light and UV, to see if powdery mildew control was possible while still giving plants exposure to a healthy range of light. The trials indicated that a longer dose, up to four minutes of short wavelength UV between 254-284 nm, was most effective when used simultaneously with red or green light. “You have very, very efficient suppression of disease,” Suthaparan said.

While glazing materials, shading, lighting and other tools in modern greenhouses and vertical farms can change the spectrum of optical radiation that plants receive, this is more difficult in traditional greenhouses, high tunnels or field settings. This fact led researchers to look at timing. Trials indicated that exposing the plants to UV light at night, when they’re able to avoid exposure to other hindering forms of light for at least four hours, and ideally six to eight hours, was key.

“UV-A, blue and infrared minimize the disease suppressive effect of short wavelength UV and red,” Suthaparan explained. “If you have UV treatment, you need to have a certain lapse time before the next perception of UV-A and blue light.”

The more regular the treatment, the better the suppression of disease. Ideally, growers should treat plants on alternate days as a way to mitigate disease. Since other frequencies of light can affect other pathogens, the light treatments can be delivered in rotation. Blue and orange-red (600-660 nm), for example, can be efficient against gray mold.

Suthaparan tested the use of optical radiation against powdery mildew in a variety of settings, including cropping systems for strawberries, tomatoes, asters, rosemary and cucumber. “In all the cases you could see very clear disease suppression,” he said.

But deploying the technology at a large scale is a challenge. Since greenhouses employ cropping systems tailored to the specific crop being produced, the system for dosing the plants with light also needs to be customized to ensure thorough coverage and effective disease suppression.

“You can use optical radiation in the control of diseases, but you have to design it properly, considering the kind of crop production system, other environmental conditions conducive to disease, and the level of disease pressure you have,” Suthaparan explained.

Working with Saga Robotics, a Norwegian company that makes the autonomous Thorvald platform for field and polytunnel environments, the supplier is rolling out with claims that it’s 80 to 95 per cent effective against powdery mildew. 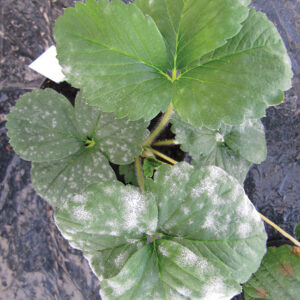 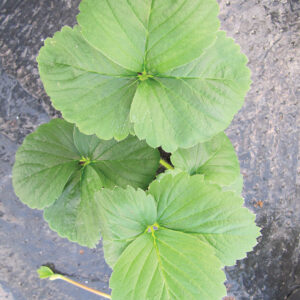 Compared to another that was treated with a short dose of UV [right]. Photo credit: A. Suthaparan

“But still there are some challenges,” Suthaparan said, noting that indoor and outdoor environments will result in different levels of control. Sensors need to be calibrated properly, to ensure that optical radiation is being applied effectively. Disease pressure also has to be taken into account, so that plants aren’t being dosed needlessly.

With ongoing research projects funded by the National Research Council of Norway, Suthaparan and his team are working on a system that can automatically detect the presence of pathogens and quantify the pathogen inoculum in the production system. It will send an alert regarding the risk of a disease outbreak based on environmental conditions.

“[It] has sensors that will log environmental data [and be] combined together with disease modelling so we can treat the plants selectively, wherever we have disease pressure,” he says. Their other collaborative projects will work on exploiting plant genetic resources to prime the plant’s immune system by treating them with selective wavelengths of optical radiation.

Thorvald is distributed in the U.S., U.K., Italy and Norway through their farming-as-a-service (FaaS) model. “No capital investment for early customers is required, and maintenance costs are included, meaning low risk and high flexibility for the grower,” says Pål Johan From, CEO at Saga Robotics. “Light treatment is offered through the season as a complete service with field mapping, treatment deployment and maintenance performed by us.” Partnering with Cornell University in the U.S., Saga has completed trials for greenhouse crops, but is currently focusing their commercial start-up efforts on strawberries and grapevines.

While crop monitoring systems have been developed in Canada with a view to help growers stay on top of disease, the targeted use of optical radiation to control and suppress disease has yet to attract significant research or investment here, at least of those that are publicly divulged.

Dr. Geneviève Marchand, plant pathologist at Agriculture and Agri-food Canada’s Harrow Research and Development Centre, said the use of optical radiation to control disease “is certainly a promising area for research.” Structured trials have yet to be undertaken, however, meaning researchers have circumstantial evidence and observations on what could be possible.

“The relationship between plants, lights, and pathogens is a complex system,” she says.

In addition to the direct effects of light on the plant, the pathogen and the relationship between the plant and the pathogen, there may be indirect effects depending on the kind of light used. This shouldn’t discourage researchers from exploring what will work best for growers in Canada, but it does mean there is plenty of work to be done.

“There is enough to keep researchers busy for a very long time,” she says.

Editor’s note: A 2019 article by Cornell University noted that eight years prior to writing, Suthaparan’s team had discovered that the powdery mildew fungus shuts down its innate system for repairing damage caused by UV light at night. A nighttime dose of UV takes advantage of this weakness. Since then, researchers from Cornell, the University of Florida, Rensselaer Polytechnic Institute, the USDA Agricultural Research Service Grape Genetics Research unit, the Norwegian University of Life Sciences, along with the Norwegian Institute of Bioeconomy Research (NIBIO), have formed the Light and Plant Health research group to adapt the findings for different crops and field conditions.

Efforts to include mention of CleanLight, a UV tech supplier with a presence in Canada, were declined at time of print.

Peter Mitham is a freelance writer based in B.C.