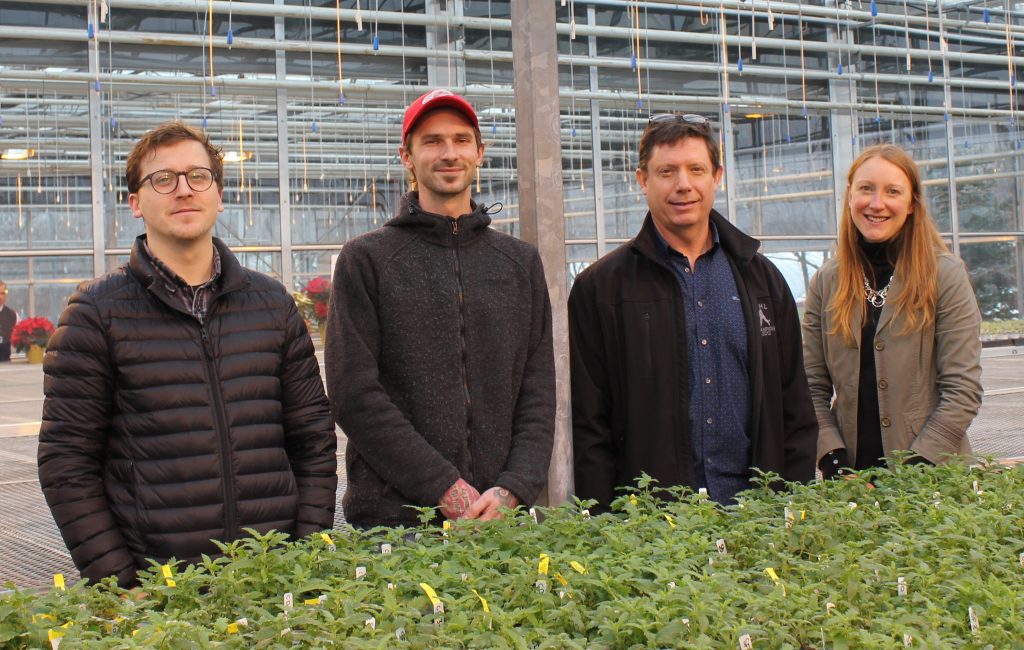 From October 4, 2017 to January 8, 2018, a research project was conducted at the Niagara College, Niagara-on-the-Lake greenhouse to evaluate the efficacy of Silamol, a silicon product designed to help reduce the negative impact of biotic and abiotic stress in plants.

Silamol is a highly-concentrated, stabilized form of a potassium silicate liquid. Once completely diluted in water, Silamol produces [Si(OH)4] known as monosilicic acid, the only known plant-available form of silicon (Frontline Growing Products, 2018).

While silicon is one of the most abundant elements in the soil, it’s not always available to plants. Naturally-occurring microbes transform the silicates into silicic acid, which is taken up by the plant. However, growing media does not usually contain these microbes. In addition, greenhouse crops are grown and harvested in a matter of weeks or a couple of months, so speed of uptake and bioavailability of silicon are critical. By providing a plant-available form of silicon (i.e. monosilicic acid), it can be quickly absorbed by the plant.

The research study evaluated the efficacy of Silamol in reducing the incidence and severity of disease in a greenhouse-grown potted Verbena (Verbena x hybrida Quartz XP series) crop. Verbena was chosen by a local greenhouse producer as the ideal crop for this study, due to its high susceptibility to disease, especially powdery mildew.

All plants were grown on the same bench in the Niagara College, Niagara-on-the-Lake Campus greenhouse, using no supplemental lighting. The average greenhouse temperature during the study was 21°C, and the average relative humidity (RH) was 70%.

On October 4, 2017, 240 verbena plants were transplanted from seedling plug trays into 4” containers, filled with a shredded wood fines growing substrate (Gro-Bark, Caledon, ON). The containers were evenly spaced on the bench in 20 trays, each containing 12 planted containers. Each tray contained plants assigned to one of four treatments, arranged in a randomized complete block design on the greenhouse bench, with a total of 60 plants per treatment (Figure 1).

Plants were monitored for visual symptoms of disease from October 4, 2017 until December 18, 2017, with disease incidence (i.e., the number of diseased plants) evaluated at eight time points during this observation period. At the completion of the study on January 8, 2018, disease severity was ranked on a scale of 0 (no disease) to 10 (fully diseased).

Above-ground shoot growth, for each of the seven representative plants per treatment, were placed into paper bags on January 8, 2018. Bags were dried at 70°C until a constant weight was achieved.

The difference in growth between the drench and foliar applications of Silamol might be one factor for growers to consider when evaluating the best application method for this product. 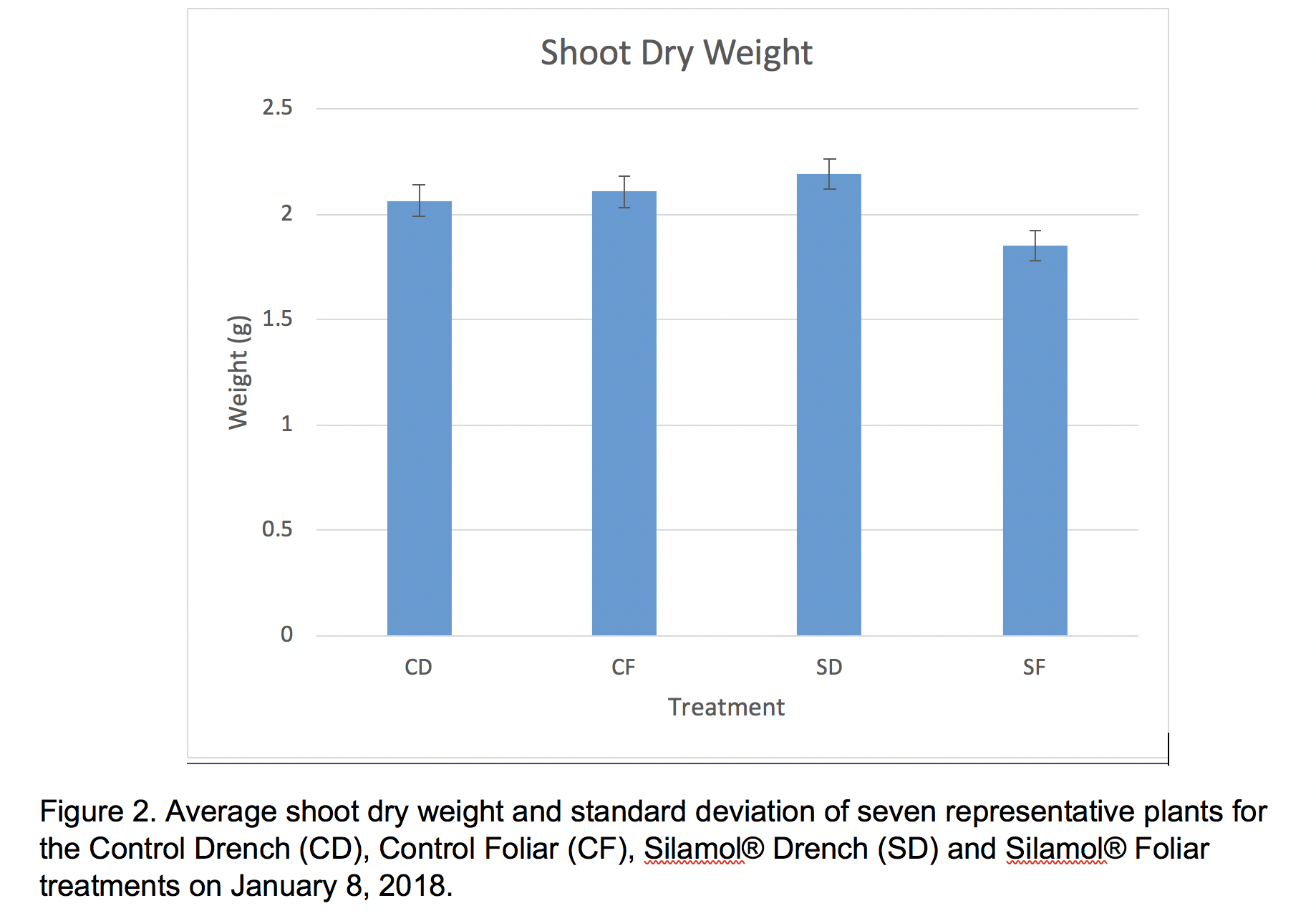 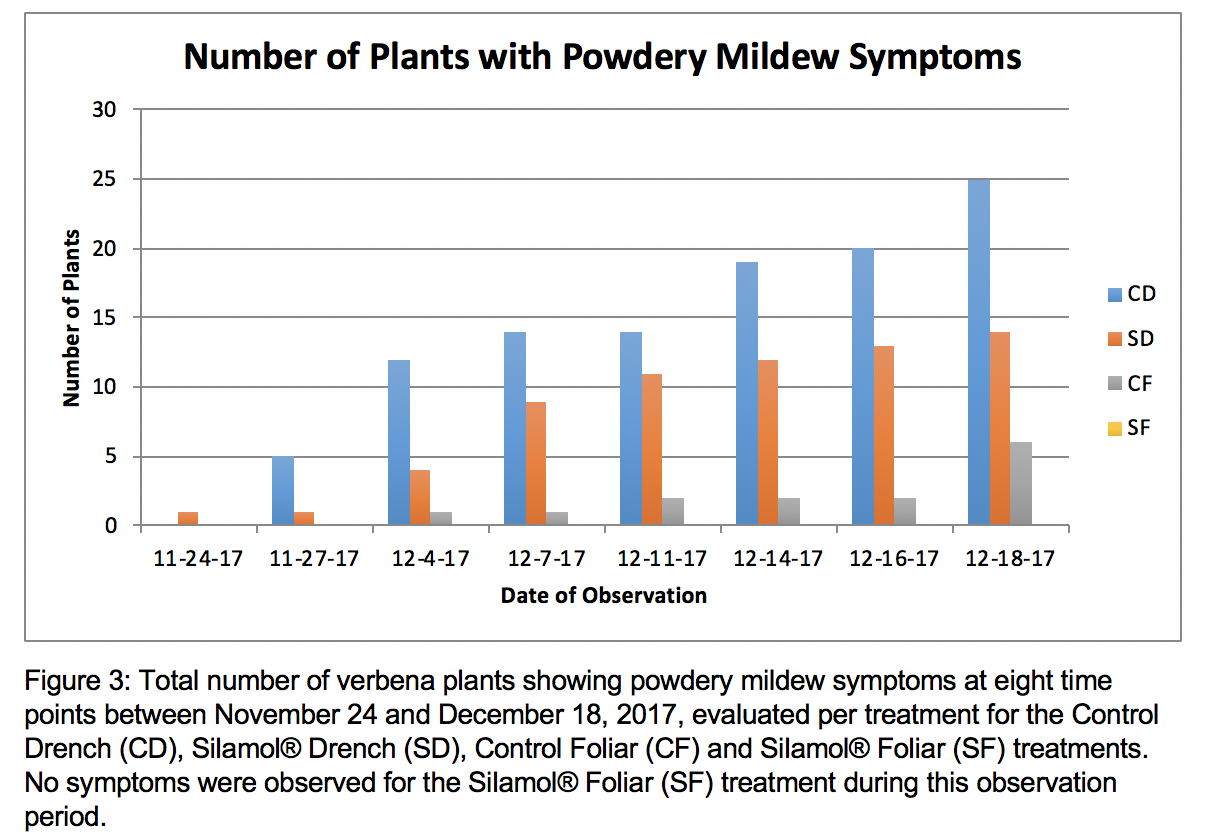 Acknowledgements: This research was coordinated by the Niagara College Research & Innovation team, and was generously funded by OCE CVTA and Frontline Growing Products. Plant material was kindly supplied by Schenck Farms & Greenhouses Co., while Gro-Bark kindly supplied the growing substrate.

Mary Jane Clark is professor of horticulture, and Evan Hadley and Charlie Laporte are student researchers at Niagara College. For more, contact Mary Jane at marclark@niagaracollege.ca.