Seedlings of lodgepole pine and white spruce doubled in height after two months. It was also used to grow greenhouse tomatoes, and a 15 per cent higher yield was achieved versus use of synthetic fertilizer. 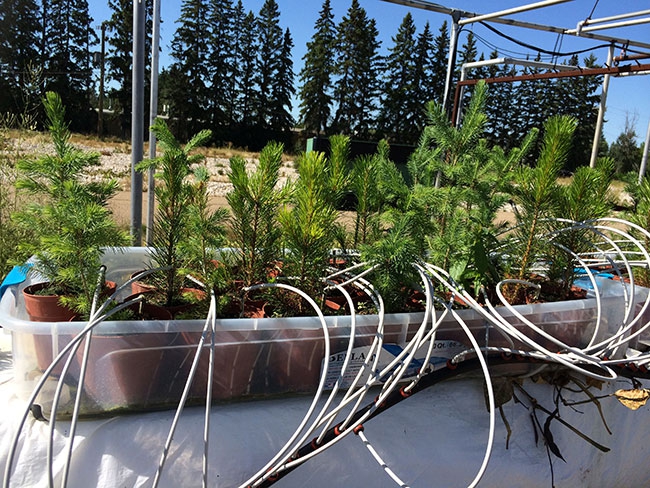 January 2017 – “The fact is that if we don’t learn how to recycle nutrients and water, we are doomed. We will start dying off from hunger. This is just one approach to prolong our existence on this planet.”

That ominous warning comes from Dr. Nick Savidov, who recently assumed the position of senior research scientist at the Centre for Applied Arts and Sciences/Centre for Applied Research and Innovation at Lethbridge College.

By recycling nutrients and water, he means extracting the valuable nutrients from waste streams like animal manure by using micro-organisms in an oxygen-rich environment within a device called a bioreactor to mineralize and dissolve the nutrients in a liquid solution. The nutrients can then be re-used as plant food.

Savidov describes this as a sustainable approach to agriculture that could help save humanity from starvation down the road.

Tapping into this source of organic fertilizer from aerobic biodigestion is critical to continued human life on Earth, Savidov says, because current synthetic fertilizer sources are non-renewable.

For example, he says that according to a recent survey by the International Fertilizer
Development Centre (IFDC), 85 per cent of all phosphorus rock reserves on the planet, which are used to produce phosphorus fertilizers are located in just one area – in Morocco and the Western Sahara. Also, current nitrogen synthetic fertilizers can only be produced using non-renewable fossil fuels.

Savidov has worked with an Alberta Agriculture and Forestry (AF) research team that included engineer and system designer, Marc Legault, to demonstrate the use of an aerobic bioreactor to mineralize nutrients from raw poultry manure. They used the dissolved organic fertilizer, called “digestate,” to grow tree seedlings and other commercial plants in a soil-less growing environment.

IMPRESSIVE RESULTS
So far, the results have been highly successful.

For example, seedlings of lodgepole pine and white spruce fed with this mineralized organic nutrient stream “doubled in height after two months. The results exceeded all our expectations,” Savidov says.

The organic fertilizer was also used to grow greenhouse tomatoes. A 15 per cent higher yield was achieved versus use of synthetic fertilizer because of enhanced nutrient uptake by the plants.

He emphasizes, however, that before greenhouse food producers in particular adopt this nutrient recycling and organic fertilization method, they should have a well-developed, on-farm food safety program in place.

In addition to demonstrating this nutrient recycling method, one of the major objectives of this study was to consider protocols to minimize the potential for food contamination pathogens, for example, of poultry manure through aerobic biodigestion and then the use of the mineralized nutrients within a greenhouse setting.

“There is always a risk of cross-contamination even for hydroponic greenhouses,” Savidov says. “That’s why a robust on-farm food safety program is necessary to minimize the risk for commercial growers. Some greenhouse techniques will have a lesser chance of cross-contamination, for example, drip irrigation in vine crop production versus the deep flow technique.”

However, he still is a strong proponent for the widespread use of this nutrient and water recycling system within the greenhouse industry.

“It is my strong opinion that there is no alternative for zero-waste nutrient recycling technologies where the agricultural waste is used for food production in future,” he says. “We just need to do it in an intelligent way.”

In addition to enhanced growth, researchers have discovered another benefit to using recycled organic fertilizers instead of synthetics: they are biologically active with beneficial micro-organisms.

In addition to exceptional growth over a short period of time, the tree seedlings also experienced enhanced root biomass development, robust health (such as better resistance to root pathogens), and improved nutrient uptake, meaning that they experienced exceptional growth in low nutrient solutions. In other words, growers can use small amounts to achieve big results, which could be a huge economic benefit.

Furthermore, the water used in these soilless growing systems is recycled so there is less pollution released to the environment and the grower achieves greater water use and nutrient uptake efficiencies.

Researchers chose to work with poultry manure as their raw material because it was readily available, rich in nitrogen, and less fibrous than cattle manure, which because of its fibre content, takes longer to ferment. The processed poultry manure resulted in organic fertilizer with low sodium content, which can be toxic to plants in higher concentrations, and pH within the tolerable range for plants.

“Elimination of pathogens from the reaction mixture is a part of the protocol of aerobic biodigestion of poultry manure,” Savidov says. “The process is assumed completed when free from E. coli and salmonella.”

He adds that biodigestion is an exothermic process with a pasteurization phase. Researchers observed that at a temperature of between 55 C and 63.5 C in the reaction mixture for two to four days of fermentation, pasteurization “eliminates the original microflora from the reaction solution.”

Savidov says it is possible to extract valuable nutrients from all forms of animal manure or other food and agriculture byproducts using their bioreactor system.

Savidov says there is no odour during the reaction process, except when the raw manure is added because oxygen reacts with common odour-causing compounds like hydrogen sulfide.

Because all components within the raw manure will completely mineralize over different time intervals, there will be some solid material left in the liquid outfeed stream after three weeks.

After about three weeks, the bioreactor is stopped and the processed liquid is removed to a filtration tank. The solids are separated from the liquid and returned to the bioreactor for further fermentation, while the liquid stream is ready for use as organic fertilizer. Maintaining pH below 6.5 is most critical for producing consistent results.

“To be honest, it’s not really an absolutely new system,” Savidov says. “It’s using bits and pieces of what is already used in the agriculture industry for manure treatment.” He adds that greenhouses and nurseries would have to change very little to convert from synthetic fertilizer to this type of organic fertilizer.

Tony Kryzanowski is a freelance writer and photographer in Alberta.