This research study shows how sulphur can be reduced by 87.5 per cent in potted mums without compromising quality. 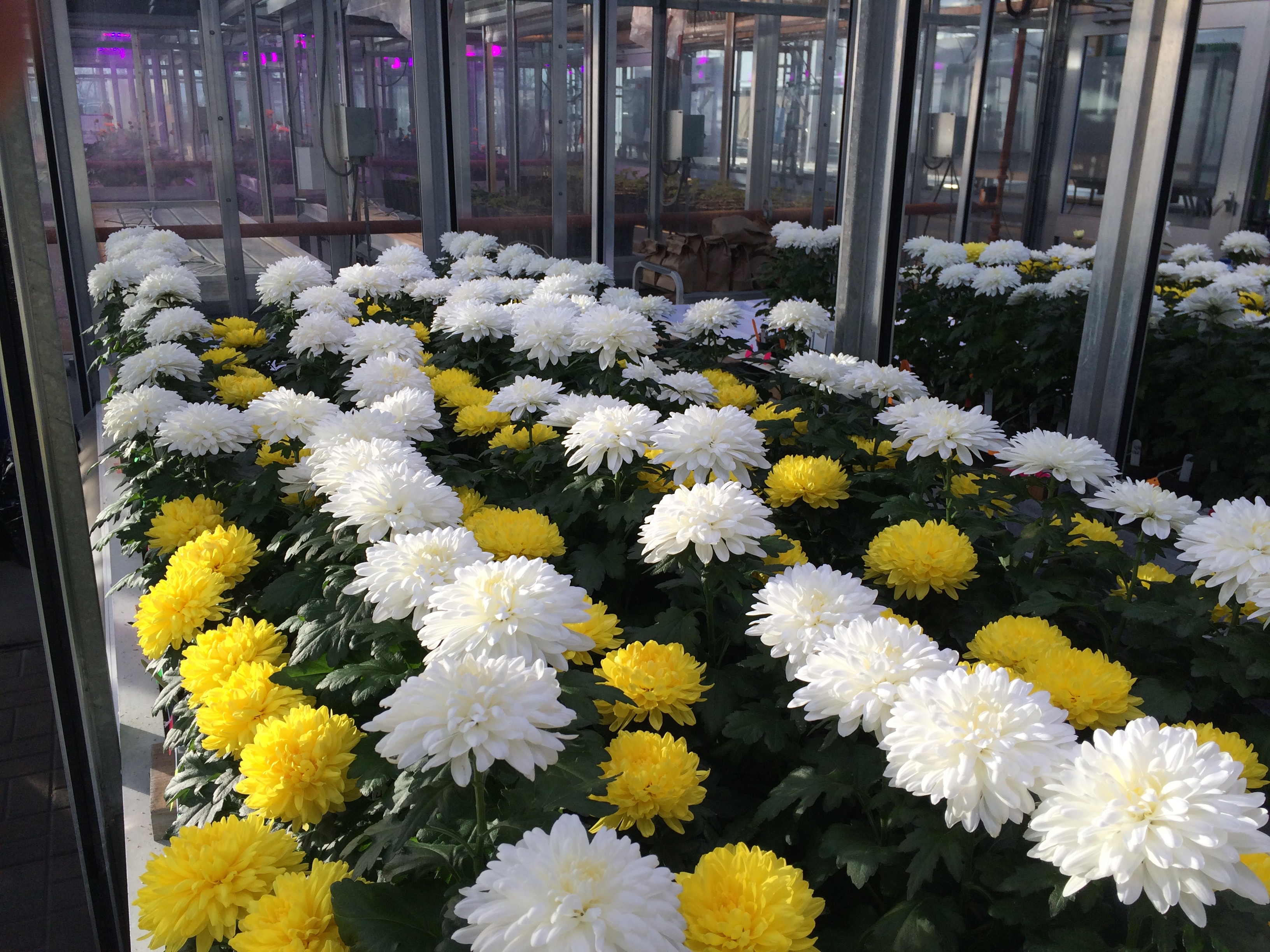 For plants, sulphur (S) is essential for growth and development. Many forms of S exist in plants. These include: sulphate, the main source of S extracted from soil; amino acids important to plant health; and, other compounds needed for plant defence.

Sulphur can be stored, primarily in mature leaves and stems, then drawn from later in plant development to satisfy some of the S demands in reproductive stages, such as flower and seed development. S deficiency can also change how S is transported into the plant, which promotes the movement of sulphate into and through the roots, as well as the release of stored S for metabolism and/or transport to other areas of the plant as needed.

While S is applied at the lowest concentration of all the macronutrients in fertilizer solutions, it is typically applied in excess of the plant’s needs. Recently, we tested two methods for reducing the S supply to sub-irrigated, potted, disbudded chrysanthemums: (1) S removal during the reproductive growth stage; and (2) S reduction during the vegetative growth stage. All the S regimens tested produced market quality plants, even when S delivered over the crop cycle was substantially less than typical industry recommendations. Together, these two methods offer a novel delivery strategy for efficiently managing the S nutrition of chrysanthemum.

EXPERIMENTAL SET-UP
Disbudded, potted chrysanthemums were grown in an uncharged peat-perlite mix under greenhouse conditions using two cultivars (‘Olympia’ and ‘Covington’) and four different S treatments, each replicated in four different areas. Similar to the industry standard, 72 ppm S was supplied as a complete nutrient solution over both vegetative and reproductive growth stages (labelled as 72VR). The three experimental treatments, 72, 36 and 18 ppm S, were supplied in an otherwise complete nutrient solution up until the inflorescence emerged (i.e., during the vegetative stage only), and then replaced with deionized water during the reproductive stage (labelled as 72V, 36V and 18V, respectively). The plants were harvested when the flowers were fully expanded (eight weeks after short days were imposed to induce flowering), and assessed for visual quality and plant characteristics

FLOWER QUALITY UNCHANGED
Being distinct cultivars, the morphological characteristics (i.e., shoot length, inflorescence diameter and fresh/dry mass yields) differed between ‘Olympia’ and ‘Covington’. However, neither cultivar was affected by removing S during the reproductive phase and/or reducing S during the vegetative stage. Regardless of treatment, market quality flowers were produced without any decrease in flower diameter or visible symptoms of S deficiency on either leaves or flowers (Fig. 3), even when given the lowest S treatment of 18 ppm S during the vegetative stage, and zero S during the reproductive stage (18V).

PLANT CHANGES SULPHUR USE AND UPTAKE
To better understand how chrysanthemums were able to compensate for the lower S inputs, two measures of S use were calculated: S-use efficiency (shoot dry weight divided by weight of sulphur input) and S-uptake efficiency (shoot S content divided by weight of sulphur input). As shown in Figures 1 and 2, both measures generally increased in ‘Olympia’ and ‘Covington’ with decreasing S. These results suggest that the primary method for the chrysanthemum plant to improve S use efficiency with decreasing S inputs was increased uptake efficiency. This could be explained by stimulation of multiple transport proteins that mediate the movement of sulphate from the soil into and through the root, driven by a deficiency in S.

FROM RESEARCH TO APPLICATION
This study monitored the response of two morphologically-distinct cultivars of sub-irrigated, potted chrysanthemum to various S regimens. With both cultivars, market quality plants and flowers were produced, even when S delivery over the crop cycle was reduced by approximately 87.5 per cent of typical industry recommendations.

Our previous research demonstrated that levels of the highly-mobile macronutrient, nitrogen, delivered in the nutrient solution to sub-irrigated, potted chrysanthemums, can be reduced by 50 per cent during vegetative growth, and then completely removed during reproductive growth without adverse effects on plant/flower yield and quality, giving an overall reduction in nitrogen use by 75 per cent. We are continuing study of the remaining macronutrients (i.e., phosphorus, potassium, calcium and magnesium), as well as the micronutrients (i.e., zinc, copper, iron, manganese, boron and molybdenum), in order to develop a complete, optimized nutrient regimen, which will then be validated in a commercial setting. These modified management practices should be readily adoptable by growers, with no additional research and development necessary, particularly since there does not appear to be substantial differences between cultivars in their response to our nutrient delivery system.

Chrysanthemums are a popular indoor-grown potted plant in Canada, and with our novel nutrient delivery system, it will be possible to reduce fertilizer use, as well as the volume of nutrient solution that must eventually be managed in accordance with applicable environmental legislation.

Acknowledgements: This research was funded by the Ontario Ministry of Agriculture, Food and Rural Affairs through the OMAFRA-University of Guelph partnership. Thanks to Berger for providing the uncharged growing medium.

William Sutton and Barry Shelp are graduate student and Professor Emeritus, respectively, in the Department of Plant Agriculture at the University of Guelph. For more information, please contact Dr. Shelp at bshelp@uoguelph.ca.

Related
A new way to lower nitrogen inputs
Growth-tracking tool launches for mum growers
Annuals and perennials that cause a buzz
How safe is your pesticide program?