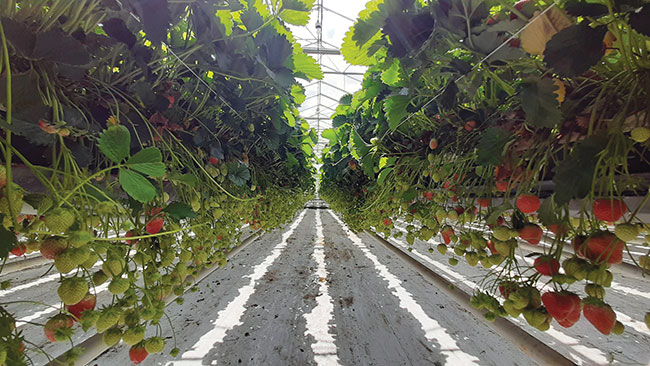 Compared to untreated water, this research study shows how oxygenation can lower the presence of Pythium and Phytophthora. PHOTO credit: Moleaer

Oxygen is an important part of the rootzone environment. Not only is it required for growth, but research has shown that it can help increase the uptake of nutrients and suppress disease.

There are various water aeration systems available on the market, most of which use diffusers to blow or mix in air bubbles. However, De Jong claims that “these technologies cannot surpass normal saturation (100 per cent), meaning that the dissolved oxygen they can add to the water is very limited.”

To help reach higher levels of oxygenation, Moleaer uses a different way of introducing oxygen into the water called nanobubbles. Nanobubbles are microscopic bubbles that are designed to remain suspended in water for long periods of time, keeping dissolved oxygen (DO) levels high and constant. Their nanobubble generator is said to add between 8 and 40 ppm of oxygen, increasing oxygenation levels by as much as 500 per cent.

To test the effects of using nanobubbles in greenhouse strawberries. Netherlands-based Delphy conducted a hydroponics study at its Research Institute, in partnership with Moleaer.

In the study, the roots of an untreated group of plants were exposed to DO levels between 7 and 9 mg/L, while the second group was exposed to nanobubble-treated water for a DO level of 30 mg/L. The research team concluded that the treated group achieved a yield increase of 14 per cent compared to the control group (8.2 kg vs 7.2 kg). The team also found that plants treated with nanobubbles had 74 percent lower Pythium counts, healthier root masses and lower instances of Phytophthora.

Delphy scientist Bart Jongenelen notes in the study summary that “for these trials, we chose to focus on yield and to follow the root development with visual inspections. Clear differences emerged from this…During the visual root inspections, we observed that the control was much more affected by Phytophthora infestans. The roots with the nanobubbles looked much healthier.”

De Jong explains that the nanobubbles serve a dual purpose. “First, nanobubbles deliver oxygen extremely efficiently into water which allows us to maintain very high saturation levels with minimal loss,” he says. “This enables us to deliver significantly more oxygen into the root zone and promote healthy root development. Second, the oxidative properties of the oxygen nanobubbles break down algae and suppress pathogens, effectively improving the water quality and maintaining a more hygienic irrigation system.”