Breeders share their thoughts on garden vegetable marketing and new recommendations for the Canadian market. 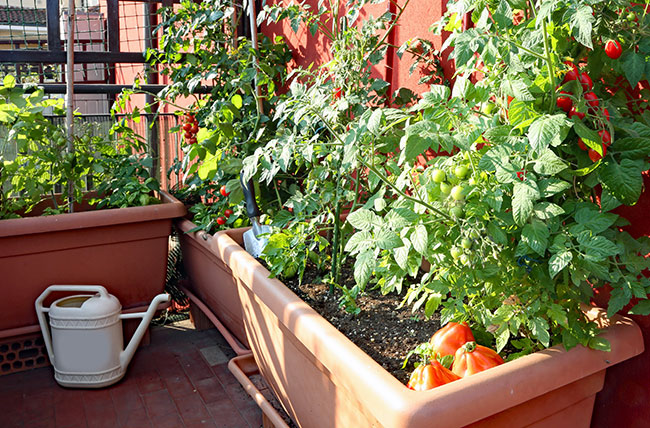 Marketing garden vegetables isn’t quite the same as flowers. It depends on the interests of the target market, as well as their culinary inclinations. Photo: gettyimages: ChiccoDodiFC

It’s no secret that vegetable gardening was a hit among many Canadian households this year. But for bedding plant growers or garden centres looking to add vegetables to their repertoire, experts are stressing the importance of assessing the target consumer market before taking on new edible offerings.

For instance, different tomatoes serve different purposes and each offers distinctive differences in flavour and texture, explains Jeannine Bogard, business lead on home and garden vegetables for Syngenta Flowers. Rather than choosing a variety based on its ability to fill a one-gallon pot, Bogard suggests considering the needs of the end consumer. “Are they looking for the prettiest plant or something that fits into their cooking styles?”

Garden vegetable transplants are often marketed in the same manner as flowers, focusing on size, shape and colour without mentioning taste or use. It’s this ‘connection to the belly’ that’s missing, says Bogard.

Serving a purpose different from flowers, the esthetics tend to be a little less important. “With vegetables, there’s a lot more tolerance than there is for a geranium, for example,” says Dustin Morton, sales representative for Ball Seed based in Alberta. Consumer expectations differ dramatically between a plant purchased strictly for looks versus another purchased for consumption. “It’s all function, no form,” he says of vegetables, and they will likely be purchased if the end consumer demands it. “It all depends on your market.”

Whether the main driving force is to improve food accessibility, avoid a stressful trip to the grocery store, or tackle a fulfilling outdoor project with physical and mental health benefits, garden edibles are expected to continue trending upwards. The question is, are they right for the grower or garden centre’s immediate market? And if so, which varieties would best fill a gap in existing offerings or best fit their customers’ needs? Breeders identified some of their top new edibles for Canada, slated for release in 2021. 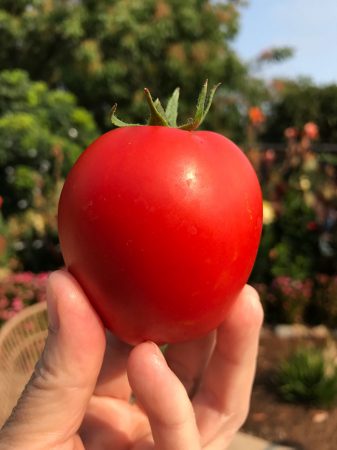 [1] Namib Roma tomato
Producing clusters of five to six uniform, firm fruit in an attractive red colour, the flavour is described as sweet and rich, best for sauces, snacking, salsas and salads. “Keeping that connection to the belly, most folks think of using Roma types for sauces or salsas – I prefer to grill them,” says Bogard. “Cut them in half lengthwise, give a light squeeze to remove the seeds.  Drizzle with olive oil and grill on low heat. Serve cold with a spritz of balsamic and chopped basil. Yum!” The vigorous plant matures early to mid-season, in about 73 days from transplant, and reaches a height of 36”. 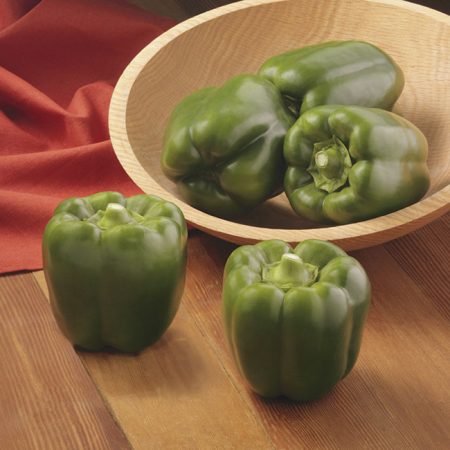 [2] Bayonet bell pepper
This blocky bell pepper is a re-release from Syngenta. Known for its high productivity under cool and drought conditions, Bayonet stands out with its continuously fruiting nature. As Bogard explains, regular bell peppers typically produce three groups of fruit on sequential nodes before the plants are done for the season. “But with Bayonet, the peppers are formed like whorls off the stem, so you have this continuous fruit set unlike the regular pepper…. This one is constantly producing as the plant matures.” The mid-sized 3” x 3.5” fruit turns red, taking about 70 days to mature from transplant. 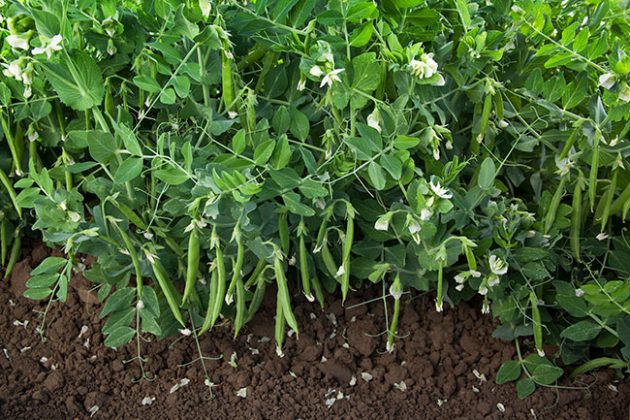 [3] Snak Hero snack pea
With its elongated 4”-long shape, this All-America Selections winner may look like a green bean but is actually a snap pea. While snap peas may be traditionally sold as packs, a suitable alternative is the hanging basket, particularly for dwarfed, short-vine varieties. “That’s the perfect environment for a snap pea because… they don’t like to have wet feet,” Bogard explains. With vines reaching 18” to 24” in length, she recommends selling them at retail when the vines measure three to four inches, then allowing them to grow out on the consumer porch for snacking and cooking. A cooler season crop, Snak Hero is ideal for early spring or fall season sales. Bogard has even trialed them as a mix with edible, trailing pansies and seen good results. 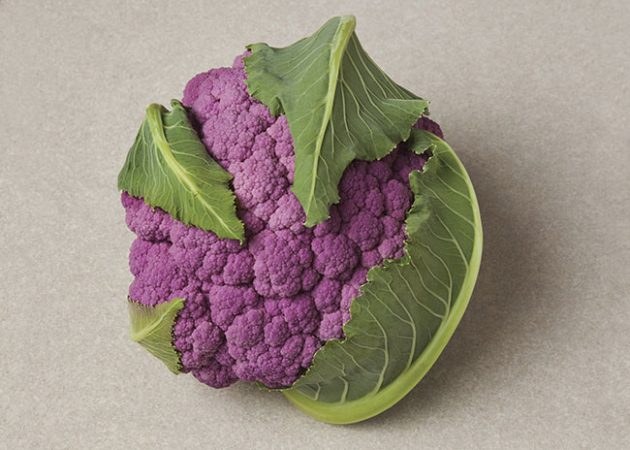 [4] Depurple cauliflower
This new lavender-pink variety complements Syngenta’s existing cauliflower offerings, including deep purple ‘Graffiti,’ pastel orange ‘Flame Star,’ and traditional white ‘Steady.’ People tend to forget about Brassicas, says Bogard, who recommends timing them with pansies, whether for production or for retail sales. With their semi-frost-tolerant nature, Brassicas can be started with other young plants for spring gardening. But, she says, there’s a second retail season mid-summer. Brassicas sold at this time will mature in consumer gardens just in time for Fall, making it an ideal shoulder-season item once the peppers are sold out. 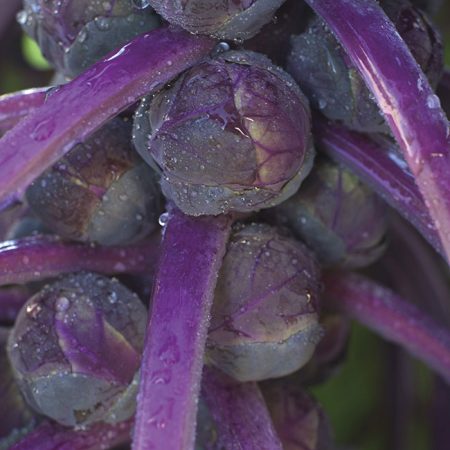 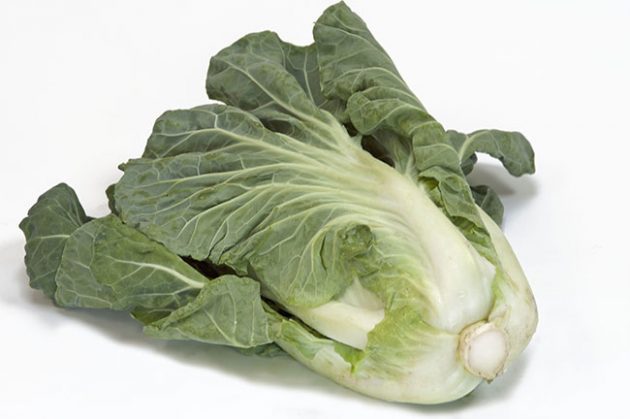 [6] Sweet Thang cabbage (Burpee)
A Portuguese cabbage, this non-heading variety is similar in habit to collard greens or kale. Measuring 2-16” tall by 10-12” wide, Sweet Thang is an ideal size for containers and balconies – areas typically too small for larger greens. “It hits that increasing trend of container balcony gardening, especially this year with everyone wanting to grow their own edibles,” says Morton. While Brassicas aren’t known for tantalizing the taste buds, this variety promises ‘sweet tasting white veins on an attractive dark green leaf.’ Because of its non-heading nature, Morton recommends that growers let it develop a bit more to show customers how it looks at retail. Retailers could use this opportunity to educate new gardeners about pests like the cabbage moth and how to protect against them 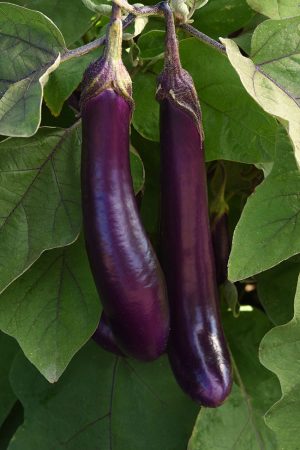 [7] Asian Delite eggplant (PanAmerican Seed)
Producing non-bitter, elongated eggplants with a shiny bright-purple exterior, this robust variety stands up on its own at just 2.5-3’ high. Smaller than grocery store offerings, baby fruit sizes measure 5-7” long by 1” wide, while larger fruits measure 9-12” long by 1.5” wide. With just 50-55 days to maturity, Morton says the shorter growing season is a good option for Albertan growers. He suggests retailing in one- to two-gallon pots, with at least one flower in bloom. 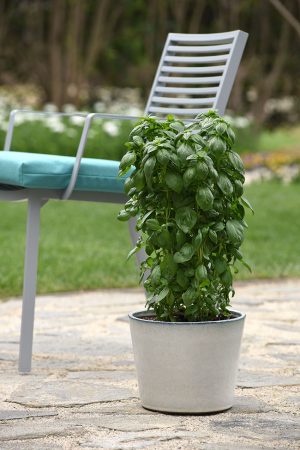 [8] Emerald Towers basil (PanAmerican Seed)
Though released last year, Morton says Emerald Towers remains one of his favourite edible varieties and deserves more attention than it has received. “It is a huge basil…up to two to three feet tall and really late to flower.” Though this Genovese basil is said to flower up to eight weeks later than standard varieties, Morton’s found that the variety works best in containers compared to being planted in-ground as it can take a little more time to develop in Alberta. His customers have really enjoyed its flavour and the ‘wow’ factor it provides in an otherwise monotonous-looking vegetable section at retail. He suggests letting the plants reach 1.5-2.5’. “The basil has to be a nice big size, because otherwise it just looks like a regular basil. It has to be seen to be believed.” Excellent for containers, particularly on a warm patio. 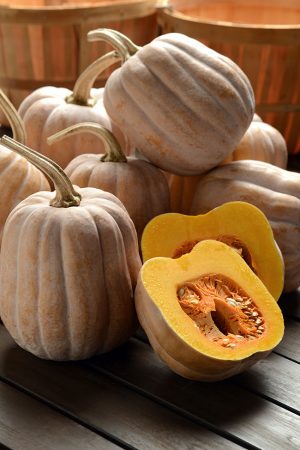 [9] Autumn Frost squash (PanAmerican Seed)
The ribbed, round winter squash produced from this variety measures 5-7” long by 5-6” wide. Though similar in colour to a butternut squash, the squatter fruit from Autumn Frost is said to be richer in flavour and lasts on the shelf for up to four months after maturity. “It’s a medium vine – a fun option for consumers with any type of growing space [in the ground],” says Morton. For retail, Morton recommends having a couple of true leaves and ensuring that it’s well-rooted. “There’s nothing worse than seeing an overgrown squash being transplanted.” 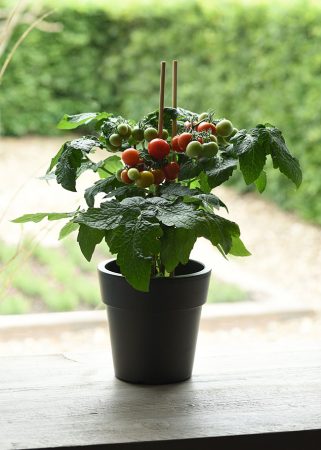 [10] Siam tomato (PanAmerican Seed)
Part of the Kitchen Minis series acquired by PanAmerican Seed last year, Siam is the first tomato in a lineup of peppers and its small stature fits the bill. Measuring 7-9” tall by 10-12” wide, the compact determinate variety produces small, bright red fruit measuring 0.5-1” in diameter. “They are a cherry tomato but it’s intended to grow on a sunny windowsill or a counter in your apartment or house. It’s hitting on the edible trend, but it’s for people who want to be plant parents or who don’t have a balcony for growing [edibles].” Targeting a different consumer, Morton says Siam is an ideal option for year-round garden centres and wholesalers with grocery store clientele, appealing to end-of-season tomato lovers from October to January. He recommends retailing in 5-6.5” pots, with some fruit visible and close to ripening. 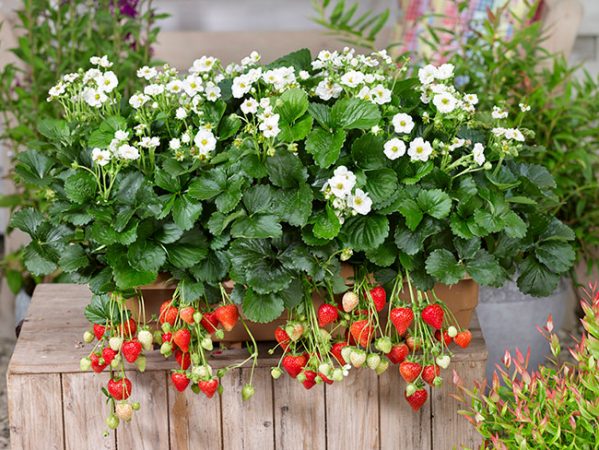 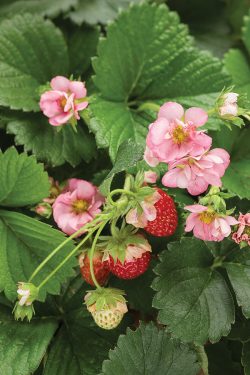 [11] Berried Treasure strawberry – White [A] and Pink [B]
First released two years ago, the original Berried Treasure Red won a number of awards in trials across North America including one for ‘Top Performer’ at the University of Guelph. For 2021, Proven Winners is releasing two additional colours in pink and white. Both attractive and functional, this ever-bearing series offers luscious red strawberries among semi-double pink or white blooms. Runners can develop over time, adding a trailing element. Hardy to zone 4a, 12-16” tall by 18-24” spread.