Lighting, and its effect on plant growth, was just one of several themes among student research initiatives at U of G last semester.

This is the fifth year I have assembled the abstracts of the students in the greenhouse production course. This course is a prerequisite for the undergraduate B.Sc. Agriculture degree, and it is usually taken in the third year. Besides the lectures, the students are also fulfilling a lab portion, which usually focuses on a research topic. Many projects deal with studying the effect of an environmental factor on the growth and/or development of a plant/species.

However, if students come with their own idea, then I would allow this, provided there is a scientific question to be answered within a reasonable amount of time and money. The project, which is generally done by two people, provides the student with some “hands-on” growing experience, as well as some basic research experience. The projects are not considered to be conclusive for various reasons. Following are short summaries from the winter semester of 2007.

1. Light Emitting Diodes as a Source for Night Break in Chrysanthemums
(Fig. 1). The setup of the two light-emitting diodes (LED) lights (10 LED/light) for night interruption in a blackout bench with chrysanthemums placed at locations with various intensities.
By Jason Wierenga and Alex Verbinnen
Light emitting diodes (LED) are very efficient in transforming electrical energy into monochromatic light. Incandescent light bulbs have been used to interrupt the dark period so that plants remain either vegetative (short day plants) or become generative (long day plants). Phytochrome is the pigment in plants that controls flowering, and is responsive to light in the 650-750 nm wavelength. Some LEDs can produce a light spectrum which may be more effective to control photoperiodism in plants. Twenty red LEDs (633 nm wavelength) were installed at the short side of a blackout bench in order to create different light intensities on a five-metre long blackout bench (Fig. 1). Chrysanthemum plants were arranged on the bench so that 10 different groups received different light intensities. Lights were ‘on’ from 10 p.m. until 2 a.m. every night as a night break. The results showed that an intensity of 0.3 µmol/m2/s was sufficient to keep plants vegetative. The LED lights required about 2.4 W/m2 of electricity.

2. The Effect of Copper on the Vase Life of Cut Tulips
(Fig. 2). Scale for evaluation of different aspects in the cut tulip shelf life study.
By Katie Sirois and Hilary Sutherland
The effect of copper on prolonging the vase life of cut tulips was investigated. Copper may play a role as a bactericide or an inhibitor of occlusion enzymes stopping the blockage of the xylem, allowing for continued water uptake. Copper coins and copper sulphate were added to de-ionized vase water of cut tulips and compared to a control, and treatments with a peroxidase inhibitor and a phenylalanine ammonia-lyase (PAL) inhibitor. Vase water was tested for bacteria, and the vase life of tulips was measured using a visual scale (Fig. 2). Water uptake was also investigated through the weighing of the tulips. There were no significant results for copper acting as a bactericide. As well, copper did not significantly improve the quality and vase life of cut tulips. No conclusive evidence was seen for copper acting as a peroxidase or PAL inhibitor improving water uptake of the tulips. 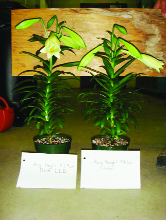 3. The Effect of One Hour of Red or Blue LEDs on the Height of Easter Lilies
(Fig. 3). The effect of low intensity, one-hour of red light using light-emitting diodes (LED) at the end of a 12-hour photoperiod compared to the control (no light extension). The study was done in a growth chamber.
By Dave Captein and Marinus van Eekelen
Red and blue light emitting diodes (LEDs) were evaluated to determine their effects on Easter lily height. Easter lilies were grown in two chambers, separated in the centre with fluorescent lighting for 12 hours with an additional hour provided by the red or blue LEDs on one side of the chambers. The red LED resulted in an average of 2.8 cm taller plants compared to the control with a standard error of 0.84 (Fig. 3). Blue LED light had no significant effects on Easter lily height compared to the control plants.

5. Evaluating the Efficacy of Various Soluble Organic Fertilizers as a Nitrogen Source for Vegetable Crops in the Greenhouse
(Fig. 5). Parsley plants that were fertilized with four different organic fertilizers.
By Eric Hogervorst and Kyle Braden
With the increasing consumer interest in personal health and in the sustainabi-lity of the environment, organic agriculture is attracting an increasing level of interest. Nitrogen is one of the most important nutrients to the plant and organic sources are needed to supply this new demand. This trial looked at four different organic fertilizers – Wilson Fish Base All Purpose Plant, RainGrow, Pure Blend and Alaskan Fish Fertilizer – and a synthetic fertilizer, Miracle Gro. Each was calculated to provide applications of 150 ppm of nitrogen. Pure Blend showed comparable results to Miracle Gro, the Wilson Fish Base was less effective, while the other fertilizers had significantly less growth (Fig. 5). The nitrogen in
organic fertilizers appears to be not as readily available and may require time and decomposition to be more
effective. 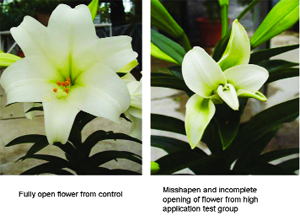 6. Effect of Primo Maxx on Plant Height and Flower Development of Easter Lilies
(Fig. 6). A normal flower (left) and a misshapen flower (right) due to high concentration of treatment with PrimoMaxx, a turf growth regulator.
By Chris Stasko and Gavin Grusnick
Primo Maxx, a plant growth regulator used in the turf grass industry, was tested for control of plant height and flower development on ‘Nellie White’ Easter lilies (Lilium longiforum). Primo Maxx (11.3% trinexapac-ethyl) was applied as a spray at 0 (control), 0.1, 1.0 or 10 mL/L as a single spray (Jan. 15), or a double spray (Jan. 15 and Feb. 12) at 8 mL per plant. Plant height was not affected by the application of Primo Maxx compared to the control. However, Primo Maxx delayed flowering at the high rate (10 ml/L) and caused deformed flowers to occur when applied twice at the high rate during the growing season (Fig. 6). It is suggested that Primo Maxx may delay flower development even with a single application at 10 ml/L. 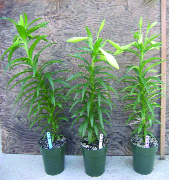 7. The Effects of Wind Speed on Plant Height and Flower Development of Easter lily ‘Nellie White’
(Fig. 7). Easter lilies exposed to different wind speeds – (left to right) ambient, medium speed (0.5-1.5 m/sec) and high speed (3-5 m/sec) – from the end of January to flowering.
By Jonathan van Wiltenburg
A comparative analysis was conducted on Easter lily (Lilium longiflorum ‘Nellie White’) grown under three different wind conditions (high 3-5 m/sec, medium 0.5- 1.5 m/sec, and ambient) from the end of January until flowering (end of March). Increases in height (from start of treatment), bud number, aborted bud number, and flowering dates were recorded and statistically analyzed. It was concluded that plants were about 4 cm shorter under the two wind treatments compared to ambient, and were three days delayed (Fig. 7). Wind had no effect on the number of flowers produced or the number of buds aborted.