Changes to Agricultural Land Reserve in BC aim to protect farm lands but also have unforeseen impacts. 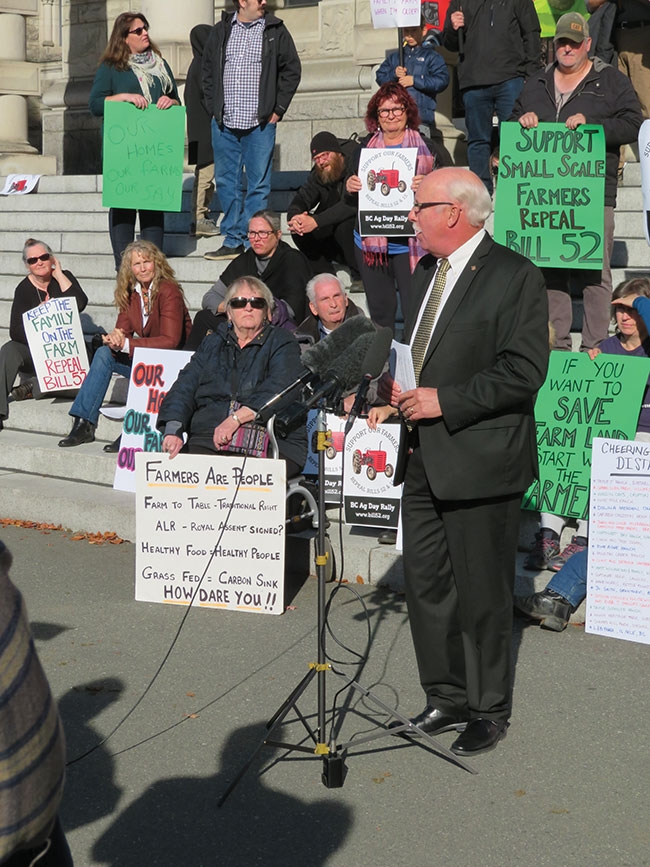 Crisp autumn days and the approach of Halloween bring the ghouls out of hiding at Gary and Lisa Moran’s farm in Chilliwack, a 90-minute drive east of Vancouver.

Over the course of three weeks each October, a 4,000-square-foot former propagation area transforms into a haunted house, generating additional income that he ploughs back into his 26 acres of pumpkins, corn and other vegetables. A 5,000-square-foot greenhouse, where he handles starts for his own farm and a neighbour, sees regular use throughout the year as an event space.

But this year, ghouls of another kind emerged when Chilliwack city staff recommended he apply for a non-farm use permit such that his agritourism venture would be compliant with regulations governing BC’s Agricultural Land Reserve (ALR). The application was refused, with no apparent reason given. He called the Agricultural Land Commission (ALC) for clarification, but his calls weren’t returned. It was just before Easter, and the farm’s annual Eggstravaganza event was running, so he let it be. The farm’s summer events proceeded. Then, just before the haunted house reopened this fall, city staff told him he couldn’t operate. Moran was floored, and called the mayor.

“The ancillary income we get from our agritourism always goes back into our farm,” he says. The city relented, allowing Moran to operate through Halloween but prohibiting future events. “They gave us to the end of the month; but you cannot do your Christmas season. You cannot do Easter next year,” he says.

Moran isn’t the only grower hit by a crackdown on what’s allowed in the province’s venerable ALR, established in 1973 to protect farmland from urban development. Darvonda Nurseries Ltd. in Langley must move its Christmas-themed Glow event, trading its greenhouses for the exhibition centre in neighbouring Abbotsford.

While greenhouses occupy a fraction of the 4.6 million hectares (11.4 million acres) within the ALR, itself just 5 per cent of the province’s entire landbase, they’re in a unique situation. Many either have concrete slab floors or small sections of it, making them similar to some other industrial facilities against which the ALR was supposed to protect farmland. They’re also the facility of choice for one of Canada’s most controversial crops: cannabis. The scale of many operations also means they need workers, lots of them, and Canada’s shortage of domestic farm labour means those workers are often hired under one of the country’s foreign worker programs and live onsite.

These factors have put greenhouses at the nexus of changes which BC has been making to strengthen farmland protections. The reserve was created during a period of concern about development; similar initiatives were afoot in California and Oregon at the time, but in 1973 the newly elected BC government under Premier Dave Barrett implemented a province-wide protection program based on soil quality for all properties more than two acres in size. This makes it different from other programs, such as Ontario’s greenbelt, which are limited to specific regions.

While many landowners felt the province had limited their property rights, the reserve eventually became a sacred cow. It was often milked for infrastructure projects and industrial development, however. The expansion of greenhouse acreage in Delta in the late 1990s, followed by port expansion a few years later, drew much criticism. In 2017, a new provincial government pledged to strengthen the rules to protect farmland from speculation and development.

A public consultation in 2018 was followed that fall by Bill 52, which introduced new rules governing what was allowed in the ALR, including residential development. Spring 2019 saw the passage of Bill 15, which overhauled how the commission overseeing land reserves does its business.

Moran sees the new legislation further limiting what he can do, but Stan Vander Waal, president of the BC Agriculture Council and owner of Rainbow Greenhouses Inc., a wholesale grower and distributor of potted plants based in Chilliwack, is more positive.

“The regulation as it applies, even with the changes, have not negatively impacted an average flower grower,” he says, but adds, “There’s no question that there’s a higher level of bureaucracy now.”

The province is emphasizing a farming first approach, something that’s impacted agritourism as well as housing. Agritourism events that overshadow farming activities are no longer welcome, and are either being asked to shut down or relocate. Second residences that don’t house farm owners or workers are being phased out.

“The ALC has been more active in managing the regulation, and ensuring that there’s a level of compliance,” explains Vander Waal.

Moreover, municipalities have been positioned as the first line of defence; they’re allowed to regulate how agritourism happens and what kind of housing gets built in the ALR. Housing that’s endorsed by municipal staff get forwarded to the ALC for final approval. Temporary worker housing can be fast-tracked while permanent housing faces greater scrutiny.

“Anything that’s in the ALR now has to go to the ALC, period,” he says.

Vander Waal is seeking permission for a permanent structure right now that will house an additional 64 workers, doubling the number of workers resident on his property. It’s been going smoothly but is more onerous and drawn-out than the process for modular housing. The support of municipalities is also much more important than in the past. Overall, however, Vander Waal supports the new approach. “It’s good to have some regulation in place that puts in some level of restriction on whether you can put in housing any time you feel like doing it,” he says.

Similar challenges face vegetable greenhouses, but BC Greenhouse Growers Association executive director Linda Delli Santi was generally supportive of the changes, noting “many other sectors” are affected more than her members.

For the BCGGA, the run-up to legalization in October 2018 saw 96 acres, primarily sweet bell peppers, lost to cannabis, enough to impact BCGGA finances to the tune of more than $40,000. A net gain of 18 acres of greenhouse vegetable production this year promises to stem the losses. “We did lose some acreage to cannabis a few years ago,” explains Delli Santi, “but with our members’ continued expansion in vegetables, we are almost back to where we started.”

Among other residents of BC, however, there is angst surrounding the loss of acreage to a non-edible crop many still perceive as a drug.

“Delta stinks of cannabis,” says Ian Paton, who lives downwind from Pure Sunfarms Corp., a joint-venture between Village Farms Canada LP and Emerald Health Therapeutics Inc. that could have upwards of 4.8 million square feet of cannabis.

Paton represents Delta South in the BC legislature, serving as agriculture co-critic for the BC Liberals. The debate regarding cannabis reminds him of those around greenhouses in the 1990s. To protect greenhouse operators, the province eventually required agriculture-related bylaws in Delta be approved by the province’s agriculture minister.

It’s a similar issue today. Paton, and scores of people who participated in last year’s consultation on the ALR, want to see farmland preserved for food production, not cannabis.

The concerns prompted the province to intervene in July 2018 and limit licensed production of cannabis to soil-based systems, or structures such as greenhouses already designated for crop production other than cannabis. But when the regulations implementing Bill 52 came down in February, all forms of cannabis production were allowed in the ALR but municipalities were only allowed to regulate non-soil-based systems, such as concrete, and any others not explicitly allowed by the order in council.

But concerns hung around like a bad smell – literally.

Odours from the massive Canopy Growth Corp. greenhouse in Langley prompted some area residents to dub 2019 the “summer of stink” and push for the enforcement of federal rules requiring licensed production facilities to have systems in place for limiting emissions.

A petition, launched in September, asks BC Premier John Horgan to intervene. It argues the Agricultural Land Commission seems happy to regulate other forms of construction but is giving cannabis facilities a free pass.

“The ALC seems to have plenty of time to enforce building rules, fill applications, farmland uses, mobile home applications, and other rules – it’s time they enforce this one,” says a form letter petitioners can send to Horgan.

ALC compliance and enforcement staff are limited to enforcing the commission’s own regulations, however, not federal law.

However, Metro Vancouver, the regional district that includes the 21 municipalities and one treaty First Nation west of Abbotsford, is considering using its powers under the province’s Environmental Management Act to regulate emissions. It estimates that 6.8 million square feet of cannabis production in the region could emit 870 tonnes of volatile organic compounds (VOCs) a year. It’s those compounds that people smell when they talk about cannabis odour, and Metro Vancouver deems them hazardous because they can produce ground-level ozone. Agriculture in the region as a whole has emissions estimated at less than 200 tonnes per year.

The proposed regulation would see cannabis operations pay a registration fee of $2,000 that would cover administrative costs related to the registration of production facilities and a government review of odour management plans and inspection. Registered facilities would pay an annual fee of $250 plus an emissions fee based on estimated production.

The BC Agriculture Council notes that cannabis production is a permitted farm use and farms of any sort will generate some level of odour; it wants further work to determine what constitutes normal – and therefore, protected – farm practices for cannabis growers.

Delli Santi warns that regulating odours as VOCs could potentially impact other areas of agriculture to include livestock and manure use, especially as the Lower Mainland continues to urbanize.

Esther Bérubé, division manager of air quality bylaw and regulation development with Metro Vancouver, says that a farm operation must not contravene the province’s Environmental Management Act to be protected under the province’s Farm Practices (Right to Farm) Act; in short, normal farm practices must protect the environment.

The province’s Environmental Management Act delegates authority to Metro Vancouver to regulate air contaminants in their region. “So, basically, they cannot be in contravention of Metro Vancouver’s requirements,” she says.

The developments meant just one thing is certain for greenhouse growers operating on protected farmland in BC: the regulations aren’t becoming any less complicated. While the province is consulting with growers on how it can make their lives easier, many would like to see government get out of the way.

“They have to back off and let us be creative,” says Moran, who says the question growers always asked him when sold cuttings on behalf of nurseries was, “What can I make money on?” He says those who want to protect farmland need to ask the same question, focusing not just on preservation but profitability. “We need them to switch gears from protection to visionary,” he says.