Dec. 23, 2009, Overton, Texas – After East Texas growers take great pains
to produce beautiful poinsettias, plants free of diseases and pests that could
live for years, most consumers will take the plants home and kill them within a
couple of weeks due to improper care, according to Texas
AgriLife Extension Service experts.

Dec. 23, 2009, Overton, Texas – After East Texas growers take great pains
to produce beautiful poinsettias, plants free of diseases and pests that could
live for years, most consumers will take the plants home and kill them within a
couple of weeks due to improper care, according to Texas
AgriLife Extension Service experts.

“Poinsettias are not poisonous. That’s an urban myth,” said Dr. Karl
Steddom, AgriLife Extension plant pathologist. “But from a poinsettia’s
viewpoint, most consumers are lethal. Consumers don’t mean to kill the plants.
They just don’t know how to take care of them.” 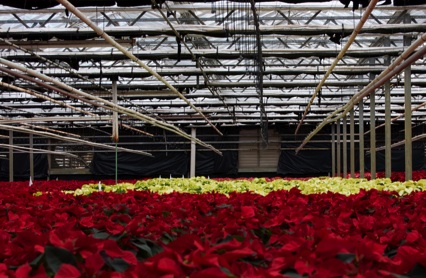 Each year, East Texas plant nurseries will produce several million
poinsettias in 6" pots for the holiday season, according to Steddom.

“Color Spot Nurseries in Troup alone will market more than a million
poinsettias this year,” said Dr. Scott Ludwig, AgriLife Extension integrated
plant management specialist. “And that’s only one of many nurseries in Cherokee
County.”

Both Ludwig and Steddom, who are based at the Texas AgriLife Research and
Extension Centre at Overton, work closely with the ornamental plant growers in
northeast Texas, whose sales total more than $500 million annually, they said.

East Texas growers may start work with holiday season poinsettias as
early as June or as late as August, Ludwig said.

“It’s complicated, as some may start with pre-rooted cuttings, others may
purchase unrooted cuttings and root their own, and still others may grow their
own poinsettia root stock plants and take cuttings from them to root,” he said.

Because of labour costs and the need for dedicated facilities, the more
common method is to start with cuttings which are usually imported. The
cuttings usually come pre-rooted in “Oasis cubes,” a small block of foam
similar to that used by floral designers to hold flower arrangements. The cubes
are sterile and can be saturated with water, but drain well.

Keeping the growth medium as clean as possible is important, because
poinsettias can be host to a multitude of plant diseases, including molds,
foliar diseases, blights and root rot. None of the diseases are of any risk to
human health, but they can reduce the attractiveness of the plant, Steddom
said.

The cubes are planted into growth medium, most commonly in 6" pots.
Again, to limit soilborne diseases, clean potting soil is used.

Insects can be a problem, particularly whiteflies, but not if growers
keep a close eye on their crop and take prophylactic measures, Ludwig said

Another growing demand involves “black-clothing.” The time which
poinsettias bloom is determined by daylight hours. Poinsettias are native to
Mexico, where changes in daylight cause them to turn from green to bright red
right before Christmas, Ludwig said.

“We say ‘bloom’ but that’s actually a misnomer, because it’s the leaves
that change colour, not the bloom,” Ludwig said. “But in most of the U.S.,
growers have to cover their greenhouses in light opaque shrouding to cause the
plants to change color in time for the holiday season.”

Growers will typically black cloth in stages, timing the operation so
that some poinsettias change colour by November for Thanksgiving, then at other
times for various shipping periods up to Christmas, Ludwig said.

Of all the plant diseases to which poinsettias are susceptible, pythium
root rot is probably the most common, Steddom said.

“Every year, some producers have at least small losses to pythium root
rot,” Steddom said. “The pythium organism can be found everywhere, but it is
encouraged by over-watering and poor drainage.”

Proper watering methods are essential. And as the disease is water borne,
so growers have to take precautions about the disease being transmitted from
one pot to the other by drainage.

Pythium root rot is also the most common scourge of poinsettias in the
home, Steddom said. The slick holiday paper wrapped around pots prevents
drainage. On top of that, consumers are prone to over-watering the plants.

“If they want to keep their poinsettias alive, remove the wrapper as soon
as possible,” Steddom said. “And don’t over-water. Simply stick your finger in
the soil and if it feels damp, don’t water it. If you let the pot sit in
standing water for any length of time, you’ll probably kill the plant.”

Steddom said they can put the holiday wrapper back on after they let the
pot drain.

“Except in South Texas, where poinsettias might survive in an outdoor
landscape, to keep the plants alive, consumers are going to have to give them
lots of light and keep a close eye on soil moisture levels,” Ludwig said.

Poinsettias can be made to re-bloom for the next Christmas season, but
it’s an arduous chore, Ludwig said.

The plants need about 14 hours of darkness alternated with 10 hours of
bright light for eight to 10 weeks, he said. Even a few hours of too much light
will scuttle the process. The temperature has to be regulated too.

“Most people will kill the plant trying to get it to re-bloom,”
Ludwig said. “Considering all the work that goes into commercially grown
poinsettias and the low cost consumers pay for them, it’s easier to just
compost them and buy a new plant the next holiday season.”