Downy mildew is a relatively new problem for basil. Here are proactive measures that can help you manage the disease in the greenhouse. 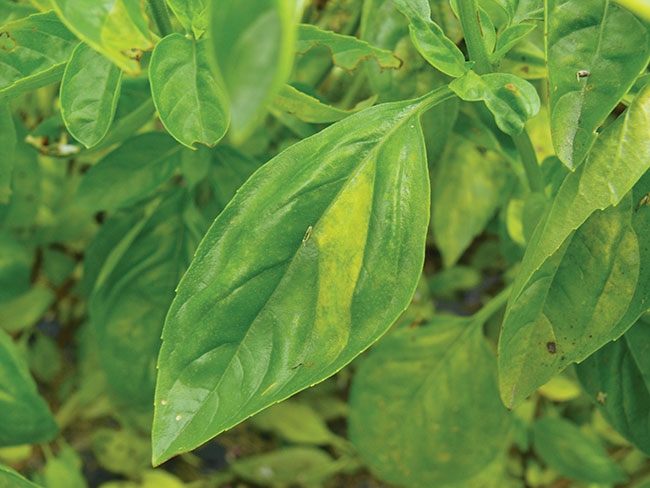 Initial symptoms of the disease include the yellowing of a section on the basil leaf. Photo credit: OMAFRA

Basil downy mildew is a relatively new disease of both field and greenhouse basil in Ontario. The disease requires diligent management in the greenhouse. Diseased plants that enter from the field or garden can contribute to epidemics if weather conditions permit. The incidence of diseased plants in retail locations has decreased in the past few years due to better management in greenhouses.

To further reduce the incidence of this disease, diligent management is needed

Caused by the fungus Peronospora belbahrii, basil downy mildew first appeared in Switzerland in 2001 and has since spread to numerous countries in Europe, Africa, and North and South America. While it does have several other hosts in the mint family, none of them have been grown for commercial purposes. It was first reported in Ontario greenhouses around 2009, with the first reports in field basil occurring towards the end of the 2010 growing season. Once initial infection occurs, the disease rapidly spreads, and basil plants become unsightly. Since the disease is likely to spread within infected plants after the plants are sold, basil plants with any level of infection should be considered unmarketable.

The disease is spread by wind, movement of infected plant material (e.g. potted plants, produce), and probably by seed. In greenhouses, the most likely sources of contamination are either infested seeds at any time of year or airborne spores coming from field and garden basil between mid-summer and early fall. Once in the greenhouse, the disease can easily spread from crop to crop in operations with year-round production. Basil downy mildew requires warm temperatures and high humidity for optimal infection and development. In greenhouses, these conditions are most prevalent in the fall when there is less sunlight but still minimal heating to dry the air. These conditions can also occur within dense plant canopies at any time of the year.

While greenhouse conditions are less favourable for disease in the spring, infections can still occur. It is at retail where the disease can thrive. Plants are often crowded in with other plants, frequently watered, and often placed in a location out of the wind and sunlight. This greatly increases the humidity around the plants and allows any minor infections to spread rapidly. Affected plants would probably be defoliated within a few weeks of sale.

Control of basil downy mildew requires a multi-faceted approach. This includes using resistant cultivars, making conditions less ideal for the disease, applying pest control products, and constantly scouting to ensure that management strategies are working. Since any level of infection is unacceptable, prevention is very important. This is not a disease that you can manage successfully after it shows up in the crop.

For the first time since the outbreak began, new downy mildew resistant cultivars are starting to be released on the US market for the 2019 season. A cultivar is considered resistant if it either completely prevents infection by the pathogen, or if it is infected but no symptoms of the disease appear. Information on many of these new cultivars can be found on Cornell University’s basil downy mildew information page (http://vegetablemdonline.ppath.cornell.edu/NewsArticles/BasilDowny.html).

Initial symptoms of the disease include the yellowing of a section on the basil leaf.

Not only is the use of these new cultivars an important tool for successful greenhouse production, but it also means a longer life for the plants outdoors once they are sold. All other cultivars of sweet, Genovese, bush and purple basil are usually defoliated by the disease by mid- to late-August, or earlier if weather conditions are favourable. It may take a few years before resistant cultivars can replace all the different types of basil preferred by consumers, and availability of resistant cultivars may be limited for the 2019 season. Spice, Thai and Indian basils appear to be naturally resistant to the disease.

Even if resistant cultivars are available, it is likely that resistance will break down after several years. Based on experience with other crops, there is usually an endless battle between new cultivars with resistance and new strains of the pathogen that can break down the resistance. Some cultivars may only be tolerant to the disease, meaning they are less affected compared to susceptible cultivars, but not immune to the effects of the disease. As a result, it is important to continue to use other preventative strategies even if the cultivar is reported to be resistant to the disease.

For year-round production, control of humidity is essential, especially in the late summer and fall. Infrared lamps have been used with some success to warm leaf surfaces at night, reducing humidity on the leaf’s surface. Continual airflow with fans can reduce humidity within the plant canopy. This depends on plants being adequately spaced to promote good airflow. Unfortunately, if humidity is not controlled successfully, fans will only encourage the spread of any disease that develops in the crop. At the garden centre, place basil in areas with good airflow around the plants and as open to the sun as possible. Water only when necessary and avoid wetting foliage as much as possible.

Several conventional pest control products are registered for the control of basil downy mildew in the greenhouse. Unfortunately, there are no organic products that provide acceptable control of the disease. Products should be applied before the disease appears, when conditions are favourable for disease development. This includes periods with high humidity in the canopy and when airborne inoculum is likely, such as late summer and early fall. Apply a rotation of registered products to delay the development of resistance.

It is important to remember that basil is an edible crop and cannot be treated as an ornamental. Only products that specifically list control or suppression of basil downy mildew in greenhouses should be applied. A listing of registered products for field and greenhouse production is provided in the Herbs section of OMAFRA Publication 837 Vegetable Crop Protection Guide.

Always confirm the success of your control strategies through regular scouting. If you catch the disease early enough, you can remove and destroy affected leaves or plants and immediately spray the crop with fungicides. This may prevent the spread of the disease within the crop.

Sean Westerveld, PhD, is the ginseng and herbs specialist at the Ontario Ministry of Agriculture, Food and Rural Affairs. He can be reached at sean.westerveld@ontario.ca.

Related
Seeing disease in a new light
Fungicide labels expanded to greenhouse basil
What is that caterpillar hiding in my pepper?
Timely tip: Assessing whitefly pressure in poinsettia