Features
Home-grown technology just down the road in Essex County

Knowledge transference: From cars to greenhouses 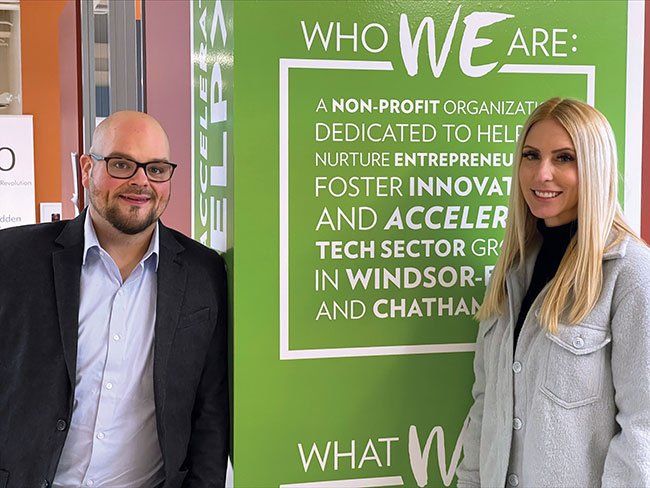 WE Tech Alliance Director of Operations and Partnership Adam Castle, left; and President and CEO Yvonne Pillon. Photo courtesy of WE TecH Alliance

In the spring of 2022, Highway 3 which stretches from Windsor to Leamington, Ontario, was undergoing a transformation.

The transportation causeway, which enables greenhouse growers to easily access the Ambassador Bridge, opening the gate to United States marketplaces, was expanding.

Between the two points there is a glaring opportunity that, to date has not been utilized and one, which local greenhouse operators hope to tap into in the very near future.

Windsor and Essex County have, for decades, produced some of the finest vehicles in the world and with that comes a remarkable amount of technological know-how.

An interesting question is beginning to bubble to the surface in the region – if innovative technology is available to make cars and trucks, why can’t that knowledge be transferred to the greenhouse sector and build necessary automation systems?

“It’s not for a lack of desire or will to make this a reality. It takes time,” says Aaron Coristine, Manager: Science, Regulatory Affairs and Government Relations for the Ontario Greenhouse Vegetable Growers, based out of Leamington, Ontario.

Growers in the area have always looked outside of North America to provide the necessary technology to automate irrigation, ventilation, cooling and heating and Coristine and the OGVG seem confident that the resources to research and develop and build what they need is just down the road.

He says the idea has been explored and that, “the question has been asked on both sides. There is a mutual interest to collaborate and create something,” he adds.

He says that local greenhouse operators want to partner with local manufacturers especially with resources in the immediate area.

Bridging the gap between the agriculture and automotive sectors is in the future it seems, but not just yet.

Connecting the two – automotive technology specialists and greenhouse operators, has got the attention of WE Tech Alliance, a think tank of sorts that specializes in bringing partners together not only in the Southwest Ontario region but globally. It is one of the groups that are looking into bringing the automotive and agriculture sectors together.

According to WE Tech Alliance Director of Venture Services Adam Castle, the fact that more and more vehicles are going electric and less parts are being made in Windsor-Essex, could be a factor in whether or not automotive manufacturers and greenhouse operators begin to form working partnerships.

“Our manufacturers have not been traditionally asking, how do we get into this (agriculture) sector,” said Castle.

And while greenhouse growers continue to get their automation technology primarily in the European markets, that does not mean they aren’t open to the possibilities.

“To move an industry from buying imported goods to a domestic good is not a quick process. So, what we are doing is identifying the greenhouse growers we have good relationships with,” notes Castle.

Perhaps the biggest obstacle that greenhouse operators in Windsor-Essex face is that since they are constructing new operations at a quick pace, the time to redefine how they do things is nearly impossible and as Castle points out, “if it’s not broke, why fix it.”

“I think you will see a whole lot more of it in five years and ten years even greater numbers,” he said of utilizing home-grown technology. “There is a lot we have to get right in terms of mechanism.”

One of those is bringing as many players to the table as possible.

On May 11, WE Tech Alliance invited Niagara College’s Greenhouse Technology Network to a round-table discussion that was hopefully expected to attract both greenhouse operators as well as automotive manufacturers.

Greenhouse Technology Network, according to its website is, ‘a network of research-focused centre that collaborate small-and-medium sized organizations to advance the development, adoption and implementation of technologies to support the greenhouse industry.

Rita Sterne is the Project Manager for GTN and says that her group is not really concerned with what the crop may be, as long as it is undercover.

“We understand that the greenhouse space needs this technology and the advancements.”

What those advancements seem to be locally anyway, is, as Adam Castle from WE Tech Alliance points out, is having the technological know-how come from the area.

“Solving the technological challenges is a mountain but we know we can do it and it takes time,” says Sterne.

One of the local tech companies that WE Tech Alliance encourages to work with local greenhouse operators is Windsor’s Splice Digital.

According to President and Founder Brian Hendel, Splice Digital designs custom web technology to serve the needs of a number of businesses both in the United States and Canada, including greenhouse operators in the Leamington-Kingsville region.

When it first started exploring the possibility, Hendel says, “what’s here that we can look at as a business opportunity? We started to talk to OMAFRA (Ministry of Agriculture, Food and Rural Affairs), and the local greenhouse industry.”

After reaching out to the local greenhouse operators and finding out what their needs were, Hendel said that there was what he refers to as a ‘gaping hole’, in IPM (Integrated Pest Management) software systems.

“Because Leamington is only a few minutes away, we started making connections out there and said we want to talk to you and possibly solve the problem.”

Admittingly, Hendel said Splice Digital did not have a lot of knowledge about IPM, however, through local operators were able to get up to speed quickly, created what it calls Scotech. He said several large operations are now using their systems.

“We saw the need locally, but they are comparing our product against the Netherlands products.”

For three or four generations, local greenhouse operators have relied on technology outside of Canada and Hendel admits that ,“there is still a bias with the growers in that the Dutch do it better.” 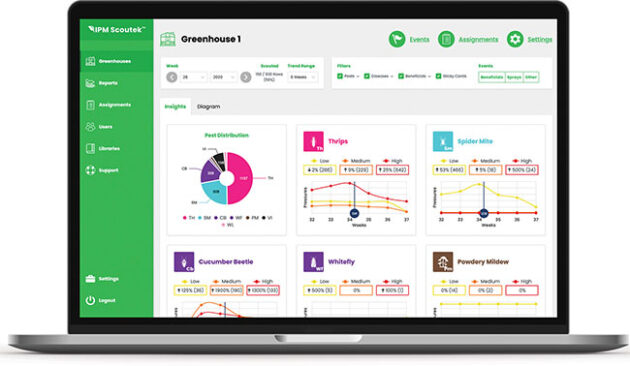 However, and what WE Tech Alliance believes strongly in, is that the know how to develop technology locally is in the future.

“Fortunately for the region we have strong manufacturing talent that produces automation systems that are better than what some of the greenhouses are thinking,” said Hendel.

And as far as what’s ahead for Splice Digital, the company founder and president is certain that Canada can be a tech leader within the greenhouse sector.

“We are pushing hard. We are going to the Netherlands, and we are trying to penetrate globally. It’s a matter of getting the word out,” said Hendel.

Another company that is on the cutting edge of being able to provide local greenhouses what they need is Durobyte Inc.

Branding itself as being able to develop custom automation machines, Durobyte Inc can build high technology products from the initial concept, through to design and right to the actual manufacturing.

Durobyte Inc Business Development Manager Patrick Thompson says they are working on a water jet system that can decap mushrooms and destem peppers.

“It’s one thing that we can do it, but we have to get their trust. We are not the only one doing it.”

Interesting about Durobyte is that they have a test facility and are able to invite greenhouse operators in to see, firsthand, what they can do locally.

Asked why the local greenhouse industry continues to get their technology outside of Canada, Thompson is quick to note, “everybody trusts the equipment from overseas and with trust comes purchase.”