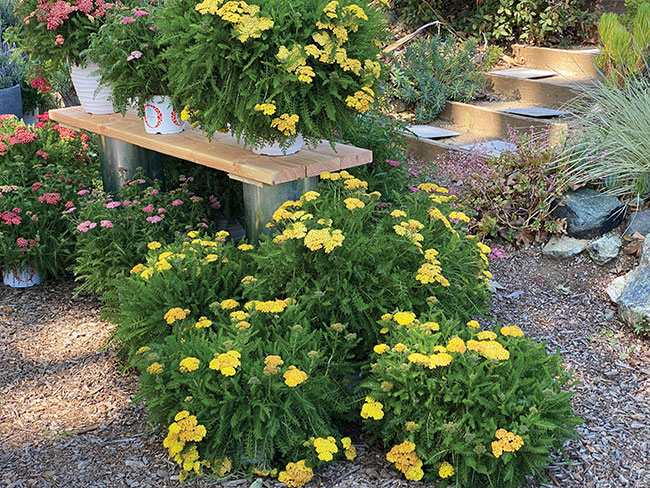 Many of the breeders visited at CAST have perennials in their stable of plant offerings. All the perennials I’m going to talk about in this article are first-year flowering and can perform double-duty as long-flowering container plants that can be planted in the landscape. Winter hardiness will vary with cultivar and if present, the Hardiness Zones listed will be from the USDA scale, since that is the information that is readily available.

Achillea millefolium
New to the Skysail series from Dummen Orange is a yellow colour. Skysail yarrows produce many small diameter inflorescences instead of one large inflorescence as is typical with A. millefolium. When Skysail blossoms fade, they do so in a pleasing fashion without developing a “dirty” grey-brown colour.

Delphinium
The Delgenius series from Pacific Plug & Liner (PP&L) has three new colours. The earliest to bloom in the group is Blue Fabulosa, Neva has a pure white bloom and Chantay a pink bloom. This series is available for fall or spring planting from a 72 liner. This series is propagated in tissue culture and is known for its sturdy plant and free branching. Hardy to Zone 3.

Darwin Perennials has a showstopper of a delphinium with its new Red Lark release. Its bloom is a coral red in colour. The flower’s stalks are very sturdy indicating the ability to handle shipping well. Above all, this cultivar is unique looking and captured my attention even in the pouring rains as I toured the Darwin display at CAST.

With seed-produced delphiniums we have a new colour in the Delphina series from ThinkPlants/Syngenta Flowers. White with Black Bee with a white flower and a black central tuft of petals that with a little imagination can be said to be in the shape of a bee.

Dianthus
Greenfuse Botanicals has introduced a new hardy dianthus called Constant Cadence Potpourri that produces multi-coloured blooms (fuschia, rose, pink) from just one plant that looks good from bud break through to senescence. It is hardy to Zone 4.

Echinacea
Darwin Perennial’s Sombrero Poco series is the compact cousin of the Sombrero we are familiar with. This year red, hot pink and white colours join hot coral to help fill out this series. For crop scheduling, it can easily finish in a 1-gal. pot in one week. Hardiness: Zones 4 to 9

Kieft Seed has released a yellow colour for its Artisan F1 series of seed propagated echinacea. Soft Orange and Red Ombre are already in the marketplace. In the pipeline are white, burgundy, deeper red and scarlet. Release dates for these latter colours will depend upon seed availability. This series has better branching over the OP cultivars in the marketplace. You can expect a seed germination rate of at least 85 per cent.

Benary introduced the seed propagated PollyNation Mix echinacea last year; this was a blend of different colours. This year the individual colours have been separated out into individual seed lots that include yellow, pink shades, orange/red, magenta and white. PollyNation seed is treated with Benary’s new BeGeen technology, which means the seed priming method is free of micro-plastics and chemicals. In case you were wondering, the “Polly” in the name is a reference to the pollinator friendliness of this plant.

Echibeckia
This unusual plant name arises from the intergeneric cross between Rudbeckia and Echinacea. It may be a stretch to call this plant type a perennial in Canada, but I have heard of successful overwintering in Zone 6 locations. In the Guelph trial locations (Zone 5), this plant has not overwintered reliably. That said, there is no denying that this plant has an amazing floral presence in containers. The Summerina series from Pacific Plug and Liner has a wide variety of showy cultivars. New this year are Summerina Swoop and Dizz. Before now, this series was only known for its large showy, single blooms in shades of yellow, orange and brown. Swoop and Dizz have smaller, semi-double flowers with lemon, peach and red shades hinting some coloration hinting at its Echinacea genetic roots. The vigor is suitable for finishing in a 10- to 12-in. pot.

Gaillardia
Dummen Orange has added a new colour to its Spin Top series: mango.  Spin Top gaillardia have been trialled for multiple years in Zone 3 as well as Zone 9 and can survive both extremes. The Copper Sun Mariachi gaillardia with it pleated petals has been rebranded to Mariachi and more colours in that flower form will be introduced soon.

Iberis
White Shadow is new from Dummen Orange and is said to have the largest inflorescence diameter of its type in the marketplace. It has a pure white blossom colour with bloom naturally occurring in early spring. It has a mounding habit and is perfect for quart- or gallon-sized containers. Hardiness: Zones 3 to 9.

Lithodora diffusa
New from ThinkPlants/Syngenta Flowers is Lithodora Tidepool Sky Blue. This spring blooming perennial is hardy from Zones 5 to 9. The flower is a true-blue colour with a tidy growth habit and bloom coverage over the entire plant without developing the centre bare spot that is common with this species.

Penstemon
New to the Pristine penstemon series from Dummen Orange are three new colours: Nightshade, Princess Pink and Primrose. This series is an attention getter with its broad range of colours and the pollinators love it, too! It has a compact branching and first year flowering habit that can easily fill a gallon container from a spring cutting.

Rudbeckia fulgida var. sullivantii
Goldblitz from Kieft Seed is one to two weeks earlier finishing than Goldstrum and has a higher bud count as well. It is first year flowering from seed (85 per cent germ) and growers can finish this crop under natural daylength conditions. Hardiness: Zones 3 to 9.

Of course, there were many more new perennials presented at CAST than what I showcased here. I encourage you to search the catalogues of the breeders listed here to learn about their other offerings. One thing that is clear to me is that the breeders are doing an amazing job of developing perennials that are versatile for use in containers and the landscape and for forcing for unusual seasons of production. The next and final article in the CAST2022 series will focus on edibles. Thank you to Greenhouse Canada magazine and Ball Horticulture for their support on this CAST trip.