Landscape and container trials reveal standouts in each category. 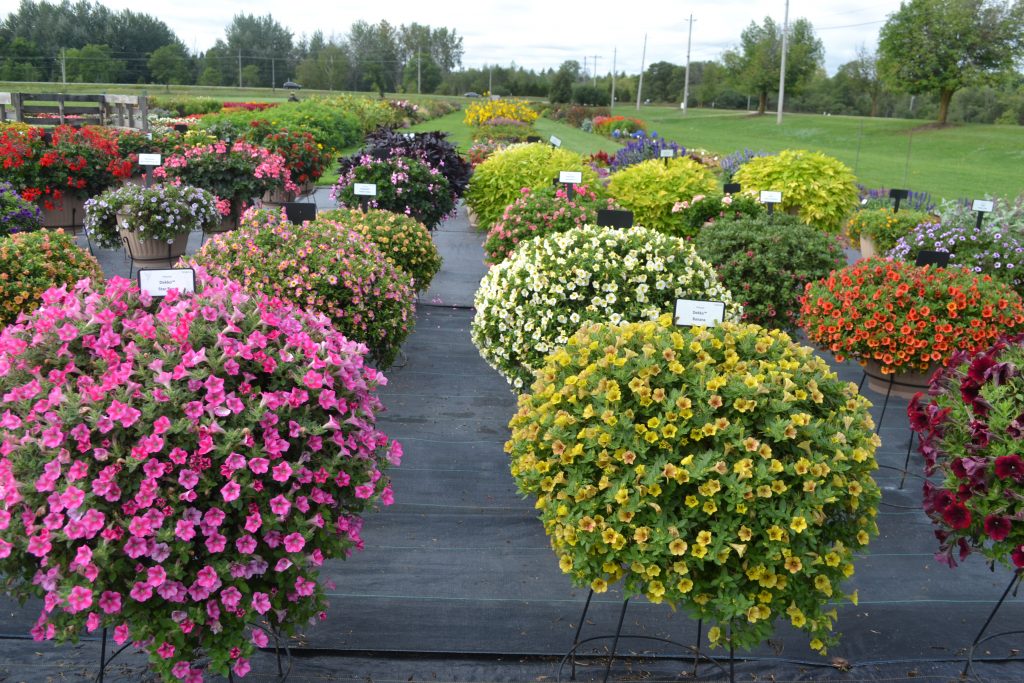 It is fortunate that plants can always provide us with moments of pleasure and joy in the face of pandemic gloom and uncertainty.

In spite of COVID-19 restrictions and protocols, the University of Guelph was able to host a small open house at the Landscape Ontario and Guelph Turfgrass locations during the second week of August in 2020. Approximately 520 annuals and perennials were trialed in beds and containers, where appropriate.

In this article, I will highlight particular plants which exhibited unique ornamental displays and above average garden performance in the 2020 trials. The elevated temperatures of early summer, in combination with spotty, but at times intense rain and wind, had a significant impact on the performance of each individual trial entry.

Measuring 28 cm high and 100 cm in spread, Supertunia Mini Vista Pink Star [1] had the same vigour as others in the Mini Vista series with mounds of pink striped, white blooms. Supertunia Lovie Dovie had a similar colour and star pattern to Mini Vista Pink Star. When planted alongside each other, Lovie Dovie had a noticeably whiter hue than M.V. Pink Star, which may be of potential interest to landscape and container designers. 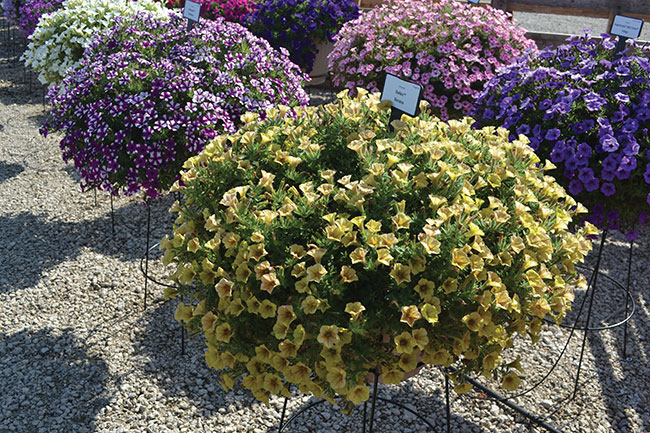 Dekko Banana [2] had deep yellow blooms, sometimes with hints of orange. Trailing stems reached lengths of 80 cm by summer’s end in containers. The bloom on Dekko Banana rebounded well from pounding rains, and sometimes exhibited a cupped bloom shape in response to stress.

In the medium-sized bloom category (4.5-6 cm diameter), of special interest were the Durabloom series from Dümmen Orange and Bee’s Knees from Ball.

First introduced in 2019, the Durabloom series continued to show resilience in the face of challenging climatic conditions while introducing new colours to the marketplace. The colours Watermelon [3a], Hot Pink and Purple [3b] showed very well in our 2020 trials in both containers and landscape. Expect a mounding habit in the garden with heights ranging from 20 to 30 cm and spread of 50 to 80 cm.

Bee’s Knees [4] from Ball FloraPlant received a lot of media attention in the past months and for good reason. Some of its key features include climatic resilience and a deep yellow colour that doesn’t fade as the bloom ages. In a separate container trial, we compared Bee’s Knees with two other “yellow” petunia cultivars. Bee’s Knees exhibited noticeably better drought and rain tolerance than the comparisons. Our observations would also suggest that the yellow colour deepens with cooler temperatures later in the summer. With Bee’s Knees, expect canopy heights ranging from 20 to 30 cm and spread of 50 to 90 cm by the end of the summer. 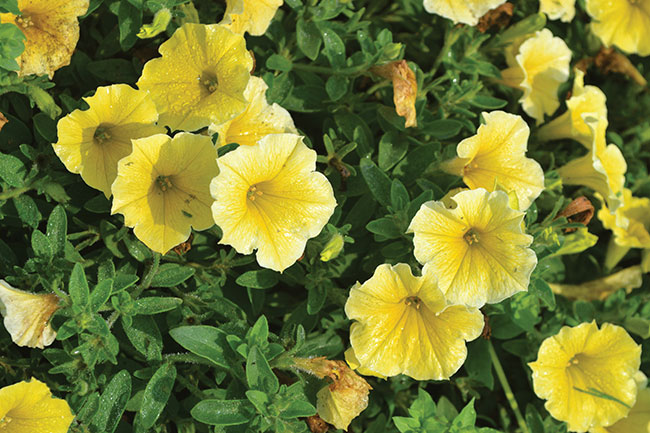 The new Caldera series of interspecific geraniums from Syngenta caught a lot of attention from trial garden visitors in the containers and in landscape. The colours trialed were red, pink, and salmon [5], and all displayed ivy-like foliage and self-cleaning flower heads. Measuring 40 cm high by 70 cm wide, the loosely upright growth habit made it suitable for both container and landscape applications. Individual bloom diameters were ~5 cm and the overall inflorescence was 12 to 14 cm. Caldera demonstrated good heat tolerance and bloomed well all through the summer.

Another Syngenta geranium offering was Rosalie Antique Salmon [6] with its double, rosebud-shaped bloom. The individual flowers had an average diameter of 4 cm and cluster diameter of 9 cm. Its overall vigour was moderate with flower heights of 27 to 40 cm and plant spread of 30 to 40 cm. This plant seemed to perform best in the container trial compared to the landscape trial.

Many days in June and July exceeded 30°C, allowing heat-loving plants such as the zinnia to truly show their magnificent bloom potential. 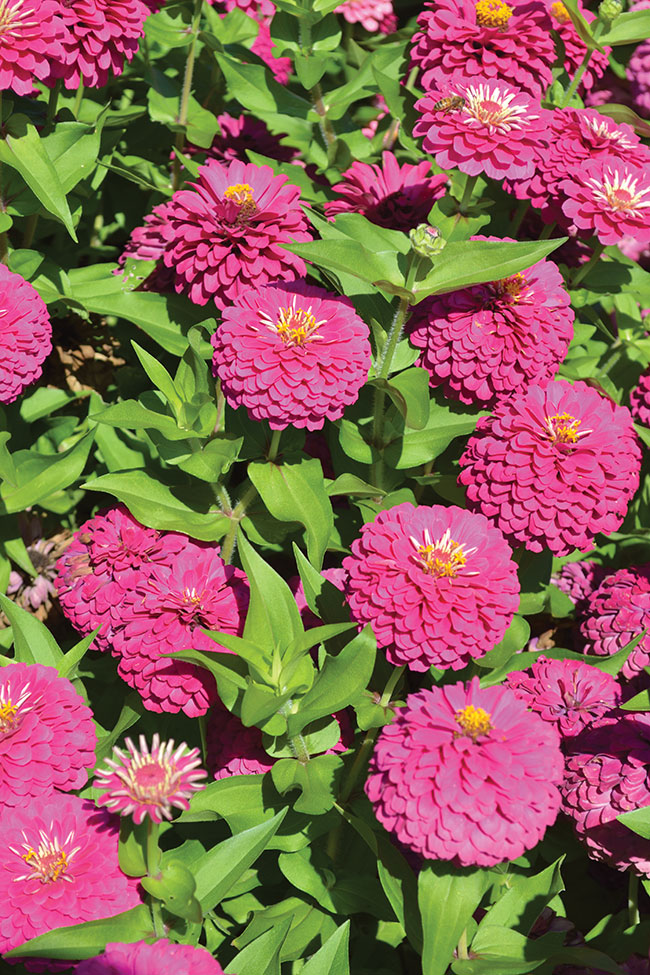 With a spectrum of eight different colours, the Preciosa [7] series of Zinnia elegans from American Takii was a highlight wherever it was planted in the landscape. The colours in the series were well-matched in bloom time and growth habit. By the end of the Ontario growing season, its dimensions in the landscape were 60 cm high by 60 cm spread. Like most members of the Z. elegans species, powdery mildew became evident late in the summer as nighttime temperatures dropped, but the disease did not take away from the show of blooms that lasted until the killing frost. Bloom diameter for this series ranged between 7 and 8 cm.

On an exciting note, All-America Selections (AAS) announced its most recent Gold Medal winner, and the first since 2004. An AAS Gold Medal winner will have received the highest marks possible from a majority of AAS judges across Canada and the United States. 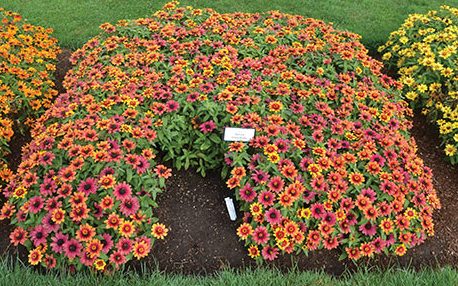 The winner is a new addition to the Profusion zinnia series by Sakata. Profusion Red Yellow Bicolor [8] was entered into the 2020 AAS ornamental seed judging trial, which included the Ontario judging sites at the University of Guelph and William Dam Seeds. The newly opened flower petals have a dark red centre and a contrasting dark yellow perimeter. What makes this bloom so unique is that, as it ages, the young petal colours transition to shades of pink and salmon. From our observations in Ontario, it would seem that the colour change in older blooms is intensified by cooler, late summer temperatures. Like all members of the Profusion series, it is resistant to powdery mildew and has a growth habit well-suited for container and landscape applications; garden heights reached 34-39 cm with 33-48 cm spread. This zinnia selection also received the 2022 Fleuroselect Gold Medal award.

Brainiac from Benary is a new series of dwarf cockscomb celosia. We trialled four individual colours in the series: Raven Red [9a], Lightning Yellow [9b], Think Pink and Mad Magenta [9c]. Although not trialled in 2020, Robo Red is also available as a single colour, and the colour Orange is available as part of a seed mix. The creative naming of the series and of the colours will certainly help with marketing, but so will its container performance. In containers, this entry was a standout and picked as a favourite of those visiting the 2020 open house. Because of its diminutive size at 15 to 20 cm in height and width, this celosia seemed to get lost in our landscape plantings, and rain-splashed soil further diminished its ornamental value. In contrast, this compact habit was  well suited for container applications.

The Sol series of celosia from PanAmerican Seed offers a different ornamental experience where the foliage is the focus, at least in the early part of the season. We trialed Sol Gekko Green [10a] (2021 Fleuroselect Gold Medal winner) with its green and dark purple bicoloured foliage, as well as Sol Lizzard Leaf [10b] which developed deep red wine foliage in full sun. The upright growth habit, balanced branching and semi-glossy leaves make for an attractive foliar addition to a sun garden or as a container component. Garden heights were in the 45 to 55-cm range with similar dimensions in spread. Flowers did eventually emerge on both Sol selections in August, but the foliage continued to have ornamental dominance into September. The Sol series performed well in both containers and the landscape.

The addition of White Green Leaf [11] to the BIG series of Begonia benariensis from Benary is of special note for the coming season.

Until now this large, vigorous waxy leaved begonia series with versatility in both shade and sun locations had a limited flower colour palette. Flower options ranged from red to various shades of pink, paired with bronze to greener leaves. This new addition displays white flowers among true green leaves, even after full sun exposure, furthering the potential for landscape design in the BIG series. Container-grown trial plants for this cultivar reached almost 55 cm in height by mid-October. In the landscape, trial bed heights were closer to 40 cm with a similar spread. 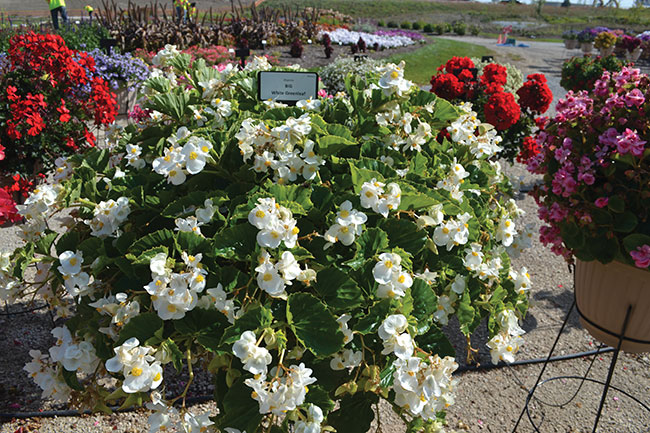 New salvia releases are always of great interest because of the genera’s typical tolerance to drought and heat, as well as its appeal to pollinators.

Lancelot [12], a new Salvia canariensis from PanAmerican Seed has all of these attributes along with some unique foliage for the salvia group. Lancelot’s triangular leaves with soft white hairs produced a grey appearance that dominated the first half of the summer. As the season progressed, lavender-coloured blooms appeared above the foliage. This selection is suitable for both container and landscape applications. Expect the flowering stalks to reach garden heights of at least 72 cm with similar spread for the foliage. 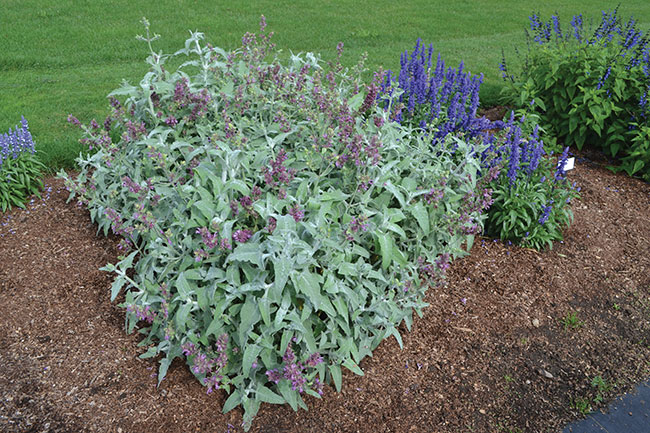 Open house week is planned for August 9-13, 2021 at the trial gardens in Milton and Guelph, with a formal Open House date set for August 12. We hope you can visit to see the 2021 offerings for yourself.

Rodger Tschanz is the trial garden manager for the University of Guelph and Landscape Ontario. For more information about the trial plants and trial program, contact Rodger at rtschanz@uoguelph.ca

Related
Floral attraction in the gardens
A second look at this season’s showstoppers
Top annuals named for 2020/21 in Canada
A taste of unique, new edibles