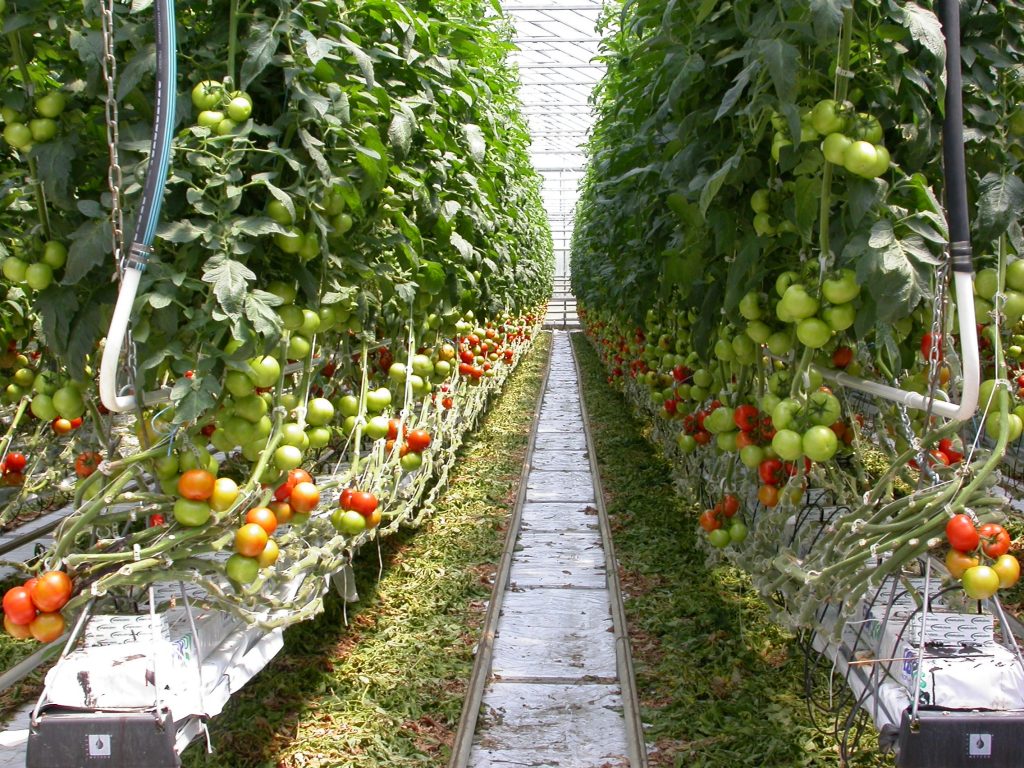 Grow pipes – small diameter heating tubes that run through the crop canopy and can be adjusted as the crop grows taller – are becoming an increasingly popular energy optimization system for vegetable growers in Canada.

While grow pipes are considered expensive, they have been shown to increase fruit temperature, reduce the humidity inside the crop canopy (which in turn reduces the incidence of Botrytis) and increase fruit yield without increasing energy consumption. However, proper placement of the pipes is critical.

Dr. Xiuming Hao of the Agriculture and Agri-Food Canada (AAFC) Greenhouse and Processing Crops Research Centre (GPCRC) in Harrow, Ont., and Shalin Khosla of the Ontario Ministry of Agriculture, Food and Rural Affairs, which is co-located at the centre, are world experts on grow pipes. According to Khosla, there were no greenhouse vegetable growers in Ontario using grow pipes 10 years ago, but their use today (almost all on tomatoes) totals about 166 acres. This represents approximately 16 per cent of the total greenhouse tomato production area in Ontario.

Grow pipes are much more suited to vegetables than potted ornamental crops because vegetables are tall crops with a lot of canopy. “To prevent heat loss to the greenhouse roof, the grow pipe needs to be fully covered by crop canopy,” Hao explains. “In-floor heating systems for potted ornamentals can play a similar role for ornamentals as grow pipes do for vegetable crops.”

Hao began his grow pipe studies at the GPCRC on greenhouse tomatoes because the raised-gutter production of this crop has become very popular in Ontario. “Compared to conventional greenhouse tomato production on the ground, this system changes the microclimate profile in the greenhouse,” Hao explains. “The growing media and crop canopy are further away from the floor heating pipes, which can lead to more heat being needed in order to maintain adequate plant microclimate and to prevent pathogen infections. Grow pipes mitigate this need for more heat, but must be placed properly.”

At the GPCRC and a commercial tomato greenhouse in Ruthven, Ont., in 2004 and 2005, Hao and his colleagues tested how grow pipe placement affects plant microclimate, incidence of Botrytis, plant growth, tomato yield and energy consumption. The project, which was supported by the Ontario Greenhouse Vegetable Growers (OGVG) and AAFC’s Program on Energy Research and Development, found that pipes placed at 55 cm or 150 cm above the raised gutter in the centre of a double row of tomato plants improved microclimate, reduced the incidence of Botrytis, and increased early and total fruit production compared to plants grown without pipes. “Since grow pipes at 55 cm had the higher early and seasonal total fruit yield (3.2 kg m2 or a six per cent increase) and required less energy consumption than those at 150 cm (2.1 kg m2 or a four per cent increase) we concluded that this placement location is better,” Hao adds.

“Most of the yield increase with grow pipes was in the early production period,” he explains. However, “the grow pipe can’t be used too early when the plants is very small just after planting in December. More energy could be used if the crop canopy has not covered the grow pipe yet, but once the grow pipes are covered by the canopy, energy use should be the same or less.”

He adds that in the fall when grow pipes instead of ground heating pipes were used for greenhouse dehumidification, about 10 per cent energy was saved, and the monthly average humidity in crop canopy was reduced by about five per cent. “That reduced incidence of Botrytis,” he notes. “For example, in July the incidence in the grow pipe section was only between three and four per cent, while it was 12 per cent in the control section.”

Further development in heat placement and energy conservation were evaluated by Haoand his colleagues in 2005. They devised a second set-up called new heat placement by placing the main heating pipes underneath the raised trough. “This way, the heat is forced to go through the canopy to warm up the plants instead of the air, and that’s important because it’s the plant temperature that directly affects plant growth.” Hao notes that this set-up is especially useful for greenhouses that still have a steam heating system, because steam pipes can be placed underneath the raised trough and used as a second stage of heating. This new heat placement increased early fruit yield without more energy use.

In 2008 and 2009, Hao also did research (again supported by OGVG and AAFC) on the use of grow pipes in mini-cucumber production. “We compared the use of a 2.1 cm diameter grow pipe placed just below the harvesting fruit to no grow pipe heating, and found that having the grow pipes significantly improved fruit yield,” Hao says. “Marketable fruit yield (Jawell and Picowell averaged) with grow pipes was 16.3 kg/m2 and without, 14.56 kg/m2.”

Challenges to adoption, and options

Grower desire for energy efficiency will lead to more grow pipe adoption in the future. John Lelie, owner of Enertec Mechanical in Beamsville, Ont., agrees. “Grow pipes do not usually produce enough heat for the entire greenhouse during winter months,” he says, “but their use can boost boiler efficiency. By using grow pipes with a flue gas condenser, the boiler doesn’t need to be set so high. A lower temperature of the stack means more heat is pulled from the stack and efficiency is increased.”

Enertec has worked on two greenhouse projects where the dual rail transport and heating system was removed, and two sets of grow pipes were placed close to roots and near top of canopy, as Hao has researched. This system is able to heat the cucumber plants adequately during the winter months. “Cost return is not determined with these projects, but both operators feel they can grow a better product, and more cucumbers,” Lelie says.

He adds, “A lot of people heat their greenhouses with steam, and say therefore that they can’t have grow pipes because they have no hot water. However, if they implement a flue gas condenser, they can have grow pipes, and recover CO2 from that (saving on liquid CO2), while increasing boiler efficiency about 12 per cent.” He says that cost return in this situation is achieved in three to five years, depending on CO2 and fuel costs.

Hao believes grow pipe use will become more widespread. “The price for grow pipes has increased and much experience and skills are required to use them properly,” he notes. “However, there is a great deal of knowledge now about grow pipes. Talking to the experts and visiting the facilities where grow pipes have been used is always a good place to start.”