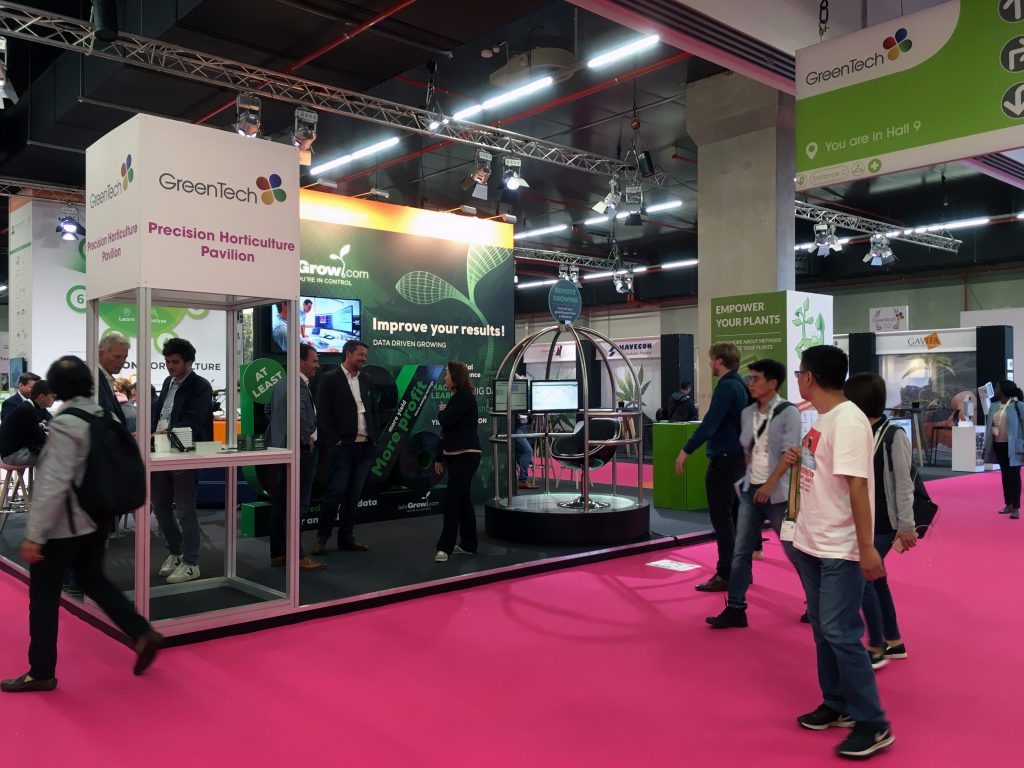 GreenTech showcased horticulture products and solutions, hosted sessions on cutting edge topics, and took an in-depth look at technology of the future.

Last week, GreenTech 2018 concluded a successful three-day trade fare in Amsterdam, The Netherlands. The event brought together around 10,500 professionals from the horticultural sector. More than half were international guests visiting from 112 countries. A large portion of visitors came from Canada, Japan and Belgium. The show featured 477 exhibitors, making it one of the top meeting places for horticultural technology professionals in the world. This year, the key theme was “Insights for the next decade.”

Canadian participation on the rise

GreenTech 2018 organizers noted a rise in Canadian participation, not only as exhibitors, but also as visitors. This should come as no surprise, since Canadian greenhouse growers increasingly turn to the Dutch for both technical expertise and technology to improve production in Canada.

While the trade fair’s exhibitors were predominantly Dutch, several Canadian companies showcased their technology as well. Montel Inc., manufacturer of high-density storage systems, for instance, exhibited their products to potential customers. Having only entered the vertical farming market three years ago, Vice President of International Sales Jean-Pierre Doucet said the trade fair provided a great opportunity for the company to reach new European clients. Production space in Europe comes at a premium, a factor that makes their high-density solutions particularly attractive abroad.

Aurora Larssen Projects (ALPS), a British Columbia based greenhouse designer, also exhibited their wares. Aurora Larssen specializes in the design of cannabis facilities. Company analyst and project manager Paul Haskins said there has been growing interest in the sector in the last few years. Attending Greentech gave Haskins an opportunity to put faces to names, but he found the broad mix of vendors especially impressive.

“This is an incredible event, especially for a Canadian company,” he said. “We started this collaboration between Canada and the Netherlands because, as you know, the Netherlands is quite a leader in the horticulture industry and it was quite natural for us to want to work with the epicenter of the knowledge.”

“I’m pretty certain that Canadian growers will benefit from this international collaboration,” he continued.

Much to Miresmailli’s surprise, his company’s design, the Iris! Scoutrobot, was the winner of an innovation award. Iris! Scoutrobot is a robot with sensors mounted to a self-propelled trolley that operates autonomously in greenhouses. The robot detects diseases, pests, deficiencies and other plant abnormalities at an early stage. It provides accurate fruit count and colour assessment, and detailed climate and environmental information.

“This is extremely prestigious, you know,” he said. “As a Canadian company to receive a Dutch award, it’s quite a big thing. It doesn’t get any better than that.”

The GreenTech Sustainability award went to the Van der Ende Group for the Poseidon Sodium Extractor, a water treatment system equipped with a reverse osmosis system that extracts sodium from drainage water with maximum retention of valuable nutrients.

Finally, the jury unanimously selected Visser Horti System’s Autostix as the winner of the GreenTech Award 2018. Autostix is a new system that automates the planting of cuttings, helping to increase the efficiency of nurseries and ornamental operations. The jury felt it was a commercially successful innovation that featured strong technology and could be a real game changer for the horticultural sector.

GreenTech is working closely with AVAG Greenhouse Technology Centre, the association of the Dutch greenhouse construction and technology sector. The trade fair has been such a success that organizers have decided to make it more regular. Previous to this, GreenTech was a biennial event. Starting next year, though, it will be an annual show.

“The greenhouse technology market is booming worldwide,” said Harm Maters, chairman of AVAG. “That is why a robust trade fair is needed in the Netherlands as a marketing instrument for the entire international horticultural sector.”

“An annual event where business, knowledge, and social trends are discussed and practical examples are highlighted,” he continued. “The DNA of the worldwide horticultural sector consists primarily of meetings, exchanges and trade.”

GreenTech showcased horticulture products and solutions, hosted sessions on cutting edge topics, and took an in-depth look at technology of the future.