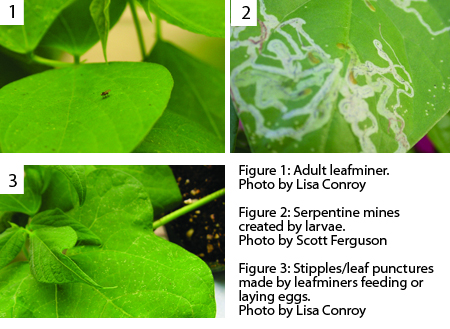 The American serpentine leafminer (Figure 1) is a pest of chrysanthemums and gerbera daisies. The larvae produce small serpentine or winding mines (Figure 2) in the leaves, and adults make small punctures in the leaves when feeding and laying eggs (Figure 3).

Leafminers were considered a major pest in Ontario greenhouses in the late 1970s and early 1980s. Since then, effective insecticides have kept them under control. However, in 2004, some growers began reporting failed control of leafminers using registered insecticides (Citation® and Avid®). This could be observational evidence that a new insecticide resistant strain of leafminer has accidentally been imported from the United States on contaminated propagation material.

Flowers Canada Ontario (FCO) is currently funding research at the University of Guelph to determine if these difficult to control leafminers are resistant to all the insecticides registered for their control. A survey was sent out to all chrysanthemum and gerbera growers who are members of FCO or who were listed in the Ontario Greenhouse Growers’ Directory & Buying Guide in 2005 and 2006. The goal of the survey was to understand the extent of the leafminer problem in Ontario so that an effective Integrated Pest Management (IPM) program, that includes biological control agents and compatible reduced-risk insecticides, can be developed to control this pest and to decrease the incidence of insecticide resistant leafminers in the future.

THE SURVEY
The survey was simplified to encourage completion and consisted of one page of questions. Respondents were asked:
•    What type of crop they grow
•    The size of their operation
•    To rank the severity of leafminer as none, minor, moderate, or serious pest in their operation presently and/or in the past (Minor – occasional pest/can be kept under control, Moderate – pest is often present but can be controlled, Serious – pest is often present and is hard to control)
•    To estimate their crop losses in the past year (2006) due to leafminers
•    Whether they use insecticides for leafminer control and which ones
•    Whether they have observed insecticide resistance
•    Whether they use biological control agents for any pest in their operation.

SURVEY RESULTS
Pest Status: The results are based on a survey return total of 32, or 34 per cent of the total number sent (94). The total greenhouse production area represented by respondents was 46.4 ha, combining both potted and cut chrysanthemums and gerbera. Forty-seven per cent of respondents ranked the severity of leafminers as non-existent, 28 per cent as minor, six per cent ranked the pest as moderate, and 16 per cent ranked leafminers as serious. No relationship was seen between the severity of leafminer and the type of crop (cut vs. potted, chrysanthemum vs. gerbera).

Resistance: Twenty-two per cent of respondents had observed insecticide failure with respect to leafminer control; 57 per cent of these responses came from growers experiencing serious leafminer problems. One respondent indicated that none of the insecticides they applied controlled leafminers, and many growers had experienced insecticide failure following applications of Citation and Avid. A few respondents indicated that clean propagation material was the only sure way of controlling leafminers.

WHAT DOES THIS MEAN FOR GROWERS?
Once leafminers are accidentally imported in propagation material and established in a greenhouse, they can be a serious pest of chrysanthemums and gerbera and may not be easily controlled with currently registered insecticides. Biological control is a good alternative to insecticides, but may not be enough to control a serious leafminer infestation on its own. An IPM program that combines both biological control and compatible reduced-risk insecticides could greatly benefit growers experiencing serious leafminer damage and insecticide resistance. Research to establish this effective combination of control tactics is currently underway at the University of Guelph and is funded by FCO.

ACKNOWLEDGEMENTS
Funding: NSERC IPS industrial sponsored by FCO and CORD IV funding to FCO. Thanks to all the growers that participated in the survey.