Tight management pays off when keeping aphids and mealybugs in check. 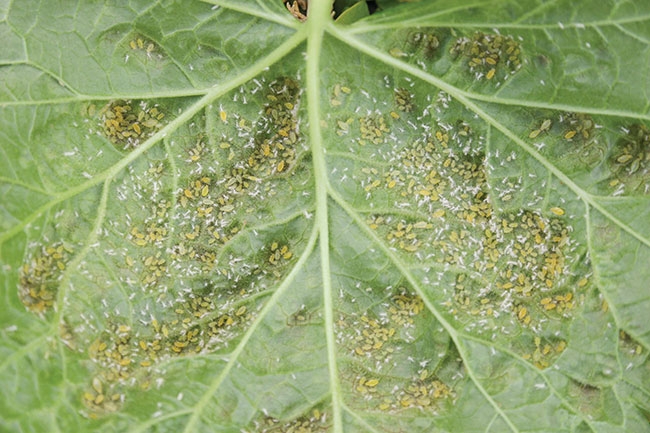 Aphids are among the biggest challenges facing greenhouse growers. While aphids respond well to systemic insecticides, mealybugs do not. Photo credit: Raymond Cloyd

Greenhouse growers need to be rigorous managers if they want to stay ahead of aphids and mealybugs.

The two phloem-feeding pests are among the biggest challenges for growers, who face a dwindling number of pesticides for knocking down populations once they become established.

Both aphids and mealybugs have piercing, sucking mouthparts that feed on the vascular tissues of plants. The two often have a symbiotic relationship with ants, which love the honeydew the bugs excrete – so much so that ants will protect mealybugs from danger.

“Whenever you see ants on plants, you know that you have a phloem-feeding insect,” says Raymond Cloyd, PhD, a professor in the department of entomology at Kansas State University and an extension specialist specializing in pest management and plant protection. “So if you’re going to do biological control of phloem-feeding insects, it’s imperative that you control the ants before you make any releases of any natural enemies.”

Keeping nitrogen applications in check is also a form of natural control. Aphids seek plants high in nitrogen, so less nitrogen means more pest control. Careful management of nitrogen will also lower input costs, ensuring the plant has just what it needs without the excess that attracts freeloaders, such as mealybugs, aphids and, in turn, ants.

However, it’s the management of spray regimes that are most important, both to ensure effective control of the pests as well as to avoid fostering resistance to pesticides in the bugs.

“When you’re dealing with mealybugs, it’s no different from thrips, spider mites and aphids. You have to rotate materials with different modes of action,” Cloyd says. “We have a lot of good materials, but [you need] proper application.”

MEALYBUGS: THE NEXT BIG PEST THREAT
Of all the phloem-feeders, Cloyd believes mealybugs pose the biggest risk to greenhouse growers.

“The next big pest of the 21st century are mealybugs,” he told growers attending the annual horticultural short course at the Pacific Agriculture Show in Abbotsford, British Columbia, earlier last year.

Cloyd discussed five key species growers should know about, including:

A number of characteristics make mealybugs hard to identify until it’s too late.

The bug shows an affinity for plants with a complex architecture, which allows them to hide until they’re impervious to insecticides. Their lifecycle is also among the longest of all greenhouse pests, running from 25 to 60 days at the very ambient temperature of approximately 24 degrees Celsius.

“How do I get rid of this critter once it’s established? Once you have it, there’s not very many options,” Cloyd says. “There are no silver bullets for mealybugs.”

MEALYBUG CONTROL
One of the biggest obstacles to controlling mealybugs is a lack of effective systemic insecticides, which the insects ingest when feeding on plant tissues.

“We can’t recommend systemics for mealybugs, or at least the ones we’re testing, because we’re not getting sufficient mortality – or mortality that you will accept,” Cloyd says. “With mealybugs you need to reach over 80 per cent mortality to break up the generations.”

What are effective, however, are contact insecticides, which work best on the first instar before the larvae begin feeding and acquire a waxy, impervious coating. Insect growth regulators are also effective by preventing the larvae from developing normally, leading to their death.

However, in both instances, several applications are necessary.

The importance of using high doses at regular intervals also boosts the need to rotate through materials with different modes of action to prevent resistance. Some older chemistries are no longer effective because the bugs became resistant to them; an effective rotation hits the bugs at a different point each round, reducing the risk of resistance.

However, sometimes plants just must be ditched altogether: “Once the plant is heavily infested with mealybugs, just get rid of it. You’re not going to save it at all. You’re going to spend more money trying to preserve it.”

Aphids are among the biggest challenges facing greenhouse growers. While aphids respond well to systemic insecticides, mealybugs do not.

APHIDS: ‘EXTREMELY POLYPHAGOUS’
Aphids, unlike mealybugs, respond well to systemic insecticides. However, they’re a challenge because they enjoy a wide range of hosts.

“Aphids feed primarily on the terminal growth,” Cloyd notes. “Aphids select plants based on two aspects: host quality, which is associated for fertility, nitrogen content, and the other one is secondary chemicals [which protect plants from pests].”

Aphids detect plants that produce lower amounts of secondary chemicals, and those that are high in nitrogen, and move in.

“You really have to be on top of aphids because they reproduce so dramatically. Some people think they’re an example of spontaneous generation, and in some cases it looks like that,” Cloyd says.

Rather than mating to produce, females engage in parthenogenesis, in which its offspring are genetic clones of the parent.

“In greenhouse situations there are no males, they’re all females, and those females can produce 100 offspring in 30 days,” he said. “And within a period of time, they themselves – because there is no need for reproduction in a greenhouse – can produce their own offspring.”

Within five generations, Cloyd says, a single female can give rise to 13,552,028 aphids.

CONTROLLING DISEASE
Getting the leap on aphid populations is extremely important, Cloyd says, because they’re notorious vectors of plant viruses.

“They are the biggest virus vectors in the insect world,” he explains, noting that green peach aphids vector more than 300 viruses.

The good news is that, unlike mealybugs, aphids respond well to systemic insecticides as well as contact insecticides.

The bad news is that the environment has to be tightly managed and spray schedules rigorously adhered to in order to achieve effective population control. Cloyd recommends spraying every five to seven days, and spraying well to ensure adequate coverage.

Different species of aphids distribute themselves differently in different crops. Melon aphids like terminal growth, for example, while green peach aphids prefer the middle of the plant.

Similar to mealybugs, ants have to be controlled. Moreover, weeds need to be eliminated, because they not only serve as reservoirs for aphids and the species can take advantage of their presence, but lambsquarters, bittercress, chickweed and oxalis harbour viruses that aphids can spread to the main crop.

“You can use insecticides and biologicals, but if you’re not implementing sanitation strategies, they’re not going to work very well
for you.”

Similar to mealybugs, Cloyd urges growers to take steps to prevent the bugs from becoming resistant to existing pesticide chemistries. With tighter controls on the materials available to growers, it pays to use the available tools wisely.

Cloyd suggests using compounds for two weeks at a time, rotating through four different compounds with different modes of action.

“Aphids are probably, next to thrips and spider mites, the biggest insect pest that can develop resistance to insecticides in a short period of time,” Cloyd says. “You have to rotate these insecticides with three different modes of action, or you’re going to get a population that is resistant to that mode of action.”