Some Canadian greenhouse operations continue to expand south of the border, while others postpone the move. 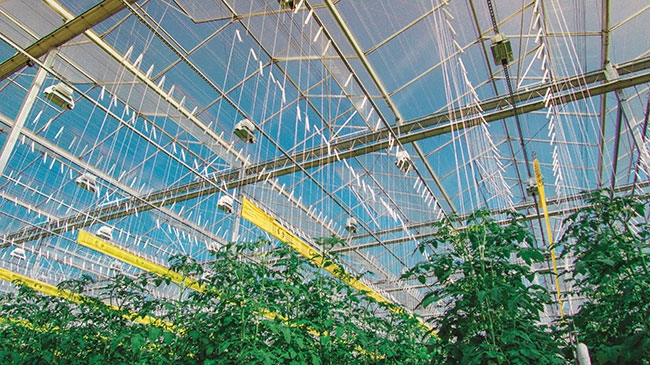 Industry expansion south of the border seems to have slowed for some Canadian greenhouse operators, but others are still building both domestically and internationally.

A few years ago, AMCO Group in Leamington, Ontario had planned to move ahead with an expansion in Florida, but has since decided against it. AMCO already has 17 acres of year-round cucumber production under HPS lights, and is planning to convert 13 more acres of existing greenhouse space similarly in 2019. “With increased costs of freight and the cost of business in general going up, we want to keep things centralized, so rather than building in Florida to help meet our year-round supply requirements, we are going to grow more here,” says AMCO sales and purchasing manager Mitchell Amicone. “The electrical capacity already exists, and we just need to install the new lights.”

Amicone says demand is strong for cucumbers and that they continue to work with many suppliers in Mexico to manage orders. “But sometimes during high-demand times of year, it can be hard to source produce from [other] suppliers,” he reports, “so having more of our own year-round capacity gives us more independence.”

In 2014, Kingsville-based Mastronardi Produce completed phase two of their 60-acre year-round operation in Coldwater, Michigan. Four years later, they announced phase one of a new build – a 71.6-acre glass greenhouse in New York for their Backyard Farms-branded tomatoes.

Leamington-based NatureFresh Farms also began building a 45-acre site in Delta, Ohio in 2014, but that has not stopped them from expanding domestically. “We are currently expanding 32 acres of HPS-lit crop in Leamington, Ontario that will start production in summer 2019, supporting our winter program,” says NatureFresh marketing project manager Kara Badder. “Our business growth has provided opportunities to expand our farms and focus on year-round growing in Leamington and Mexico.” There is potential for futher expansion in Ohio and elsewhere, she explains, as long as there’s demand.

Currently, Red Sun Farms based in Kingsville, Ontario, also has operations in Dublin, Virginia and in Mexico. “As an organization, we are always looking at expansion to better serve our retail, foodservice and [other] partners’ needs,” says spokesperson Leona Neill. “Although we are not prepared to formally announce any new projects at this time, don’t be surprised if you hear some growth announcements from Red Sun in the future.”

Red Sun Farms has always considered itself a North American company, Neill says. She adds that “the main reasons our facilities are strategically located across North America is to better serve our partners. Different locations allow us to plan produce production 365 days a year. It’s all about having a conducive climate when selecting a location with favourable growing conditions. In addition, this allows us to be in closer vicinities to key retailer locations.” Red Sun operates on a vertically-integrated business model. This approach helps them close the gap between grower, retailer and consumer, by controlling multiple aspects of the supply chain, from seed selection to shipment.

In 2017, Mucci Farms, also in Kingsville, completed their first phase of construction (24 acres) of a new 75-acre greenhouse in Huron City, Ohio. The entire 75-acre facility will be growing primarily tomatoes on-the-vine and some snack-sized specialty tomatoes. All the acreage will be equipped with supplemental HPS lighting for year-round production. The firm states on its website that “with such a high volume of our product already being shipped to the US, expanding into Huron was strategically done to improve efficiencies with logistics and food safety. Our proximity to market and avoiding a border crossing improves our opportunity to offer consumers with fresh, flavourful products with maximum shelf life.”

B.C. Greenhouse Growers’ Association executive director Linda Delli Santi remarks that some BCGGA members have expanded into Arizona, California and Utah. Some BC operators have moved into the US because it’s effective for year-round production, she explains. BC greenhouses export somewhere between 60 and 75 per cent of their provincial production to the US (peppers and tomatoes), and also export peppers to Japan.

As for expansion within BC, Delli Santi notes that there are many costs currently facing the industry there, such as minimum wage hikes that will surpass Ontario’s, a new health tax, and new issues and possible fees associated with the use of temporary foreign workers. Following a rupture of the natural gas pipeline in 2018, a shortage in capacity was discovered. Volatility in pricing has led to widely fluctuating costs of $3 per GJ to $203 per GJ, depending on the day, and this will likely continue for some time, she says. Currently running at about 85 per cent of its former capacity, potential projects are being discussed to increase pipeline capacity.

Pushed by higher costs
Ontario Greenhouse Vegetable Growers (OGVG) estimates that over the last six years, Ontario greenhouse businesses have invested upwards of $220 million USD to start additional operations in the US. OGVG general manager Joseph Sbrocchi hasn’t heard of any new announcements of expansion into the US or Mexico this year thus far, but would not be surprised if more materialized.

High energy prices in recent years have certainly been one factor in Ontario greenhouse businesses making investments south of the border, and Sbrocchi says input costs in Ontario still don’t compare to what’s available in many US states. In terms of natural gas, OGVG science & government relations manager Dr. Justine Taylor notes that “while Ontario’s Cap and Trade program has been revoked, without an alternative provincial plan in place, the federal backstop plan came into effect April 1, 2019 and imposes a carbon tax on the majority of fuel sources at $20/tonne CO2. After much discussion with the federal government, greenhouse growers will see targeted relief in the form of an 80 per cent reduction.”

Sbrocchi says it remains to be seen how this change will impact competitiveness on a global scale, but notes that “other changes made by the new provincial government, such as planned ‘red tape’ reductions and pausing additional minimum wage hikes, will also provide some needed relief for greenhouse operations here.”

In terms of future industry growth in the US, Mexico and Ontario, Sbrocchi believes the demand for greenhouse-grown produce will continue to grow in all jurisdictions. Indeed, OGVG reports that the greenhouse industry in Ontario has been in a construction boom for quite some time and it’s now ramped up, with greenhouse construction firms now being booked solid for the next two years.

However, the legalization of recreational cannabis has slowed the expected overall growth of acreage dedicated to vegetables to some extent, says Sbrocchi, and “the opportunity to construct new facilities is limited by many factors, including the ability to mobilize resources.”

Looking at the big picture of expansion, it’s Sbrocchi’s view that consumers’ desires for food produced locally, with a low carbon footprint due to short transport distances, is still at this point, not to be underestimated.

“So, that’s a plus for investing in various locations,” he notes. “To look at it from a balanced perspective; there are benefits to setting up on both sides of the border. There are many factors at play besides those already mentioned. We have better foreign worker access here than in the US, for example; but most importantly, the overall market continues to expand for our products.” For example, Ontario cucumber exports are higher than ever, and most go to the US.

Eliminating border risk
Andrew Morse, executive director of Flowers Canada Growers, does not have a clear sense of how many floral operations have expanded south, but notes that some farms have been “solicited” by US states. “Very few have fully moved operations, though some have expanded in the US,” he says. Reasons why a firm would start operations in the US, he adds, include reduction of cost plus a desire to increase market area and access to workers. “Moving eliminates border risk,” he says, and notes in addition that “southern climates can be beneficial to production of some plants.”

It’s difficult to predict, says Morse, whether expansion south of the border will continue and at what pace, with issues like the carbon tax making business in Canada more difficult. “Canadian flower farms have not invested in other jurisdictions as rapidly as other industries, but if policy decisions continue to put Canadian farms at a disadvantage compared to farms in other jurisdictions,” he says, “Canadian farms will continue to explore investment in other countries.”